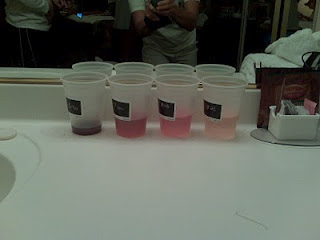 What a week. The Zombie Apocalypse is making news headlines. It's an election year and we're more interested in reading about people eating each others' faces than we are about the issues facing the nation and how to solve them intelligently. The Merikins continue to drink the zombie kool-aid (pictured here).

I'm feeling pretty snarky today. In fact, I feel extremely, dangerously, over the top snarky, and really bitchy too. I'm starting to wonder if these face-eating zombies might be perimenopausal women.

Just this morning in the grocery store parking lot, I was having a Towanda! moment. It was all I could do to keep myself from verbalizing the thoughts going through my head. "The world is being taken over by f***ing idiots!" People are completely OBLIVIOUS to what's going on around them.

I wanted to back up and smash into the driving school car that stopped behind me, basically, parked, just as I was trying to pull out of my parking space. It looked like the teacher and the kid were planning to park right there, at a 90 degree angle to me, just having a conversation, OBLIVIOUS to my reverse lights.

I'm older and I have more insurance. And furthermore, don't teach the kid to do stupid things in the parking lot. I was really tempted to Towanda! them. Instead I got out and walked toward the instructor's side of the car, finally she realized what they were doing and looked apologetic and made the kid move. Hel-lo?

By the time I got to back out of my parking space, then I had to deal with the clueless mom jabbering on her cell phone, walking with her two kids down the middle between the parking spaces, OBLIVIOUS to the cars that were trying to get in and out.

The past week or so I've been in a funk and it's most likely hormones, but I feel like I'm about to become someone else. Like somebody who walks the street downtown ranting and raving about whatever the voices are saying to them at the moment.

By the time I get home Tuesday nights, after two busy days at work and listening to a lot of people who need more than just IV therapy, there are times when I start to feel like I need therapy myself. I'm not even being sarcastic about that, there are some sad stories out there. Sometimes I can barely get away before the tears start rolling down my face.

What brings out the snark in me are the people who create their own problems and refuse to own their own crap, and try to blame everyone else for their victim attitude.

In the midst of the national paranoia about government taking action on something that might actually help us, someone is finally stepping up to take action. I'm glad to see it. Long overdue.

Our zombies who continue to eat recreationally with their own faces stuffed full of bad food, and allow the manufacture, advertising, and sales of bad food, in the face of an epidemic of fat kids who are growing into even fatter adults and soon will be getting IV antibiotics for their non-healing diabetic foot ulcers and having amputations at age 30, continue to lead sedentary lives hypnotized in front of the TV where they can be sold the next sugary excuse for food.

Someone is doing something about childhood obesity, and who ever would think it would be a huge entertainment corporation, but Disney is taking action. Soon there will be "Mickey Checks"- meaning if the product is mouse-approved, then it gets the thumbs up for advertising on Disney.

Recently I had an opportunity to try GoGurt. It's sold as a healthy snack for kids, but it's full of sugar. It's enough to gag anybody. That's why they call it Gogurt- because the kid goes on sugar until he crashes.

We'll see if this anti-obesity effort catches on, but good for Disney for being willing to make the first corporate move.

Time to stop bitching and talk about what I'm excited about. Number one, I just made all my reservations for my trip to Death Valley in July to be on the Badwater medical team again. I can't wait!

And next week we start the Double Mick.

Time to get busy packing, and maybe later I'll actually get my butt out the door and go running...
Posted by Alene Gone Bad at 12:23 PM

Hang in there. A long run would probably help.

Thanks Allen, I did a bike ride today. Not sure if it helped. But I have a few good runs planned next week, they should help clear the moths and cobwebs out. If I'm not certifiable by then.