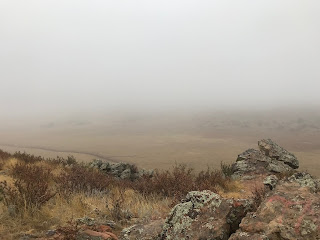 This morning I went running on Coyote Ridge with a group of women I run with regularly. It was spitting a light mist and everything was socked in- visibility was minimal. It wasn't very cold but I left the house without much extra clothing, a jacket or a hat, planning on not running more than 10 miles.

The trail was wet but not muddy, and I couldn't see the foothills around me, just shadows in the fog. It has a way of closing you in and protecting you.

It was precisely what I needed.

This past week was the week of the now and forever infamous Senate Judiciary committee hearings on the allegations of sexual assault by Christine Blasey Ford against Brett Kavanaugh, nominee for the Supreme Court.

It's been a week filled with talking heads, 24 hour news coverage, contention, hostility, anger, and ugliness.

I wanted to reach through the screen into that Senate hearing room, beyond the "female assistant" (WTF- she's a professional prosecutor, not your damn water boy), and throttle Chuck Grassley and the other senile fuck faces on the GOP side. I wanted to yell to Kavanaugh's wife, Run!!

We just saw the ugliness of power, of rich white male entitlement, on both sides of the hearing- on the Republican Senators side, and on Brett Kavanaugh's side.

I hadn't planned on watching any of it, I had work to do. I turned the laptop on before 8 am and saw a link to the live hearing, and clicked on it. And at 11 am, I was still in my bathrobe, with a cold cup of coffee sitting next to me, glued to the screen. I had to get out for an appointment so it was time to get dressed and peel myself away from the chair.

A little later I came back and managed to catch the part of the hearing where the prosecutor from Arizona asked Kavanaugh some questions, before they sent her packing.

I have some other blogposts I want to write, like about my 12 hour run last weekend, and my current challenge with having decided to go off statins, but this whole political nightmare has pretty much consumed my focus since the middle of last week. I'll get to those other topics later, but for now...

So much I want to say, but in a way, I don't have the emotional resources to say it now. I am wiped out. This week was so intense, watching the hearings, reliving past events, memories of things coming back that I haven't thought of in forever, many of which stir up anger and resentment even decades later. Some are minor and trivial, others were major and traumatic.

I am where I am. I have chosen to be where I am now. But when I am reminded of the events leading to the ways the course of my life has been altered by male privilege and entitlement and sexism, I go between feeling sick to my stomach and angry and disgusted. Things have not changed that much since the 1980s when I was in college as well. And white male entitlement has not changed much...though it is dying, it won't go out without a fight, as we saw on clear display this past Thursday in front of the entire country.

When I think of the things I experienced and witnessed throughout my life around male entitlement, both the traumatic experiences and the less traumatic but absolutely frustrating and enraging crap, having to endure the attitudes of entitlement, guessing at the rules because they never told you the rules, and constantly resisting and unlearning everything they tried to stuff into our heads about how girls and boys should be...

It's all been said so many times in so many places this week, I don't need to repeat it here. Privileged rich white boy finally runs into accountability- his good ole boy buddies in the Senate try to save him by paying lip service to "hearing" the accusations, but won't change a thing, digging their heels in, until drama ensues...and now we have to wait to see the results of the drama and see if the FBI investigation doesn't get micromanaged in ways that will continue to "protect" the public from the truth, and leading to the lifetime appointment of yet another alumnus of the school of beer-and-dick for brains.

What I am thankful for today are the many men in my life who are not Brett Kavanaughs or Orrin Hatches or Chuck Grassleys or Lindsey Grahams or Joe Kennedys or the other bloviating arrogant aging frat boys who think Kavanaugh deserves this promotion because of what he has between his legs regardless of what he did with it.

And I am thankful that I don't have children of my own who might become the prey of such horrible examples of humanity.

What does make me angry are the women who support this piggish display of male good ole frat boy culture. Makes me think those women are bitter and hurt. That they have never been kind to themselves. That they too have experienced this crap but buried it and did the pull yourself up by your bootstraps number...so they have unhealed wounds and attack other women. I don't know if that's true, but I just don't understand women who think sexual assault is something to take lightly. It makes me think these are the women who raise their boys and girls to be assholes and bullies.

As for Kavanaugh, what an arrogant little shit he was in high school and college, and still is. Not expressing compassion for his accuser in any way. Completely unconcerned with the fact that she is traumatized for life. His wife looks like an abused woman. He looks like an alcoholic, and acts like one in his denial. His juvenile answers to the committee, his lack of self-control in front of the committee and the entire country, who in the hell acts like that except for a spoiled preschooler?

And then there are the trivialities, random memories that came back this week, things that were said and done to me along the way that ranged on the spectrum from disrespectful to earthshattering. And there is a lot more, and worse, that I won't share here. And I won't even begin to talk about the crap I've endured while running. Yeah, #metoo.

The fog was therapeutic this morning as I could finally let go of some of the emotions- no one could see my tears or my clenched fists or vocalized rage. But it also made me think, this is how those POWDERs (pasty old white dudes explaining righteously) want us to be- in the fog, unable to see clearly. Keeping the truth from us. Well boys, the fog is burning off. Time's up. 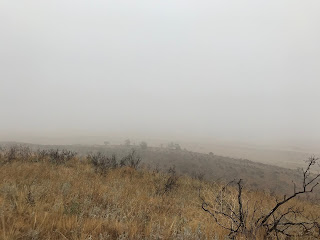