My first "ultra" in a year and a half.

On Labor Day weekend I usually try to escape Fort Collins or at least hide out. Not being one for crowds, this weekend is the annual Fat Tire Bike Fest in downtown Fort Collins, when New Belgium Brewery hosts this mass humanity event. People ride in costumes on fat tire bikes and then drink a lot of beer. Not that I have any objection to it, I'm just not into crowds, and I've seen the costumes so many years that I don't feel the need to repeat.

So instead of Fat Tire Bike, I chose Fat Ass Run. If you don't know what a Fat Ass run is, it's a term to describe a type of event popular with ultrarunners. Usually done as a social training run, a group of friends get together usually by word of mouth and agree on some kind of a course. The rules are: no entry fee, no t-shirt, no aid, no awards, no whining. Just a good old fashioned ultra without the circus, high prices, and extravagant swag.

Marissa DeMercurio put on this event for the first time a year and a half ago, on spring equinox. It was a success and I was thrilled when she said she would do it again this fall. It gave me a reason to train for something. I had no motivation otherwise. I haven't exactly "trained" but it was nice to have an answer when people would ask me what my next race is. I would tell them, "A Fat Ass Donut Run".

The DeMercurios are a running family, including Marissa's husband Pete Kardassis. Connie is one of my longtime running buddies up here in northern Colorado and Marissa is her daughter. Connie is beyond talented even though she never talks about it. She recently turned 60 and just a few months before her birthday she ran a 3:31 marathon. I can't even run one mile at that pace anymore.

Marissa is starting to get into ultras, has run a 50K and is now training for her first 50 miler. Her goal was to set a distance PR over her previous longest run which was 32 miles. Connie was out there being a cheerleader, training for her next marathon and putting "a few" miles in.

Marissa did provide some items for an aid station, she rented the pavilion at Lake Arbor park and set up quite a spread, including donuts, a staple of these runs. 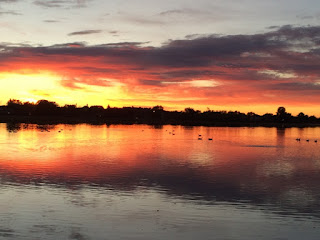 I drove down Saturday morning in light traffic, and arrived at the park before anyone else. I used the portapotty and got my table set up, along with my ghost peeps for decoration. The sunrise was intense vivid reds.

The plan for keeping track of your distance is to put one of these little stones that look like marbles in your jar each time you complete a lap. You're losing your marbles, or you're getting stoned, whichever way you want to look at it. Each lap is 1.15 miles. At the end of the day you can figure out how many marbles you lost or how stoned you are. 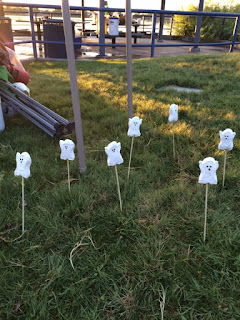 We started at 7 am sharp, with just me, Connie, and two of Marissa's coworkers, Rich and Dave. Everyone else planned to show up during the day and put in as many miles as they felt like running. Last time I ran this I got just over 50 miles and I set an ambitious goal of trying to reach that again. I knew it would be an effort given my low mileage and lack of fast walking practice.

It was cool and cloudy the first two hours around the lake and for the first half of the run I stayed on target for my 50 mile goal, but soon realized it wasn't going to happen. It wasn't so much the running, but the walking is what killed me. Usually I can rely on my fast walking pace in these events to get me through but I haven't been working on it. When I tried picking up my walking pace my muscles got tired and burned, and then my feet were subject to a lot of friction in my shoes from that type of motion.

I figured I could still get somewhere over 40 miles which was fine, I keep trying to push it as much as I could but I could feel the effects of every donut I've eaten over the past few months...

Sasquatch said he would be late arriving, he was planning on doing about 15 miles. He showed up at some point when I was halfway around the lake and for the longest time we could see each other but weren't making progress catching each other. Eventually Sasquatch waited for me at the pavilion and then we did about 5 miles together.

It was warm most of the afternoon, not sure how warm it got but the forecast was for a high of 87. Then the clouds moved in again and made the last couple of hours more pleasant. I never could get my electrolyte intake quite right. I took in lots of salt and S caps, but I got little side stitch-type cramps off and on. That never happens. Must be my lack of training, and lack of heat training. It was never bad enough to slow me down.

Running laps with Connie, Marissa, and Sasquatch was the best part, I love being able to hang out and catch up. In our busy lives we don't see each other often enough.

During the day there were quite a few people in the park. It was never crowded, but all day long a steady stream of people, with kids or dogs, would be on the path. I saw four Australian Shepherds, including one beautiful red tri at the end of the day.

By the end Marissa had 38 miles and Connie had over 36 miles and these were both distance PRs for these budding daughter and mom ultrarunners. Way to go! And Pete managed 35 or so miles. Keep in mind that they covered these distances while spending considerable amount of time holding down the fort and watching the aid station, making sure delirious runners got their stones in the jar and forcing us to eat donuts very much against our will. 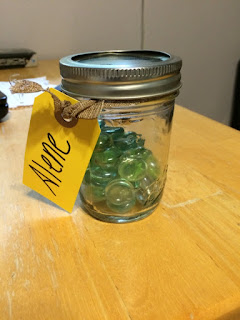 I managed to get 46 miles for the day, I stayed on my feet all day long, which was important to me. I was happy.

I want to thank Marissa DeMercurio and also Pete Kardassis and Connie DeMercurio for holding this event and going through the effort to make it happen. I feel somehow responsible for holding them hostage at the lake for over 12 hours of their lives. Actually 24 hours because this is second time they've done this.

When I got home Dennis had cooked a delicious meal of salmon and veggies and I ate, shared my videos with him, and then it was bedtime.

Today I have a wicked ultra hangover. My feet are blistered, my legs ache, I need to eat and drink. I'm dehydrated. We went for a walk to Starbucks this morning and the thought crossed my mind, "I need a goal to get me through the winter..."
Posted by Alene Gone Bad at 12:18 PM

Great blog of a very fun day! (All about the fun factor for me! 😀) Let's do it again sometime!!