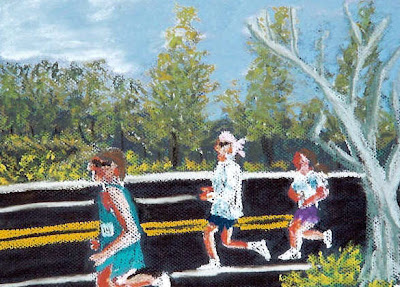 I ran two races over the past week. In the midst of feeling so bad lately, I have decided to make a goal run for the spring. I've all but decided on the Keys 100 in Florida in mid-May. November 1st is the beginning of training. Most years January 1st is the first day of spring for me when it comes to training. I needed a head start this year!

Sunday I ran the Tortoise & Hare 5K, a local Ft. Collins Running Club event, and felt horrible. The Tortoise & Hare running series is a handicap event, so everyone starts based on their predicted time, which results in everyone finishing close together. My predicted time for the series is based on what I was running 3 years ago. Not much comparison at all. This time I ran 27:26, which I think is my slowest time ever, for any 5K. As I dragged myself across the finish line, a good 2 minutes behind everyone else, I felt like for sure there is something wrong with me.

Monday through Wednesday I worked three days in a row, which I never do, and was completely exhausted by the third day, which turned into a 14 hour day, and had major brain fog and no energy for two days afterwards. I finally dragged myself out for a run with Cat Friday and we went slow.

Saturday morning I was signed up for the Heart Center of the Rockies half marathon, that finishes at Boyd Lake. I hoped it was a fluke that I ran so slow last Sunday and I felt like I should at least be able to manage that pace for a half marathon. I figured I could finish the half in less than 2 hours, and if I didn't, then I'd know for sure I am toast. Two years ago I ran it in 1:37. I didn't expect to be anywhere close to that time now.

I started the race with a co-worker who was running in his first race in many years. He used to run and compete in college and is about eight years younger than me. Last summer when he told me he wanted to sign up for the race I encouraged him to run it. He had been training well this fall until he hurt his foot and got the flu like so many other people. He hadn't run more than about 8 miles leading up to the race, and he was thinking around two hours for a finishing time.

He asked if I minded if he started with me, and I said sure, run with me as long as you like. I figured at some point he would get way ahead of me. We ran together the first 5 miles and I told him I was going to drop back because I needed to slow the pace down so I'd have something left in the last few miles. We started far back from the starting line, it took us 20 seconds to get to the actual start line, and two miles to get through the crowds of people so we could run with our normal strides.

He was running about 8 minute miles comfortably and I felt better at about 8:30 pace. I could see him ahead of me the whole time from 5 miles on, and he got quite a lead on me by about 9 miles. But then as we headed uphill after 9 miles, I could see I was gaining on him again and I passed him soon after 11 miles. I stuck with him for a short time, trying to encourage him to stay with me, but he was fading. Around 12 miles I took off ahead and ended up finishing a couple of minutes ahead of him.

I thought he did awesome, I'm not sure how he felt about his run but I was very impressed, considering he chose this as a first race. He could have picked something like a 5K. I know that if he had more training, I wouldn't be anywhere close to him. Great job, Eric!

I finished in 1:51. About 8:30 pace overall, but I felt better and ran faster the second half. Around 7 miles was when I felt myself starting to pick it up. And I ran the last 5K two minutes faster than last week's abysmal 5K, so that must have been a fluke.

It's good to have a baseline so you can measure your progress. A 1:51 half-marathon is my baseline. I have some work to do.

The Keys 100 will be hot and humid, and it's all asphalt, with little elevation gain and loss except for bridges. It goes from Key Largo to Key West. I'll have to prepare for the humidity by training in the steam room. Perfect for getting things primed for another run at Badwater the following year.
Posted by Alene Gone Bad at 8:30 AM 6 comments: