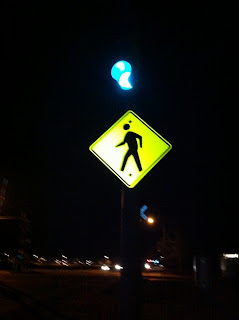 Just a quick post before I go to bed, I have to work in the morning and it's getting close to midnight.

Tonight was the night to view the Geminid meteor showers if you have a clear sky, and Wheaties Boy threw a semi-organized event together at the last minute in honor of it. He's spending the entire night running up and down the Magnolia Road, for 12 hours.

I wanted to join him but I picked up an extra shift at work a while back, and it looks like I will have to go in. I decided to do a run, but there was no time to go to Boulder.

The other exciting thing that happened tonight I had a meeting from 5 to 7 pm, the Survivorship Advisory Committee met for our last meeting of the year, and that is the steering committee for the Cancer Center. Tonight we found out the date of groundbreaking for the Cancer Center, the project for which I was fundraising during my Badwater and other runs. It is set for January 17th.

I am so excited to see this actually happening. I've played a very, very small role in it, but it's been important to me and at our meeting tonight we were all really proud to see the work that so many people have put in, remembering the difficulty, sometimes torture, that so many have endured, and continue to go through...cancer is not going away anytime soon, and this is a much needed addition to our community. So yes, I am proud of it. And very excited to be part of the groundbreaking. 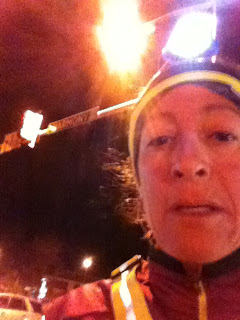 After the meeting, I went home and changed into my running clothes, and got out the door before 8 pm. I ran south of town toward Loveland on my secret route, where the lights are not too bright, so I could see the sky. At first it looked like it would be too cloudy to see anything, but once I got about 3 miles from home, south of Harmony Road, I saw the first meteor shower in the west. I cranked up the trance tunes and that made it perfect.

The sky is too bright in some areas on the south end of town because there has been so much development, and this time of year everyone has Christmas lights. I wish we could have had everyone turn off their Christmas lights for the night, because it would have helped the view a lot. That was one nice thing about living in Fountain Hills, there was an ordinance that kept the lights down and it made the night sky awesome. 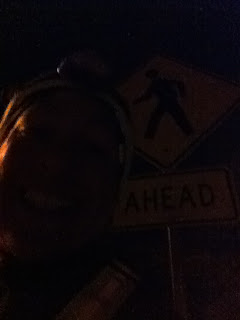 But I still got to see quite a few meteor showers in the west and north. I got home around 11 pm, I got a little over 16 miles in, and it wasn't too cold out, but my face was starting to freeze.

I texted Wheaties Boy (aka Meteor Boy) several times during my run, hoping he'll get some of my messages if he gets service out there, and if his phone battery holds up. He'll be out there all night.

Not a bad way to get some miles in. Hopefully work won't wipe me out tomorrow, it's a big weekend of running. I only have 44 more miles to do and I'll have my 100 for the week.

The idea of running back and forth all night inspires me.