Who Is Alene Gone Bad? 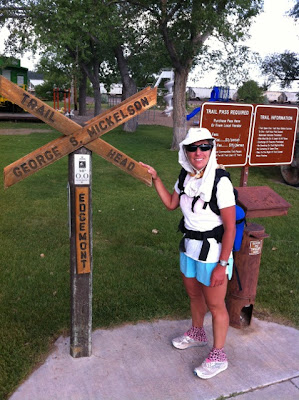 I was born in Philadelphia, PA in 1964. I lived in the suburbs of Philadelphia throughout my childhood. My mother put me in kindergarten at age 4. She said I drove her crazy. I attended both public and Quaker schools. My parents divorced when I was 12, my dad remarried, and I moved to Scottsdale, Arizona with him and my stepmom when I was 14. I graduated from high school at 16, from college at 19 with a Bachelor's degree in Forestry. I took a 6 year break from school to get off the fast track, and then started a Ph.D. program.

I studied exercise science and natural resource recreation in my doctoral program, which gave me a broad academic background in both physiology and the behavioral sciences. My research focused on the psychophysiological benefits of recreation in restorative outdoor settings. After that I taught college exercise science, wellness, and kinesiology courses for two years. I loved teaching in the classroom but found the academic world to be oppressive. It was like being on a treadmill with no "off" button.

I have the following degrees: Bachelor of Science in Forestry from Northern Arizona University, 1983, Doctor of Philosophy in Recreation Resources from Colorado State University, 1994, and Associate of Applied Science in Nursing from Scottsdale Community College, 2006.

-Education is too important to be left to the educators.  Francis Keppel

I met my husband Dennis at a race in Gunnison, Colorado in 1986. I moved to Fort Collins in 1989 to start graduate school while he was in Alamosa training under Coach Joe Vigil, and we got married in 1990. Other than 2 years in Gunnison and 8 years in Fountain Hills, Arizona, Dennis and I have lived in Fort Collins since then. I think of Fort Collins as home.

We lived in Arizona from 1998 to 2006 and during that time I had my own business as a certified personal trainer. I worked exclusively with women ages 40-80 who had specific exercise needs due to chronic health conditions, such as osteoporosis, arthritis, cardiovascular disease, chronic pain, and autoimmune conditions. Many of these women had tried working out at gyms with trainers who didn't know how to tailor their fitness programs according to their individual needs and ended up doing more harm than good. As I found myself learning more about their health conditions, their medications and treatments, and their lifestyles, I became interested in nursing. I went back to school for nursing in 2005.

For nearly four years I worked in a hospital intensive care unit, which I found to be all at once interesting, challenging, exciting, and exhausting. In mid-2010 I started working in an outpatient oncology/infusion clinic in the same hospital. The change was good, a whole new world of nursing and interacting with patients who are independent.

Nursing is a profession full of contradictions. It's physically, emotionally, and mentally challenging, it's self-sacrificing, kind and humane, while at the same time it can be harsh and unforgiving, particularly within the profession. Nurses are good at advocating for their patients, but not at advocating for themselves.

I truly believe that if nurses took better care of themselves and each other, the profession would benefit as a whole. Bedside nursing is poorly compensated for the level of skill, knowledge, energy, and patience required, while the rewards are both omnipresent and elusive.

The beauty of nursing is that it can present a number of opportunities to help people in various aspects of their lives and to be somewhat creative in the approach to care. The downsides include a lack of respect, having too much responsibility without the professional status and compensation, and being expected to perform superhuman mental and physical multitasking for extended periods of time, which leads to fatigue, burnout, and health problems.

-I am only one, but still I am one. I cannot do everything, but still I can do something. I will not refuse to do the something I can do.  Helen Keller

I enjoy the following activities: road cycling, mountain biking, writing haiku, writing in general, painting in pastels. Over the 30 years before I became a registered nurse I have done the following jobs: fast food worker, pasta maker, waitress, grocery store clerk, baker, prep cook, library worker, forester, researcher, cross country & track coach, college professor, personal trainer, and a few more I can't remember, or don't care to. My favorite jobs have been the ones where I made the least money. I would say other than the crazy hours and low pay, baker and pasta maker rank up there pretty high as the most enjoyable, low stress jobs.

-Every individual has a place to fill in the world and is important in some respect whether he chooses to be or not.   Nathaniel Hawthorne

My social-political learning is liberal/left and I tend to vote Democratic but not always.

-New opinions are always suspected, and usually opposed, without any other reason but because they are not already common.   John Locke

My religious leaning is nothing, I adhere to no organized religion. I believe in a personal spiritual higher power but I don't give it a name or gender. I think my spiritual direction comes from within myself and I am guided by an inner light, an inner compass, something I believe is in everyone. My exposure to organized religion has consisted of negligible amounts of Judaism and Christianity, and a small amount of Quakerism. As an adult I identify most with Quaker spirituality but I do not consider myself a Quaker.

-Joy is the most infallible sign of the presence of God.   Leon Bloy

equality  I don't think people should be treated specially or differently because of their status or rank in any tier of society or institution or group affiliation. I think with status goes privilege, and with privilege comes responsibility to others. I think people who have gifts or material resources need to share them with others in a way that helps others make the best of themselves, wherever they are in their lives.

-Treat people as if they were what they ought to be and you help them to become what they are capable of being.   J.W. von Goethe

integrity  I believe in making the most of every day, that every day is an adventure, and getting the most out of everything I do, living with a purpose. I believe in challenging myself in some way every day. Don't agree to do something unless you intend to do the best you can, to the best of your ability. Otherwise get out of the way of others who want to follow through on what they set out to accomplish. Always be yourself, and be true to yourself.

-The important thing is not to stop questioning.   Albert Einstein

peace   I tend to like people who are warm, fuzzy and kind. Flaky people drive me crazy. I don't like it when people are contemptuous, exclude others, form cliques, and are intentionally hurtful toward others. We're all human and we all belong here. I don't mind people with BIG attitude as long as they don't use it to hurt other people on purpose. Making eye contact, smiling, and acknowledging the presence of other people is a good start to making peace.

-While you are proclaiming peace with your lips, be careful to have it even more fully in your heart.   St. Francis of Assisi

simplicity   Material things are not important, people are, and so is the beauty of the world we live in.  Wean yourself off your cell phone and your TV. Pay attention to your surroundings, the breeze blowing through the trees, the angle of the light shining from the sky in different seasons, the presence of other people around you, the elements of your immediate environment. When did conversing on the phone become so all important that people can't bear to turn their phone off? Why is silence and being by yourself in the company of your own thoughts a rare event? We didn't have cell phones just a few decades ago and humans have survived for hundreds of thousands of years without them. Be present and within yourself, not ruled by your possessions. Those things only take us further away from who we truly are.

-If we have no peace, it is because we have forgotten that we belong to each other.   Mother Teresa

art   I have been painting in pastel since 2001 and I paint landscapes inspired by southwestern U.S. scenery. In the past I have sold my work in galleries and art shows, and I intend to do more of that in the future. I have recently started a website but am not selling from it yet.

writing   I have done occasional freelance writing for the past 15 years, I like the blog format and prefer it to writing articles the old fashioned way. I find the blog format allows for more creativity. I have five blogs and four are public, Journey to Badwater , Bitchen Swill , Ultrahypo and Alenepastels. My other blog is written under a pseudonym. I like to write haiku for fun. I like spoken word poetry (recently) and I have written some poetry that I am too embarrassed to show anyone because I think it is terrible. In May, 2011 I started writing in a monthly running column in our local newspaper, the Coloradoan, and in December 2011 I started blogging weekly for the Oncology Nursing Society, a professional organization of Oncology nurses.

running achievements   I have been running since 1984 and doing ultras since 1991. I don't keep track of how many races I've done. I've run well over 100 races of at least marathon length. I don't care where I place in races anymore but since people ask here are my lifetime PRs. The fast ones are old, the longer ones are more recent.

I find myself running longer distances because for me, running is becoming as much of a self-renewing, creative, and spiritual activity as it is physical.

-Compared to what we ought to be, we are only half awake. We are making use of only a small part of our physical and mental resources.   William James


Least known fact about me: I own a pogo stick and I'm damn good at it!

-Lack of something to feel important about is almost the greatest tragedy a man can have.   Arthur E. Morgan