That's the song that was in my head when I woke up this morning. For some weird reason. And then I realized it was the manifestation of all the insanity that's happening in Washington DC. If you don't know the lyrics, check this out:


Just thought I'd share that for fun! Could be the theme song for POTUS Number 45.

I haven't posted because life has simply been too busy, between trying to write a little for the book but having fifty gazillion distractions over the past few weeks. Now I am excited to get back into a routine. 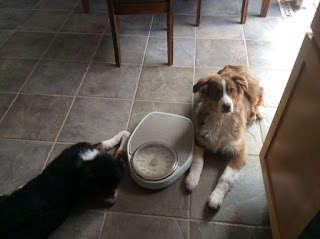 I got on the scale and exceeded my previous highest weight ever, so now I can say I do have 20 pounds to lose and I have set a goal of the end of the year, I think two pounds a month is reasonable. I'm not going to restrict myself very much, just pay better attention to eating smaller portions, trying not to stress eat and drink, which I realized has been a problem for me since about November (hmm...)

Running-wise I have been fairly consistent getting the miles on my feet. I want to build up to where I feel comfortable with signing up for at least the 24 hour at Across the Years. I'd like to do the 48 hour but I'll have to see how this year unfolds. I'm thinking about the six-day race in a few years, maybe for my 55th birthday goal.

Speaking of birthdays, I'm having a Donut Triangle Run next weekend. It's about 53 km but probably a little more than that. I have decided that if the weather sucks, I'm not doing it. I have nothing to prove, and I don't feel like being miserable. 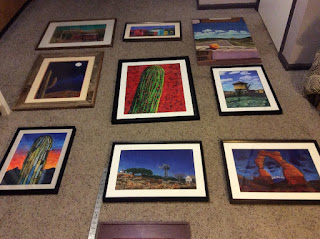 I held a workshop 2 weeks ago that went well, I might do some other ones occasionally on different topics. I have an art show/display coming up, I'll have my work at Elevation 5003 Distillery here in Fort Collins during the month of March. 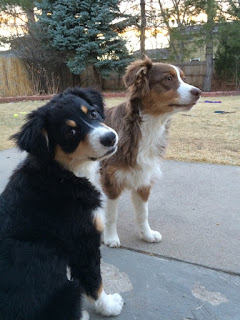 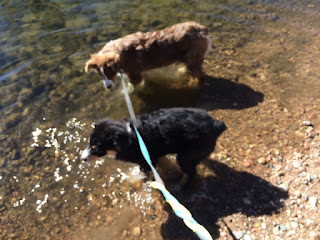 The girls continue to grow. Velcro now has most of her adult teeth and Gypsy is starting to get hers. Gypsy still looks little to me but se has grown, a lot. She just looks small compared to Velcro. We've been hiking, and the weather's been so warm we've been dipping our toes in the Poudre River. The girls love the water. 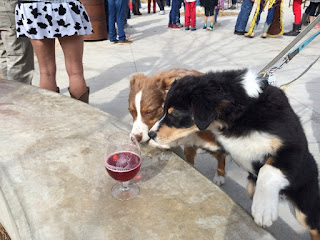 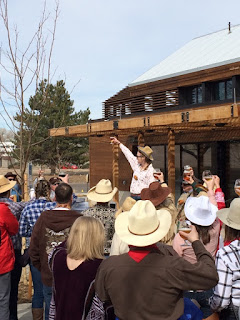 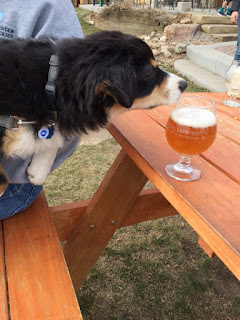 Last weekend was the Human Powered Brewery Tour, which we attended with the girls. We only went to New Belgium and Odell, neither of us had the energy. The girls did well. Other than trying to steal our beer, they enjoyed seeing all the people and the other dogs. Gypsy barked a lot, she is learning to make her voice heard. We start obedience training next week. I can't wait. 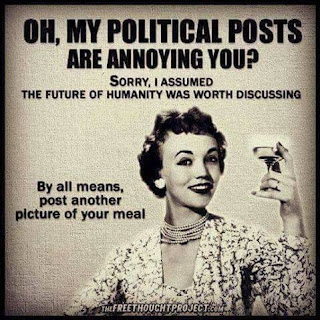 I was talking with a friend the other day and we shared our coping mechanisms since the Trumpocalypse started. I think we are getting a little better handle on living with the uncertainty and insanity, though it's still stressful because every day you wake up not knowing what else he has in store for you. 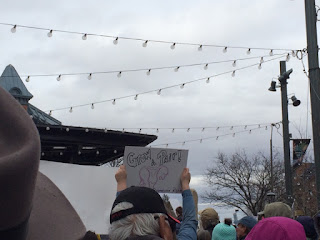 I've been calling my pathetic excuse for a Senator Cory Gardner who is afraid to meet with the public. These buffoons are so scared now, they know they have pissed off their constituents and the ones who have held public meetings run away and escape through the back door. They make excuses and say things like there are paid protesters. I wish I could get paid for this! 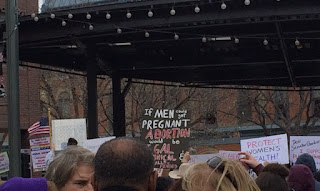 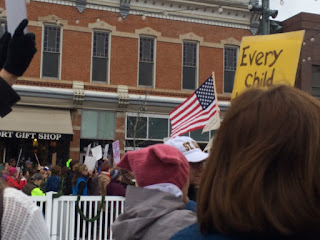 They think they are entitled to their positions as elected officials but they need to remember they work for ALL of us, not just Republicans. I have been calling for nearly a month and only twice I have spoken to an actual staffer. I get tired of leaving voicemails, but I continue to do it. 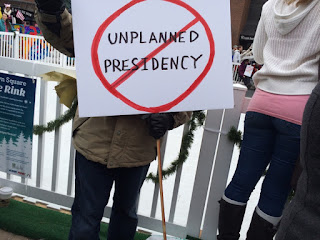 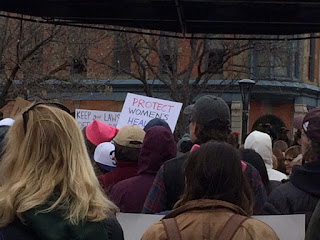 I went to the Planned Parenthood rally in Old Town a couple of weeks ago and there was a great turnout. If Obama was so bad, why weren't people marching in the streets and calling their elected officials and demanding public accountability then? This has taken the lazy, self-interested politicians by surprise. They were so comfortable in their jobs and not having to deal with a crush of phone calls and angry protesters all the time.

I have a call with my mentor/publisher this morning and I'm really excited about my progress despite the distractions. I'm looking forward to getting back into a routine.

Oh, and did I mention? Spring is here. Crocuses are blooming, little green leaves are opening up on the bushes, and this morning it's raining. February at 5000 feet and 40N latitude. Just a little early.

Back to work. I want to post more, and that might happen now that I can focus on writing. See you again soon. Thanks for reading!
Posted by Alene Gone Bad at 8:37 AM No comments: 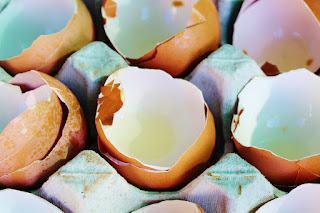 Just 12 days into the #45 Presidency, every day has brought a new wave of dread, anxiety, disgust, and sadness.

I find it hard to focus on whatever I'm doing. It's an unsettled feeling, like the ground is moving underneath me, and I'm not sure when the other shoe will drop.

I'm trying to keep it together, not get enraged, and breathe. Some days are better than others in that regard. Yesterday was a particularly difficult day, and I went out hoping to get a run in, but I was tired. So I walked. Twelve plus miles, hoping the rhythm would clear my head.

I came home and tried to focus on preparing dinner, playing with the girls, and checked Facebook. Big mistake.

I use social media for a lot of socializing, and some work-related stuff. But I've lately allowed myself to be sucked into some discussions where there is a combination of intelligent discussion, ideas for taking action, and venting. And then there are the occasional people I haven't heard from in a while.

I try not to vent political stuff on Facebook but when it comes to nursing and issues around that, I do. It's a way I've been able tor each out to some of my fellow nurses who are still in the corporate world and living with fear for their jobs.

The other night an acquaintance of mine posted something about his frustration with the Trumpocracy and his anger with the people who are defending him and looking the other way as he issues one legal atrocity after another. The way he wrote the post hit home so well for me, that I read the few comments posted on there. One comment set me off. It was someone who first of all used very poor grammar and sentence structure, claimed to be a veteran, and was using personal attacks against the person who posted.

I lost it. I wrote back and told him I don't care if he's a veteran, that doesn't give him a special right to come back and attack citizens who disagree with him. I always resent when people use their veteran status to attack other people when justifying their political views. Didn't veterans defend this country so we can have free speech, freedom of religion, and all the other freedoms that now are at risk under the current escalating coup? People don't seem to be able to understand how to attack an idea without attacking the person.

The guy wrote back of course, attacking me, as I expected him to, but I didn't engage him any further. I am just so tired of the weak and irrational excuses people are making to justify their oppressive political stances.

It was a pathetic waste of my time and energy, but it did feel good, so maybe it was therapeutic.

Still, there are so many people in this country who support this regime who aren't seeing what's happening. And feel misunderstood, dismissed, disenfranchised, think that it will somehow help them. The Democratic party has failed miserably in their attempts to gain the people's trust. And the Republicans have no conscience, it seems, though just a few are speaking up. I can't believe that there aren't more Republicans who will fight this attack on our Constitution.

We need unity to fight this, and all the distractions and lies being thrown our way are just that. Distractions and lies meant to throw us off and take us away from what we really need to do, which is fight back with everything we've got. I've been writing my GOP senator, Cory Gardner. Fortunately the other Senator is good, and we've got a good Congressman who are fighting for the people.

But it remains, as a poster child for narcissistic personality disorder and sociopathy, Trump truly is unfit to be President of anything except his own personal business dealings, which I hope he returns to 100% so we can get on with the business of running a country in a humane and civilized way.

Posted by Alene Gone Bad at 9:39 AM No comments: