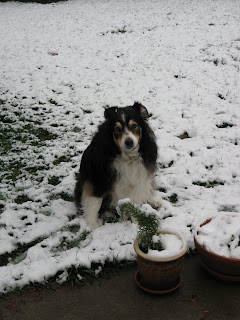 In Fort Collins, it's 36 degrees and dumping this stuff. All my flowers and early herbs I planted are watered now. I didn't have to drag the hose out. I will have to motivate myself to get out in the slop today. I can do anything for two hours.

It's beautiful but when will it ever be spring? I'm off to the sauna again this week, once a week until June. 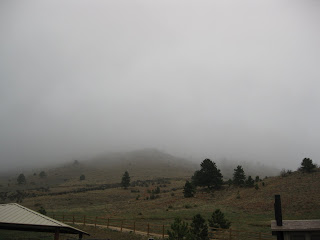 I ran with Katy and Kira on Saturday and we did Rock Repeats, in the fog and snow. It looked like this at the trailhead when we started, and there was white stuff coming down from the sky at the top. 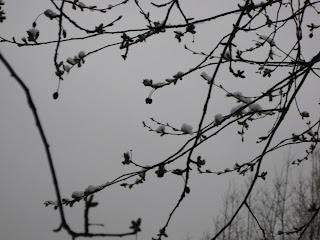 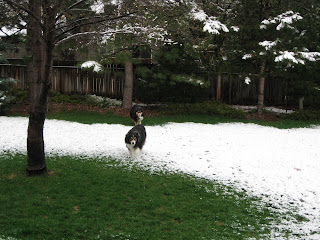 Buffaloes coming back from another squirrel chase. If the Buffaloes can motivate themselves, I have no excuses... 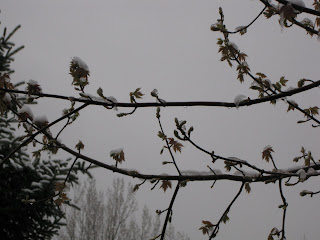 Email ThisBlogThis!Share to TwitterShare to FacebookShare to Pinterest
Labels: Buffaloes 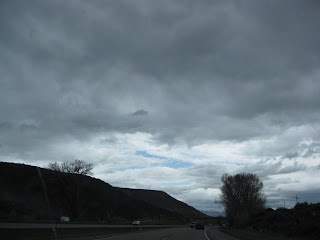 This weekend we went to Fruita to visit our friends Kirk & Keith (aka Horace and Towanda), and I was signed up to run the Spring Desert 25 mile race. Towanda was also running the 25, and Horace was running the 50.

Driving from Fort Collins Friday morning, we left early knowing I-70 could get bad. The visibility was horrible from just outside of Golden to the top of Eisenhower tunnel. It took 2 hours to get from Idaho Springs to Vail, which is only 60 miles. Once we went down the other side from Eisenhower the roads were fine, even on Vail Pass. They must have closed I-70 soon after we got over Eisenhower because we heard there were a ton of people who were supposed to show up including some of the race staff and volunteers who were stuck in Denver. 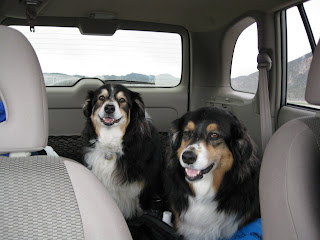 It was a long drive but the Buffaloes needed a weekend out of town and they wanted to see their friends Boy and Bella, who own Kirk and Keith. By the time we got out of Glenwood Canyon and could see the cliffs above Grand Junction, there was one blue hole in the sky. Promising.


We saw Nick at the pre-race packet pickup in Fruita, and we introduced him to Kirk & Keith. They invited Nick to stay at the house. Nick had planned on camping out near the start. The weather wasn't great for camping, it looked like anything could happen over night with the thick dark clouds everywhere. 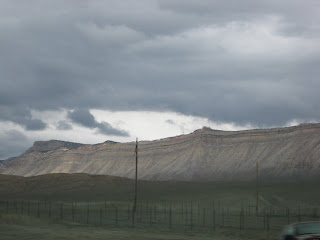 Maybe I should re-title this post, "I am an idiot". Before the race that morning I was thinking I'd be able to run the 25 in less than 5 hours and the sky looked dark and cloudy, even with the small amount of light there were not too many breaks in the clouds. I didn't want to carry the camera if it was raining and I thought, I won't want the weight in my pack.

Going up Moore Fun, the first part of the trail, the sunrise was outrageous, shades of blue and orange peeking through the edges of the dark clouds above the cliffs south of the river. I got to the first aid station only 3 minutes faster than last year when I ran the 50, and at that moment I was furious with myself for not bringing the damn camera!

And then on the second section of the course the juniper-dotted cliffs and mesas were lit up and the usual incredible views over the river were as incredible as ever. The day turned out to be perfect, the sky cleared out for the whole morning, and we stayed dry. Next year I will bring the camera, no matter what, no excuses.

I actually ran pretty fast on the trail in the whole middle section of the course, from about 6 to 19 miles. I powered up the steep long climb above Mack and when I got to the top, that was where I saw Nick in third place headed back on his second loop, and it was soon after that, my legs said, "We're done!". I was careful not to bite the trail in the rocky sections on the way down. I guess I was delusional, thinking I could finish faster this year when I haven't done anything remotely like speed training yet this year. 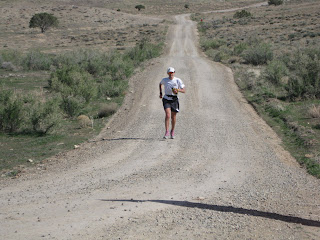 We waited around in the cold wind for Kirk to finish, it was blowing and getting dark again, like there was more rain waiting to dump out of the sky. 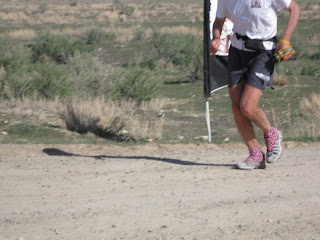 Kirk wore his pink gaiters, which did brighten things considerably.


Iris & Isabelle had fun playing with Boy and Bella. 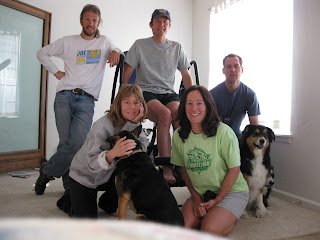 After the race all of us went out for pizza and beer with two of Kirk & Keith's friends from Crested Butte. The pizza was amazingly good for being in Fruita, which as far as I can tell, is an evolving, formerly extreme redneck town that has given up resistance to a huge influx of yuppie visitors with SUVs, mountain bikes, and disposable income.

On the way home the road was clear the whole way. Looked like about a foot or more of snow in the foothills and some in Denver, but Fort Collins looked like it didn't get much. Maybe it rained here.

I am not at all looking forward to the Colorado Marathon in two weeks. I am hoping I am just tired from my tough 2 weeks of rock repeats and being in my usual state of exhaustion from work. I'll take it easy this week and see how I feel. But I doubt I will want to get up at 3 am and catch a bus up Poudre Canyon, plus get nauseated from fumes, just to run downhill on pavement for what is looking like at least 4 hours. I'd rather sleep in and do a long trail run. 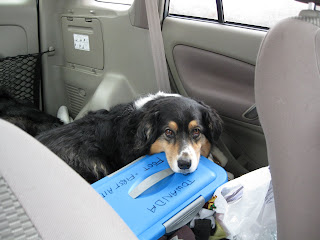 Maybe I'll hit the sauna this week and get myself in Death Valley mode.
Posted by Alene Gone Bad at 4:08 PM 2 comments:

Is It Spring Yet? 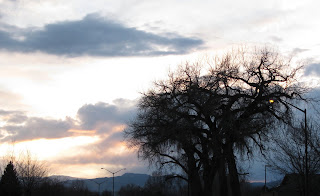 It was a good running weekend! Saturday morning I met Katy and her dog Kira at the Horsetooth Mountain trailhead and we did four Rock Repeats. After four hours we were done, got our 20 miles of vertical running and still had energy to spare. It was cool and windy but no mud and no snow except for a few snowbanks off the side of the service road that Kira used to cool off.

Katy and I get all of our weekly frustrations out in the first 5 miles of our run, and after that it progresses to a giggle-fest. After a couple of hours everything is amusing, and by the end it's hilarious. I didn't bring my camera this time and I missed the picture of Kira lying in the snowbank with snow piled on her head. Katy gave me so much grief about my big heavy butt pack last time that I thought I'd go lightweight. 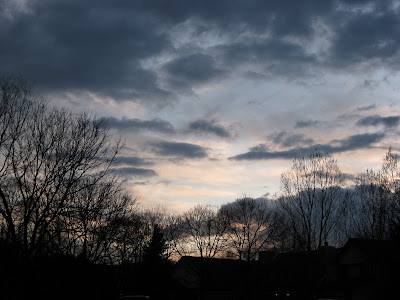 Sunday morning was cool and there was a light rain when I started my 15 road miles. I ran the Spring Creek trail out to Cottonwood Glen park and then took the road north to the trail behind the stadium, turned around at 7 1/2 miles for a 15 mile out & back. It was raining fairly hard once I got to the stadium but tapered off as I ran east. I felt strong but slow. My legs were a little sore from running rock repeats twice last week, but I needed it.

I got two weeks in a row with mileage over 50 a week. I'm where I should be if I'm going to run Lean Horse. Not bad, 35 miles this weekend, some good climbing and descent, some road miles, no snow or mud, and when we did get weather, it rained! Must be getting closer to spring. The leaves aren't out yet on the trees, but getting close.

I don't have very high expectations for the upcoming Colorado Marathon. I was slow as a snail last year, and this year isn't looking promising, but that's okay. I'm still wondering why I signed up for it this year. It's more of a social local run than anything, I guess. It's a scenic course, but the thought of 26 miles downhill on pavement along with getting up at 3 am to catch the bus up Poudre Canyon is not my ideal race. I like a late start, time to sleep in and eat breakfast, and something that lasts longer. Like a few days longer.

Next weekend is Fruita, the 25 miler. I am hoping I can stay up with Keith for part of the run. She's blazing fast and I need a good workout. We'll see how long I can hang on. I need to bring my camera for the section above the river, though, so I'll be carrying some weight on my butt. I'm well-trained for that!
Posted by Alene Gone Bad at 3:03 PM 1 comment: 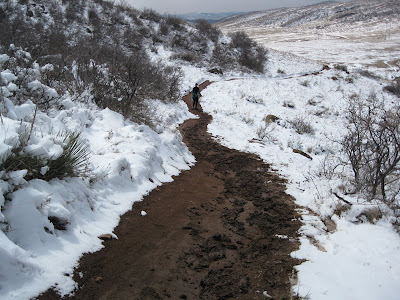 We didn't get enough miles in, but we did get out and do this for four hours today! 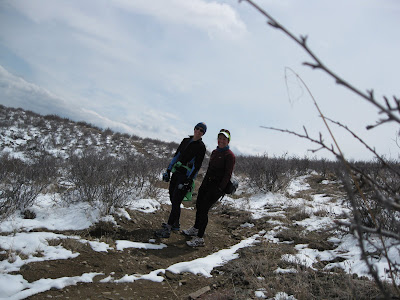 The whole way we felt like we were sliding off the trail. 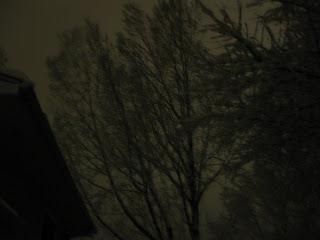 The other day I woke up to this. Welcome to April in Colorado. It doesn't snow all winter and then at the end of March it dumps. 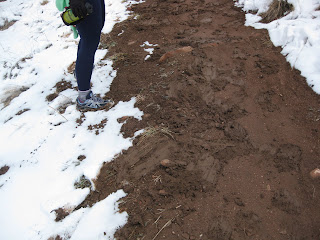 Trying to get geared up for racing season in this stuff is a challenge. Katy went up to Dillon and skied all day Saturday. The roads were bad, and last night we talked about changing our plans to something really boring, like pavement. But this morning the sky looked clear and it was supposed to stay cold. Good trail conditions, at least the mud wouldn't be an issue. Right?

Four hours of shoe-sucking mud, slush and snowdrifts later, we had our workout in and the hills were socked in and snow was coming down in time for Katy's drive home. It didn't look so bad to the north, but it was blowing in from the west and the wind picked up. 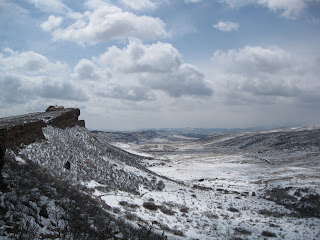 The views from the Blue Sky Trail and the Indian Summer loop were worth the slopfest. 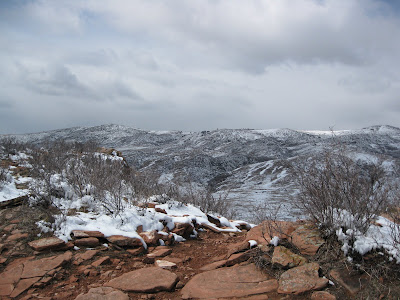 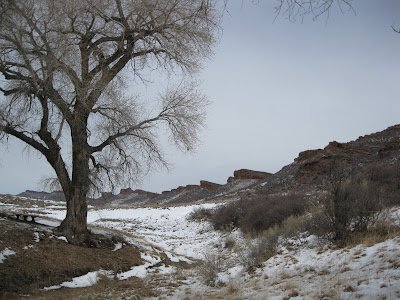 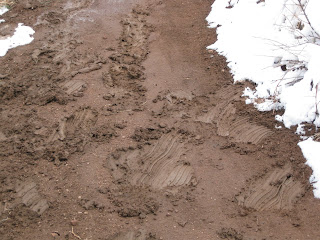