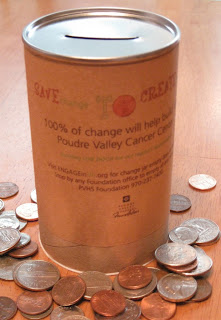 It's December 20th and today is the day the PVHS Foundation launches the Save Change to Create Change campaign to raise money for building the Poudre Valley Cancer Center.

December 20th is also a special day for me. It's my dad's birthday. I want to thank him for being a great example of generosity, positive energy, focus, and drive. He is the most highly self-motivated person I've ever known and I'm sure I get my ability to run ultras from him.

It's the day before solstice, and there's only one day to go until the days start getting longer. For now, it's dark outside most of the time, and it's a good time for contemplation and review of the past year, and for thinking about hopes and dreams for the coming year.

As I'm preparing to run around the track at the end of each year, I'm reflecting on a list of meditations for my Across the Years race. What have I learned this year? How can I be better next year?

Looking back, I learned a lot this year. I suffered some pain, but I also grew from the experiences. Things came into sharper focus as a result. I learned that I should have trusted my gut a lot more than I did, and spoken louder than I did. I left myself vulnerable, but I'm glad I did in a way because in that vulnerability I learned the lessons I needed to learn.

And as a result of the actions I took from those lessons, I am in a much better place now in so many aspects of my life. I know I can be better next year, and make more of a positive impact.

Make your new years resolution count in 2011 by making a positive impact. 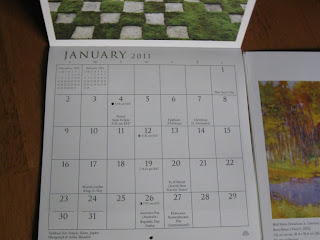 What better gift could you give? If you have influenced someone else in a positive way, then you have made a positive impact. A thousand small acts, like pennies, all add up to something big.

Guided by some basic values, we can influence others in good ways. The principles of integrity, equality, community, simplicity, and peace are the ones I like to start with. They are building blocks, as well as things in which to strive for improvement. Here is what this means to me:

To the greatest degree that you can, practice

integrity: be true to who you are and genuine in all your interactions with others

equality: no one person is better than another, we are all of equal value as human beings, and each of us brings a unique presence and gift to this world, the actions we each take will make our mark on the world and other people's lives

community: remember that everyone is a part of a community, or several, which are all connected

simplicity: less is more, take only what you need and share with others who have less

peace: be aware of your presence in the world and how it impacts others, be kind, be quiet, and listen first, think before speaking, but speak out loud when it makes a difference

At Across the Years, as we circle the track around Nardini Manor, we will all be united in the event and sharing a common goal, to cover as many miles as possible in the time we have chosen to run, 24, 48, or 72 hours. I can't think of a sporting event that better exemplifies these principles.

My goal at Across the Years
is to run at least 150 miles. If enough people donated a penny per mile, it could add up quickly. My running partner said she'd give a quarter a mile. I've been dumping my loose change into an old coffee can and I'll donate that.

I challenge everyone reading this to make a New Years resolution of generosity, making a big impact through something small, by contributing some loose change to the PVH Foundation Cancer Building Fund, to build something that will bring wellness to this community. Small steps, small things that add up and make a big difference.

My favorite suggestion for donations: Consider donating an extra dollar per each mile I go over my goal.

The following part of this blogpost is a modified version of an earlier post I wrote on September 25, 2010:

Some simple guidelines for the coming year: Be Kind, Be Well, Be Generous.

Remember the power of a small thoughtful act, like a thank you, a word of appreciation, even something as small as a smile, eye contact, or acknowledging someone else's presence. Small things make a big impact.

Make an effort every day to acknowledge people, thank them for the things they do, make eye contact and smile when it's genuine and appropriate.

"I am only one, but still I am one. I cannot do everything, but still I can do something...I will not refuse to do the something I can do"- Helen Keller

When I talk about wellness, everyone thinks I mean running. Any exercise is a huge part of my own wellness. It's important to move your body, to keep the blood circulating, to bring oxygen and fresh nutrients to your muscles and organs. For me, moving forward boosts my creativity. I put in as many miles walking as I do running.

If I'm struggling with a problem, and I go for a run, even if I don't actively or consciously think about the problem while I'm running, I usually end up solving it after the run, or at least I have a better approach. The same thing happens if I go for a walk.

There is something about the forward, rhythmic motion of moving through the air, arms and legs pumping, that turns the wheels in my head and gets it all going. I find it hard to think when I'm sitting still. I challenge everyone to find ways to add self-propelled forward motion. For example, walking to the little grocery store in my neighborhood instead of driving to the big supermarket. It takes less time to make the round-trip on foot, I timed it.

There are so many ways to make changes in our lives, but to make change last, you have to start small. Take small steps, and achieve success with those, before taking bigger steps. It's a process, but even if you make one small change in the direction of wellness next year, it's a success.

Success builds on success and you will learn that it is possible to make lasting, positive changes. Then it becomes easier to take the next step.

A penny by itself is only a cent. One hundred fifty pennies is a dollar fifty. If a thousand people give a dollar fifty, that makes $1500. Loose change can do a lot. 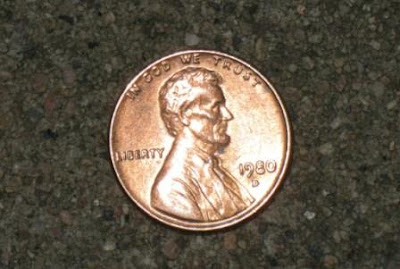 Save change to create change, and start moving forward now!
Posted by Alene Gone Bad at 4:54 AM 2 comments: 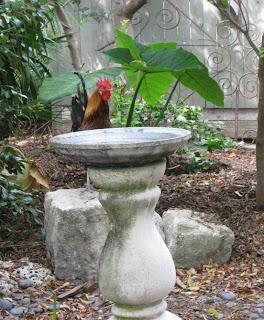 Not sure what this rooster is thinking. Is he about to take a bath? Is he looking for a drink? Maybe he's tapping his feet impatiently, waiting for something big to happen. Like tapering for a race.

The past two weeks I've been trying to balance rest and running. I've gotten a lot of sleep, done some errands to prepare for my trip, tied up some loose ends for projects I needed to complete, and here I am. Trying to be patient.

It's been cold the past few days, we were all spoiled here in northern Colorado by the mild fall weather. Temperatures were near 70 until just a few days ago.

Monday I'll have a new blogpost up, it's the day we launch a campaign to raise funds for the Poudre Valley Cancer Center. There will also be information about how to send messages during Across the Years. I love getting those messages during the race, they motivate me more than anything else, in the middle of the night when I'm trying to push myself through the fatigue.

I had a dream the other night that I was running a 100 mile race and I decided to take a nap in a hotel room. When I woke up I had slept 8 hours and I only had 3 hours left on the time limit to finish, and 20 miles to go. Not good! I'm taking that as a reminder of being careful about my nap time at Across the Years. In 2008-09 I slept for a good portion of the event. Actually slept better than I had in months. But that year I needed it!

I want to wish everyone reading this blog a happy holiday and a healthy and happy 2011. Thanks for your readership. I have some new topics planned for early 2011 in addition to my preparation for upcoming events.

Stop back soon!
Posted by Alene Gone Bad at 7:29 PM No comments: