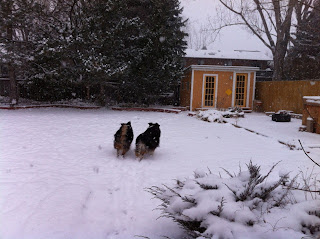 I woke up this morning and the world was still here. It's solstice, and I'm going to enjoy these 10 days of winter. We finally got some snow, just enough to last until spring, which starts after next week, January 1st.

I've been enjoying running in the darkness, we've had some beautiful sunsets lately. I didn't run on my work days, so that gave me three days off of running. 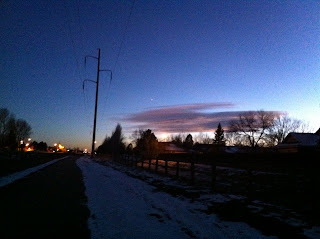 Work has been a zoo and I had a wicked work hangover yesterday after doing three closing shifts in a row, two of which were 12 hours, with long chemos and a couple of patients who needed one-on-one nursing attention.

And Dennis was sick for two days, home with some bug that gave him a fever and some nausea, but no major puke fests or anything. He's better now. He's one of those people who won't call in sick to work unless he's dead, so it took some convincing to get him to stay home.

Yesterday was my work hangover recovery day, which means I am pretty much non-functional until after I get my nap. I took the girls out for a run in the morning and got 5 miles in, it was 3 degrees when I woke up, and I waited until it was up to 17 degrees before I stepped out the door. It warmed up nicely to the mid-30s by afternoon.

I was feeling extremely crabby, though. I've been feeling that way this week. I had an appointment to get my hair cut and Colleen, the woman who always cuts my hair, was telling me about her mother, who is going through a lot of the hormonal changes that go with menopause. We were laughing about it, and then one of the other women who works there was walking a little old lady using a walker back to wash her hair before she cut it. I said to Colleen, that will be us in another 40 years.

I desperately needed my nap, and I slept for 2 1/2 hours before going out to finish up for 10 miles for the day.

After my run, I called my dad, because it was his 71st birthday. When I called, he was just finishing up his workout with his personal trainer. He's feeling good these days and has a lot more energy than he has in a while. He's been allowing himself to get more sleep, and thinks that's the reason he feels better. I would have to agree.

I'm a chip off the old block. It's a Nitzky thing, we require a lot of sleep, a lot of activity, and a lot of food. If we do those things, we're unstoppable.

My plan this week is to get somewhere around 60-70 miles in 4 days of running and then next week take it easy to get a little rest before Across the Years. 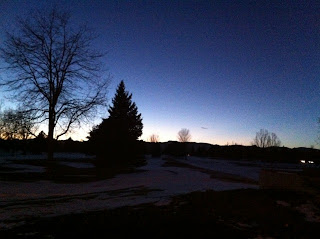 So we made it to solstice, the world didn't end, and we move forward. After another 9 hours of sleep last night, I'm ready to celebrate solstice with a 20 mile run today. It looks like the sky is clear and it's already 16 degrees, and the sun isn't even up yet. Happy post-apocalyptic running!
Posted by Alene Gone Bad at 7:00 AM