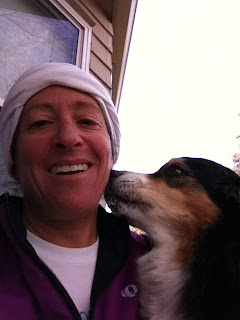 Yesterday I ran about 11 miles, including the Fort Collins Running Club 6K at Spring Park. It was a huge turnout, we got 87 runners. I remember days when we used to have 6 show up.

I ran as hard as I could but even on my warmup I could tell that the legs were burning and as soon as I got started, I could feel it. The run was 3K downhill, then 3K uphill, and I wasn't even moving very fast on the downhill. Made it back about 50 seconds slower than the time it took me to go out. 28:53.

Not very fast, but it was a faster pace than I would have run if I didn't run the 6K. On the way back I was hurting and kept my mind off the pain by talking and joking with Jance, one of the runners in the club I've known for a long time.

We had a breakfast afterward at Fuzzy's Tacos, and Dennis and I sat with Joanne and Hunter Harms, they are going to be my crew at the race in Oklahoma City next year. Joanne lived in Oklahoma for a long time, she knows my friend Keith, who is also from Oklahoma, and a lot of the people I met at the race in OKC a few weeks ago.

Joanne is a serial marathoner, she's an endurance machine. I don't know how many marathons she's run in the past few years, but she runs races almost every weekend. She ran two 5Ks the day before yesterday, and then ran the 6K Sunday.

This is the weekend I work, coming up, plus I work Wednesday and have some other things going on this week, so I don't have as many days during my running week as I usually do. I got 60 miles last week and I'd like to do more this week but 60 will probably be all I have time for.

Today I did 30 miles and pushed harder for a little over an hour of my run, around 8:45 pace, and then backed off and took it easy the rest of the time. I finished it in under 5 hours, which isn't too bad. Iris did 2 of the miles with me, she needed an easy day. I felt surprisingly good today, ran the last uphill mile in 8:09, which is good at the end of a run. 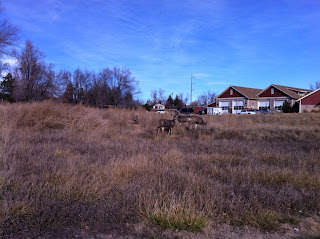 I ran a double Spring Creek Trail out & back. I was planning to go to the lakes in Loveland, but it was so windy this morning, I didn't want to be out there exposed all day, plus the driving time eats up part of the day. It was a better choice to stay here. I came back to the house to refill my bottles and grab some food after 15 miles, and that was all I needed.

Along the Spring Creek Trail, near Drake and Taft Hill roads, near the new fire station, there were 5 deer right off the trail on my last time through there.

Tomorrow is tempo night with Wheaties Boy, and I'll do a few easy miles in the morning with the girls. 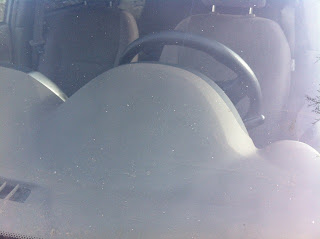 It was windy and cool today, but at least there was no smoke. On Saturday it was so bad in town from the Fern Lake fire near Estes Park that I had ash on my windshield. I ended up driving out to Windsor to run, east of here, hoping it wouldn't be as bad. It was better, but you could still smell it.

Not much else exciting going on around here, but I do have a beer report from this weekend. Occasionally I'll buy a mixed 6 pack from the liquor store around the corner to try some different beers. This time I chose an oddball. It was called Wild Blue and it's from New York. It's blueberry flavored beer. 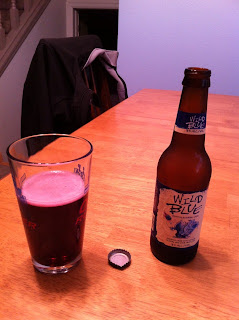 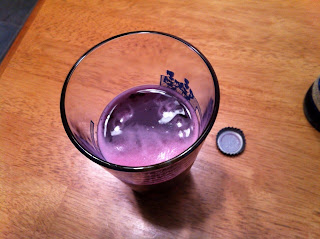 I thought it would be more like beer with a hint of blueberry flavor, but I got a surprise when I poured the freaky stuff into a glass. It's the same color as blueberries. And it tastes like blueberry champagne. It was sweet. Ugh!

I kept taking sips wondering if it would start to taste better, but it didn't. Finally I poured a little in each of the girls' bowls, as they are beer connoisseurs. Iris liked it, but Isabelle took one sniff and walked away from the purple puddle in her bowl. Iris ended up drinking Isabelle's. 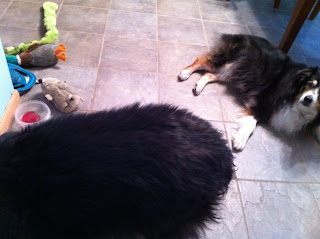 You know it's bad when even your dog won't drink it. I don't recommend this one...
I ended up pouring most of it down the drain.

On the other hand, I have a few little things to do today, and once I'm done, it will be beer-thirty again. Today I will have a New Belgium Snow Day. That will be good. A dip in the hot tub will make it taste even better.
Posted by Alene Gone Bad at 3:53 PM

Fruit in beer is a hit-and-miss thing. The Belgians do it awesomely (Framboise, Kriek, etc.), but I seem to enjoy even the admittedly awful ones (Leinenkugel's has a couple that no one but I will drink). Ooh, it's time for Christmas beers... the Sierra Nevada Celebration Ale some years is very fruity. I need to go shopping now.

Steve, I *LOVE* Sierra Nevada Celebration Ale most of the time. This year was good, this last 6 pack contained one and it was the best one of the six.