As Green As It Gets 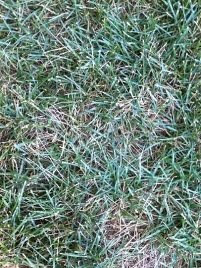 I have to admit today I'm feeling a little envious. Maybe a lot.

Why? Because one of the runners in Badwater this year, Cheryl Zwarkowski, just announced that she is doing a triple crossing of Badwater this summer.

I wish Cheryl the best and that she has as much fun as I did, and that it all goes well for her. I would love to be out there doing it. She will be the first woman to do a triple crossing. I had thought about doing a triple, or something like it, but maybe not the traditional way. I still have some ideas about a future multiple Badwater, that will likely include an unconventional route based on what I learned last summer in my road double.

I know some people are asking if we're all crazy, how many times can you run across Death Valley before it becomes kind of silly, like a one-upmanship madness? Danny Westergaard holds the record at six times.

For me, I've never felt the need to exceed what someone else does just for the sake of doing that, but I certainly have entertained the idea of a triple, or another double, or doing something else similar. And I might still.

Why? Because it was so much fun last summer, and I cannot explain exactly what it is that drives me and a few others to keep crossing the valley. The best I can do to describe it is this unmatchable feeling of moving forward, in the heat, under the huge sky, and dwarfed and surrounded by the incredible geologic formations there. It's a magical feeling.

Steph and I are doing a girls' trip to Death Valley next spring, just to be tourists and see the places we never get to see during the race because we're so busy and tired. I am sure that trip will open up some ideas for me.

For now, I can't be too green with envy because there isn't a lot of green around here. The High Park fire is just about fully contained and getting snuffed out quickly.

We had a little rain, some humidity and cooler temperatures for a few days last week, and a lot of people who were forced to evacuate due to the High Park fire have been allowed to return home. About 260 homes were destroyed and I don't know how much damage was done to the ones still standing, but people want to move forward with their lives.

And there are a lot of people who are incredibly grateful for the firefighters and everyone else who worked on the fire and helping the people and animals affected by it.

It's been nice to have clear skies and no smoke again.

Unfortunately in Colorado Springs just 2 hours south of here, the Waldo Canyon fire has been destructive and we keep getting bad news from there. Kathleen and Steve from Happy Trails safely evacuated and last I heard their house was still okay, but I'm waiting for an update from them, hoping for the best for them. 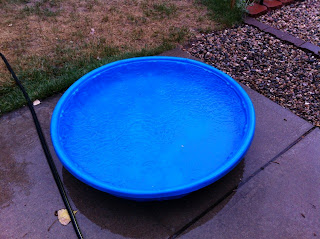 This is what we need desperately here in Colorado.

So today I had the run from hell. I want to assure my readers who are new to running, that even after all these years, yes I still have occasional days where I feel like crap. And today was one of them, taking running enjoyment to a new low. Who ever said I don't like extremes, though?

It felt like I've gained all the weight back I lost last spring. I haven't gotten on the scale to find out, that would be depressing. I gain weight so easily, I'm like a fat magnet. I know I can lose it again though, haven't been working out much and I certainly haven't been watching what I eat lately. Since I got back from South Dakota I've been very undisciplined and I've eaten more ice cream in the past week than I think I did in the previous year.

Yes, today I really did feel like a cow, or a watermelon with legs, have you ever watched a cow try to run? They have this big old body and little skinny legs and the legs have almost no striding ability. They just move along as fast as they can to transport this huge body. And that's how I felt today. Or maybe like a rabid bison.

So I suffered through 35 minutes even though I wanted to do an hour. The good news is that I have no residual soreness in my feet or hips after carrying the pack on the Mickelson. But I felt lousy. I came home, got on the bike and went for an easy 10 mile spin. I work this afternoon for a few hours, so I'm just goofing off today.

Tomorrow is July 1, end of vacation, back to business. Time to drop the lard again and start moving. Shannon is going to start kicking my butt with regular tempo runs again this coming week. And I have to get my shit together in my life, I've been slacking off on so many things.

I have two things to focus on for the next 6 months: studying for and passing my oncology certification exam, and getting a PR at 48 hours at Across the Years.

I'm headed to Death Valley in 2 weeks! How did that happen? It feels like summer has already been here forever, it started so early this year. When I get back from Badwater, I am ready for fall. The wildflower garden is ready for fall, too. The sunflowers and lilies are starting to take over where the blue flax and poppies were. 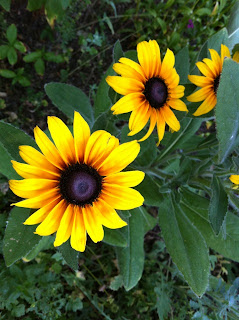 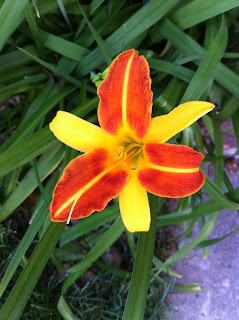 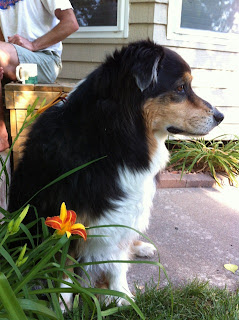 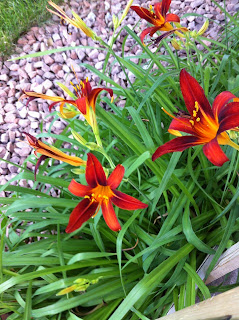 I didn't realize Badwater was so soon! Holy crap, how is it July already!?

Badwater is July 16-18. And then it's fall. Actually tomorrow is fall. Because I said so. Happy fall!

Triple crossing?! It's not enough to be totally insane? What's MORE than totally insane? Double=mega-insane? Triple=Giga-insane
Cheryl's a giga-ckick. She's inventing giga-running. Ultra-running's for pu**ies, I guess. I gotta read the about this when its done. Yes, "read". You're not getting me to Badwater in summer, even in an air-conditioned car. LOL
I know what you mean about being a fat-magnet. Misery loves company. Maybe we can start a fat-magnet run after BW? Maybe we can munch on some Purina cow-chow while we run? But unlike you, I am getting some exercise and eating right, but my body doesn't seem to care. It's reacting as if I'm sitting on the couch eating fried chicken. This old age is for the birds.

I guess I have found the fountain of youth through my double mega giga insanity. Good news though, I got on the scale and I only gained 2 pounds back.

Maybe you should get your thyroid checked!