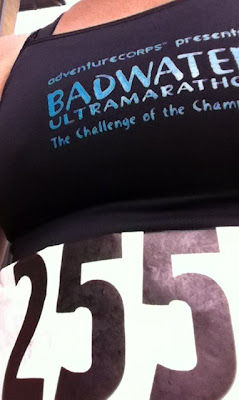 So I got a humbling lesson at the Rat Race 5K. I'm not so fast. I should have already known that. I ran 11 seconds slower than last week. Not that I was expecting anything big, just a few seconds faster would have been nice...

Wah, wah, wah. I sound like one of thsoe whiny nerdy road racers talking about all the excuses why they didn't hit a PR during their race. And they give a play by play breakdown of their 5K race that takes as long to spit out as the race took to run.

So I'll spit it all out, I can come up with some whiny nerdy excuses: I think this course might have been a little slower given the half mile or more of washboard dirt road during the second mile.

Ault smells like sheep. I think it should be renamed The Sheep Race. The race was a fragrant mix of the smells of sheep, cows, water treatment plants, irrigation ditches, and cornfields.

This is humbling, but it's very good for me. It will teach me not to expect to improve unless I do the speedwork, so I guess it's time to get going on that.

The good news? The hamstring didn't bother me at all. Maybe the massage worked. The hip is still sore, but I don't feel that on the run, only afterwards.

And it was a pretty sunrise. 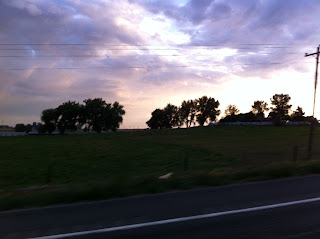 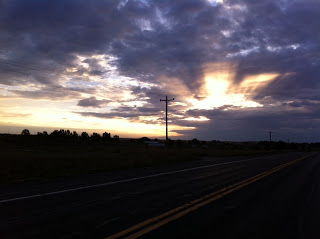 I have to find the next 5K. Next weekend I work, so it will have to be after that. And I have those two weeks to fit in some real speedwork. Now I just need someone to kick my butt into doing it.
Posted by Alene Gone Bad at 9:39 AM