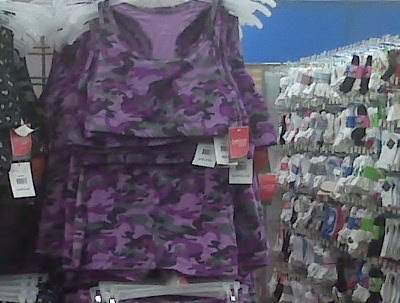 I always like to do something creative with running on my birthday. It doesn't always happen, and more often than not, it snows on my birthday. But three years ago, when I turned 45, I invited some friends to join me for a 45K birthday celebration called "One Foot in the Grave", celebrating being halfway to 90. We ran around the cemetery for 45 kilometers, or 28 times around the one mile loop.

This year I have a different idea. Tonight, after my thirty miler, and after a homecooked dinner of caesar salad and grilled salmon, Dennis and I went out to Walmart. Big date night for us. I used to avoid Walmart at all costs, but since I discovered its virtues as an ideal pre-running supply store, I do occasionally find myself there, once or twice a year before a big race. Then my neighbor had to get me hooked on this girl beer, Michelob Ultra (3.2) with pomegranate and raspberry flavor. I can't find it anywhere else in town but Walmart. It's a great recovery drink after a long run. So now I go to Walmart to stock up on 3.2 beer.

OMG, what has happened to me?

So we made our excursion over to the Timnath Walmart, closest to our house. It was an adventure, as Walmart always is. We got my stash of girl beer, then we got a couple of other items. I was trying to find some inexpensive kitchen towels, since I just threw two of them away that were gross and disgusting. I asked a Walmart associate who was busy scanning items in the shampoo section. He enthusiastically offered to walk me over to the kitchen towels, even though I told him he could just tell me where it is. I was impressed with his customer service.

With Dennis following behind pushing the XXL shopping cart, the associate led me across the store, past the incontinence section, and down the main east-west aisle, past the displays of interesting clothing. Walmart fashion is so eye-catching, I couldn't help but do a double take at this sports bra. Purple camo. They also had matching tank tops. Very cool. I also noticed that the associate had rather large love handles flopping over his waistband, but I could barely keep up with him, with my post-long run stiff old lady limp.

After we picked out a few towels, I led Dennis back over to the purple camo bras. They were only $8.00, but they didn't have any smalls left. Bummer. In the adjacent aisle there was a display of animal print "extreme push-up" bras. They weren't sports bras, though. There is nothing quite like Walmart fashion.

Then the lightbulb went on in my head. I hadn't used my brain all day, apparently it was recharging for five hours while I ran. I was ready to go, gears grinding at full speed.

"I know what I want to do for my birthday this year," I announced to Dennis.

He rolled his eyes.

"I want to do an Extreme Running Tour de Walmart: Shop 'Til You Drop. I want to hit all four Walmarts and buy an article of clothing at each one, and wear it."

We have four Walmarts within reasonable running distance of my house. Two are in Loveland, one is in Fort Collins, and this one in Timnath.

Now that I am older, I need to run more miles. I could do 48K, but I wouldn't be able to make it to all four Walmarts, so I think I need to get tough. I can do 48 miles, and it would be a good workout for me at that point in time. I need a fifty-ish run soon, so this is perfect.

Dennis agreed to be my mobile aid station, he'll be my crew at each of the Walmarts, I can re-fuel along the way.

Now I just have to figure out the route, and invite anyone who wants to tag along for all or part. My birthday is March 10th, which is just three weeks away.

What a fantastic idea! I amaze myself...

Email ThisBlogThis!Share to TwitterShare to FacebookShare to Pinterest
Labels: Walmart

Pam, that would require some coordination, my brain is not that coordinated. Great idea though!

Heather I wish you could come up here and join us. But it would probably be too cold. But you have potential down there for a tour de costco. Great fundraising opportunity?

I've been trying to come up with a theme for my 50th birthday run. I think it'll have to be chocolate-related, or no one will do it.

Chocolate is a great birthday theme. You have to take a bite of chocolate every mile? How far are you from Hershey, PA? Or maybe higher quality chocolate, like Ghirardelli. Or Scharrfenberger. Might need to go to San Francisco to do that. Hmm...or Switzerland

Sometimes, after reading someone's blog, I feel like I know them, or they get in my mind. I thought of you today as I ran. For my birthday, I ran 53 laps around a small park. A friend with cancer actually walked the 44 miles for her birthday. Last year,when I lived in cold Kansas City, I went in a night fat ass 50k for my birthday (January 12th in Kansas is coollldddd).

Ultra Monk, I don't know why so many of feel compelled to run or walk a certain number on our birthdays, but it must be thumbing our noses at the aging process.

I'd prefer to run 48 laps around something than run from Walmart to Walmart, but I do the solitude thing most of the time and this seemed like an opportunity to have some company. Most people don't appreciate running around in circles as much as I do. But there are a few of us...

I'd like to join you for some of the run/fun to celebrate your birthday, but I won't be shopping at Walmart. Call me s snob, and I won't say that I never shop there, but only when I absolutely positively have to because I can't find something anywhere else!

Connie, Walmart snob or not, I'd love to have you along on the run! But you never know- you might just find some wild garment you can't resist, or find anywhere else! Walmart is best for the entertainment, anyway. Bring a camera!