No Monkeying Around: Badwater Double 2011 Pre-Race 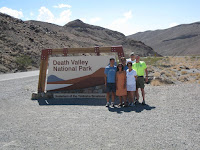 The Colorado crew, arrived at the Denver airport on Friday July 8th to catch our flight to Vegas. Nathan, who was in Arizona cleaning up from what we called his "Haboob Job", would meet us in Las Vegas Saturday.

We made it through security, and only Felix got frisked because he had chapstick in his pocket. My strategy of packing all my crazy outfits, the powdered drink mix, and the S caps in my checked baggage was a good one. Our flight was delayed by a couple of hours and we sat around the Denver airport, taking pictures, and crewmembers getting to know each other. Steph and I noticed there was instant good energy among the crew, Dan, Ed and Felix.

Finally the flight took off, we got to Vegas, and riding the shuttle to the rental car office, we noticed this ad. 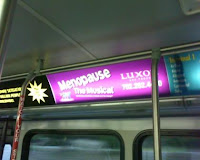 We picked up the rental van, and ran into Mimi Anderson's crew. Mimi was running a Badwater double, too, and she planned to do Whitney. We heard the snow and ice up there was a lot heavier than most years, and they were going to need crampons. 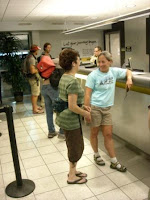 We got good sleep in the hotel and in the morning we became the "People of WalMart." I even wore my special "people of WalMart dress" that makes Dennis cringe. He tells me I look like Pebbles from the Flintstones when I wear it. But it's perfect for WalMart!

The ribbing began immediately. On the rental car shuttle the day before I told the crew that I had listed on my Badwater medical form as one of my health conditions "Random Perimenopausal Bitch", so they instantly began seeking out solutions to this problem, should it flare up during the race. 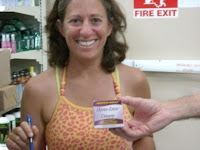 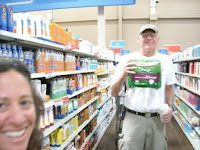 Nathan met us in WalMart, having successfully cleaned up his house and pool after the haboob, and we got all our shopping done in 3 shopping carts. We took off for Pahrump, on the way to Death Valley. There we stopped at Taco Bell, topped off the gas tank, got water, and headed for Furnace Creek. On our way, Felix took a little nap in the van. He was well-rested when we arrived. 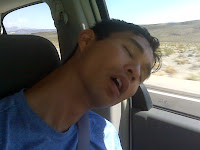 At Furnace Creek, we checked into our rooms and went to dinner at the 49er cafe and did some shopping at the general store. Sunday morning we began the process of preparation of the van and Nathan's car, the shuttle vehicle. My job was to hang out and relax in the air conditioned room, drink and eat as much as I could, take a nap, and generally expend little energy. 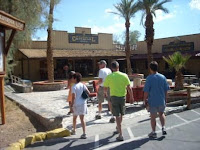 Sunday morning, Steph and I went to the racer check-in. We brought our reflective gear and our $1.00 bill to the front door, which allowed us in. Many racers did not have this and were turned away until they could bring these items. It's Chris's way of ensuring that everyone reads the rules.

I got my pre-race bag and did a little shopping for crew t-shirts, and Zombie goodies for Dennis and a few other people. Marshall Ulrich generously gave a signed copy of his book to each entrant. I got a check in my bag for the PVHS Foundation from Frank McKinney, another Badwater entrant, who gave from his own charity to each of the runners who were running for charity. Generosity seemed to be the theme of this year's race, which was fitting.

Later that afternoon we went to the pre-race meeting for the 0800 start wave. In past years it was always at the Visitor Center but that was under renovation and we held the meeting at the smaller Marquez Room of Furnace Creek Inn, up the hill, necessitating separate meetings. We could only have three crew members in addition to the runner, so Steph and I brought Dan and Felix, the Badwater crewing newbies. Dan's eyes were as big as saucers. 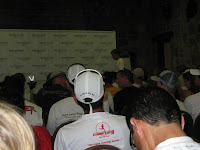 There was a "crew training" meeting with Corey and Jay, two of Chris's right hand men on the race staff. Most of the crew attended this, and said it was very helpful. Dan got a chance to get a lot of questions answered. 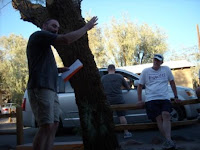 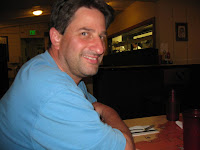 Nathan, my brother, photographer, gadget expert, and king of multitasking. 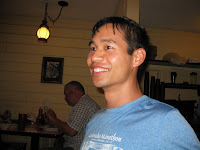 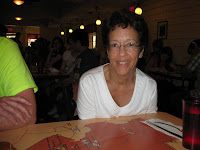 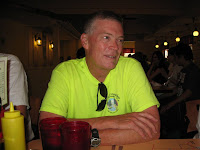 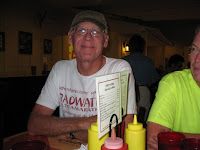 
The crew spent the rest of the day preparing the van and keeping the princess locked away in her chambers. We got take out dinners from the restaurant, went back to the rooms, and had a crew meeting. Nathan surprised us with a body bag he brought, which my niece Jenny had decorated in glitter, with the Puke-Free Zone logo. 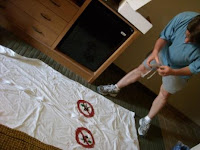 The crew also decorated the van with a puke-free zone flag on the antenna, which lasted all of 5 minutes in the dry Death Valley wind. 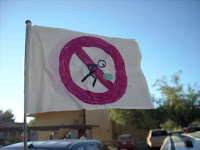 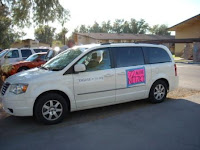 I had told Felix that my co-workers had sent a monkey with me. The monkey is something that sits on the counter at work and whenever one of us goes on a trip, we take the monkey and take pictures of it wherever we are. They insisted on my bringing the monkey to Badwater. I hesitated, knowing that the crew would have other priorities and how difficult it was to find things in the van, but I went along with it. I asked Felix to get a picture of me at the Badwater sign with the monkey. I was relying on him to remember because I had way too many other things on my mind.

Being oncology nurses, they sent this little note with the monkey. 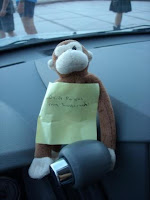 Finally it was evening and I took my last bit of alone time, and taped my feet. Steph came back to the room and we went to sleep. I slept great...