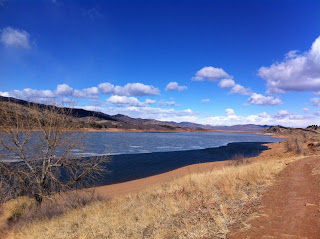 Halfway through the week, and only a week to go until March. Where is the time going?

I can't complain about winter going by fast, as it is my least favorite season, and...we'll be changing the clocks again soon. On my birthday, this year. I'll be in an airport somewhere, probably Nashville, on my way home from the Delano Park race. That means I get to enjoy my birthday for 25 hours instead of the usual 24.

I got the bad news late last week, the time off I requested in May to run Cornbelt was not going to happen. I was really annoyed at first because I put in for that last October. But we are slaves to this merger now, and we are being held hostage May through July. It was time for creativity in scheduling. I've been training my ass off since last fall. What was I going to do?

I moped around for the weekend and early this week. It definitely contributed to my poor sleep over the weekend. I've been so frustrated with so many aspects of this merger. It's affecting everyone in so many ways. I had no idea what I could do, I'd signed up for a 50 miler in late April, but the only option to lengthen that was 100K, and I needed a longer race.

I'd considered North Coast 24 hour earlier in the year but thought the spring race was the same weekend as Cornbelt. I always wanted to run North Coast because I've heard so many good things about it. But the trip would be expensive, with airfare, rental car, hotels, big city expenses and hassles like parking and traffic, and where to shop for race supplies.

Cornbelt on the other hand, is a long day's drive from home, or can be broken into two days, there is no traffic, it's very low key, midwest, rural, cheap hotels, no air travel, no rental cars, traffic, parking, or bad parts of town. I can haul everything I need in my vehicle.

I was back at work on Tuesday, eating lunch, turned on my phone to Facebook and saw that one of the runners I know from the east coast had signed up for North Coast, but it was April 20th! The lightbulb turned on. I immediately emailed the schedule goddess, and asked her if those dates would work. She wrote back and said they would. I had an alternative!

So I spent most of today figuring out arrangements for North Coast, and things came together nicely. One of my longtime ultra friends from much earlier in my running days, Lynn Newton, lives in Columbus now. I've known Lynn and his wife Suzy, and their daughter, for many years, and we all lived in Arizona for a while. I wrote to Lynn and asked him about North Coast, and if he knew about Cleveland. He suggested I fly to Columbus instead and stay with them, and drive to Cleveland just for the race.

When I looked into it, it turned out to be a much more economical alternative. The airfare and rental car were much better in Columbus. So I've made my plans, signed up for the race, and all I have to do now is buy my ticket and book my hotel room in Cleveland and rental car. It will be great to spend some time visiting with Lynn and Suzy.

Tonight it is sleeting outside and we're supposed to get 3-4 inches of snow by morning. We need any moisture we can get, but it really won't put a dent in our drought. No, there's no climate change...I'm fearful that we will have a horrible fire season like last year. And unfortunately we'll be stuck here this summer...

Today I was off work, after just one work day. As a result, I can't really call today a work hangover but I was tired anyway, slept until 8:15 this morning, missed my nap this afternoon. I called in sick to work on Monday. I wasn't sick, but I was sleep deprived.

I've been describing this anxiety thing in my recent posts. I was up during the night on Saturday, my brain spinning around in my skull again, over all sorts of things that I can't do anything about, but I couldn't get it to quiet down in there. When this happens, I'll be up for several hours, and then in the morning I feel like crap.

Sunday my sleep pattern was all messed up. I went for a 21 tempo mile run, most of it with Wheaties Boy. It was a great workout, but I was tired later in the day, a combination of the beer tour, high mileage, lack of sleep, and the anxiety thing.

After the past several weeks of bad things happening at work in the evenings, including the night when I was there alone and the patient had that reaction, I wasn't looking forward to the possibility of that happening again if I was already exhausted at the beginning of the shift.

I'm getting sort of tired of having to stay late and do paperwork on transfusion reactions at the end of a 12 hour shift, and if I'm sleep deprived to begin with, and I'm stuck closing, and something goes wrong with a patient, I really don't want to be having to think on my feet with an emergency when I'm brain dead myself. If I were a patient in trouble I wouldn't want my nurse being sleep deprived and unable to think clearly.

So I took a "mental health day" and saved myself the agony of schlepping my body through a 12+ hour shift as Zombie, RN. I slept in, took a nap, and it was windy as hell, but I went up to the foothills and did a 10 mile trail run. More like a trail crawl. Absolutely dragged myself up the trail, my legs were screaming. I texted Wheaties Boy and told him I'd be thanking him on race day, after I was whining on the trail.

I'm going to make this a high mileage week and then next week I'll cut my miles and do a 2 week taper before Delano Park. After that it will be just 6 more weeks to North Coast!

Oh yeah, one more thing, has anyone noticed their local McDonald's advertising something called "Fish McBites"? Are they serious? That is gross. Obesification knows no bounds, or decency.

Hooray for alternate plans working out!

I saw something about fish bites, and thought I was hallucinating (because there's no way something like that should exist), and never googled it. That sounds VILE.

Yeah, it's really good when things work out, and they come together so easily. Must have been meant to be. Otherwise I think my head would have exploded.

I think fish mc bites or whatever they are should be banned. Who is their marketing person? They must be on some bad drugs.

Yeah, the fish bites look and sound GROSS! Who eats those things???
Glad you were able to come up with a good race alternative. I am feeling your pain in regard to your agonies. Poor sleep, anxiety, tiredness, and long days = no fun. Hope things can improve for you quickly. FYI - we ended up with about 6 inches of heavy, wet snow. Nice to get a little moisture, FINALLY!!!

Glad you got some snow. We got a little, only about half of what you got, and it wasn't very heavy, I swept it off the sidewalk with a broom. I work Friday but then have 4 days off after that. I will survive. Just having the race plan makes me feel oh so much better.

I hope you start feeling the Cytomel soon!