Go ahead, make my day!

I'm in an extraordinarily foul mood today. I have a brutal work hangover and I need a nap, bad. The world needs me to take a nap.

After two long, busy, exhausting days topped off by a patient who tried several times to bite me, and other miscellaneous circus-like activity at work, I was ready to blow holes in the roof when I got home last night at 8:50 pm. Plus I had to be back in the morning for a 2 hour staff (antibiotic resistant staph) meeting that started at 7 am.

So I barely got enough sleep to open my eyes this morning, and I stumbled out of bed at 6 to get my butt out the door to the meeting. Two hours in a meeting makes me want to bang my head against the desk until I pass out. 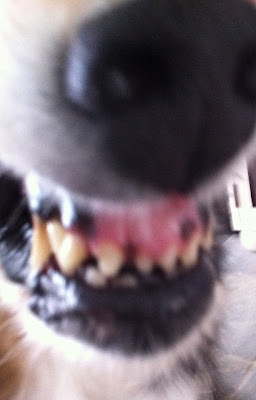 Do not mess with this mom of Buffaloes. 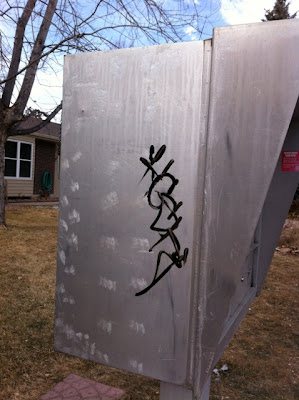 When I got home from the staph meeting it was daylight and I saw the community mailbox in our front yard. Some dimwit tagged it overnight. We don't see too much of this in our neighborhood but every so often some dumbass will do this to a fence or the sidewalks. This time they got it on the mailbox that happens to sit in our front yard. If I catch the little motherfucker in my front yard I'll blow him away with an AK47. GO AHEAD, MAKE MY DAY.

Before you think I'm serious, I probably wouldn't be able to figure out how to shoot the damn thing. I will never own a gun and I have no use for one. I have never shot anything other than a water gun or a cap gun since I was a kid playing with my brother's toys. Personally, I hate guns. I tolerate their existence as possessions of other people, is all. If it were up to me, there would be no guns. Ever.

Actually here's another good reason NOT to allow guns. If they get in the wrong hands, like a RPB like myself today, they could do a lot of damage. I haven't even gone into the gun issue on this blog and really had planned to avoid it. Actually I think my bare hands could do more damage than a gun if I ran into this little booger with the spray paint can today.

But since we're talking about guns, I'll just say that I think the display of paranoia by a small percentage of the population regarding the gun issue, namely those who are comparing Obama to Hitler, Stalin and such, like the Wayne LaPierres of the world, is a good reason why THOSE exact people, the assault weapon and gun proliferation advocates themselves, SHOULD NOT be allowed to have guns in their possession. They are delusional and just plain bat shit crazy.

If we've come to the point where we need guns in schools, it's time for a nuclear flattening of the planet and let some other life form with far greater intelligence than humans start over in a galaxy far, far away.

Unless, of course, those crazies were willing to turn those guns on themselves, which would allow them to be Darwin Award recipients, and remove themselves from the gene pool, greatly improving the future prospects of this country.

And that's all I have to say about that.
Posted by Alene Gone Bad at 2:13 PM

I think it would be a very good idea to not mess with the buffalo's mom on her work hangover day. Definitely not a good idea. :-) I also think you and I could have some good back and forth banter (hopefully in a good natured way) in regard to guns and other political nonsense. Recover well! :-)

Thanks Kathleen. I hope things are going well for you. And that you got some good weather to play outsisde in...recovering slowly here. One of these days we are going to run together!