Tank Girl at the Track 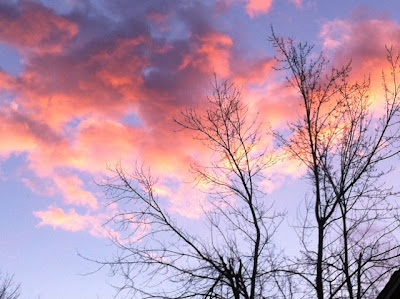 At the track this clear and cold morning I did 20 x 400 meters and I was just finishing up when the CSU distance runners showed up to do their warmup. I did my cooldown run in the outer lane while I watched them begin their workout.

My own workout was consistent, but slow. In this first workout of 400 meter repeats, I was running each of my 400s about 8 to 10 seconds slower than I was 6 years ago. Again, this is my baseline workout, just seeing where I am. I feel strong, but so slow. My legs don't want to turn over like they used to. Not that I was ever fast, or had good turnover, but these days as I struggle to regain some speed, I feel like a tank.

Janay DeLoach, our local Olympic bronze medalist in the long jump, was also working out at the same time. She is beautiful to watch running, pure speed, and so graceful on the track. It looks effortless, like she doesn't even touch the ground- she appears to be gliding above the surface of the track, so smooth, it's a hard contrast betwen her and the average plodding runner, even one with a little speed.

She has so much strength, driving her arms and legs, each moving forward in a perfect plane, with no wasted motion. Watching her go from fast to all-out, you'd think she flipped a switch somewhere and all of her body went along with it, there was no awkwardness, no digging in, no effort visible whatsoever.

There I was, the tank, clunking along on the track, compared to her.

It was fun to watch the team working out too, reminds me of the days when I was an assistant coach at Western State and everyone on the team encouraging each other, yelling until they were hoarse, all working together to perform at their best.

I went in for my annual physical this afternoon. I'll have to go get a million labs drawn sometime in the near future where some phlebotomist vampire will suck out all my hemoglobin in little tubes and reduce my oxygen carrying capacity. I need every red blood cell, I don't have any to spare. I didn't go get my blood drawn today, I'm too dehydrated and they wouldn't be able to find my veins.

But I did have to pee in a cup. It's torture, I tell you, sort of like in the movie Tank Girl, where they are so desperate for water that they'll drain all the fluids out of your body and all that's left is a heap of powdered remains.


Tonight I followed up with an 8 mile run, giving me 21 miles for the day. All that's left on the agenda is sushi, and then rehydrating myself with WATER... and then sleep.
Posted by Alene Gone Bad at 8:42 PM

Sushi is the BEST after a long run day. Who am I kidding. Any day.

Heather, 400s are the best because they are short bursts of pain and you get them over with. And sushi is the perfect recovery food. Any day.

One of these days you need to try my favorite sushi place in Las Vegas, Sushi Freak. Let me know if you ever do a run there, I'll tell you how to find it. Maybe I'll even fly out and meet you there.

"Tank Girl" is one of my guilty pleasures.

I use repeat 400's to teach runners what I mean by "easy" and "hard." The first time you think of where you are in the workout is about 80% effort. The point when you start thinking about how many you have left is 85%. When you have to talk yourself into each one, it's 90%. And when you stop in the middle of one because you can't go on (and your coach yells at you to keep moving) it's 95%.

I think I was at 90% the whole time yesterday. But I did it.

When I think back to the workouts I was doing just 6 years ago, and then 10 years ago, and 20 years ago...I realize I am running in a different body now. I need to find out how much youth I can recover in my legs.