Tools for Nurses vs. Nurses as Tools 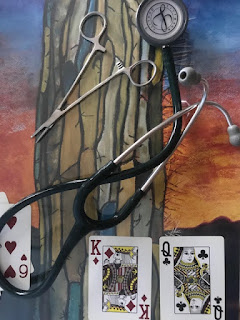 It's that time of year, we're approaching Nurses' Week, drawing the ire of millions of nurses across the U.S. May 6-12, to be exact. It's the week where we are reminded of the hand we're dealt, the King of Diamonds versus the Queen of Spades- the analogy is the rich mostly male executives wielding their power, watching over a mostly female workforce being forced into digging their own graves.

In 2015 on the TV show The View, the hosts mocked the Miss America contestant who was a nurse, asking why she had a "doctor's stethoscope". Apparently unaware that nurses are the ones who do physical assessments and actually use those tools more often than doctors, it came across as crass and uninformed to the large number of nurses who saw and heard the remarks. The good thing that came out of it was a flood of activism which resulted in formation of the group now known as Nurses Take DC, to fight for safe staffing and safe patient limits in the workplace.

Skip ahead four years, and another uninformed comment from a prominent person got the whole nursing world riled up again. Washington State Senator Maureen Walsh made a comment about nurses playing cards most of the day, again inflaming nurses' collective frustration with the ignorance and disrespect with which nurses are treated, especially in the workplace by those decision makers around staffing. Chronic understaffing, overwork, burnout, moral injury, and unsafe conditions for adequate patient care plague the healthcare industry in its sociopathic pursuit of profit.

This time, in response to Senator Walsh's comment, and her weak, non-apology that is now becoming a whine-fest-she's complaining about all the mean comments she's received, nurses have mobilized again.

To Senator Walsh, sorry ma'am, but if you go into politics, you're a public figure and you're going to get public scrutiny. Next time watch what you say and if you screw up, offer a real heartfelt apology and start making amends.

I don't condone people being rude or disgusting. They should be harsh AND tactful at the same time- it IS possible.

First nurses depleted the supply of playing cards in Amazon's warehouse by sending her thousands of decks of cards in the mail. Then there was a petition circulating that gathered some half a million signatures.

Hung by our Stethoscopes

So my question is, if over half a million nurses can unite over a stupid comment by a politician, why can't they unite over the stupid actions of healthcare leadership, including organizations such as the archaic and hypocritical American Nurses Association, which claims to represent us but instead acts in the interest of hospital and healthcare executives in the healthcare corporatocracy? Here's the example in Senator Walsh's own state... supporting the pathetic "staffing committee" proposal to undermine and subvert the aims of safe nurse staffing.

Sure, there's plenty of money for the industry executives to lobby for their own interests but somehow they can't afford to staff safely for patient care? Where are the half million nurses when it comes to these types of decisions? Half a million nurses signed the petition to get Senator Walsh to follow a nurse for an entire 12 hour shift. Half a million nurses should be signing this petition for National Legislation.

Nurses are afraid to speak up in their communities and workplaces because they have no power and can easily be harassed or threatened, and they don't want to lose their jobs, licenses, and livelihoods. The tactics used by management are ugly. In the vast stretches of our anti-union, anti-labor plutocratic country, we have diminished workers' control over their working conditions and job security. And we are seeing more deterioration in the workplace, in the form of violent attacks against nurses.

Furthermore, with the consolidation of hospitals and healthcare facilities under bigger corporate umbrellas, near monopolies have been established, making it harder for nurses to find alternative companies to work for if they don't want to or can't relocate.

We need a giant set of hemostats to stop the hemorrhaging of nurses and their working conditions before healthcare implodes and completely collapses, resulting in more medical errors, more deaths, and more violence.

Executives use their excuses where they can to manipulate the workforce- using data like HCAHPS (patient satisfaction) scores as a cudgel to terrorize employees around their job security. They never count the human cost of abusive manipulation of employees and their families. These big corporate entities feel no responsibility toward the communities where they exist and employ people who live there, trying to make a living, and being worked harder with fewer staff and deteriorating compensation. It's a sociopathic system and there is no empathy- it takes a true sociopath to buy into the corporate data-pushing bullshit.

Here's are some small examples, and I mean small because they don't directly impact patients- wage theft by employers when nurses they have more work to do than they can finish in a 12 hour shift- by forcing them to clock out after 12 hours and work without pay. Also, when nurses don't get a break they are not allowed to charge for working straight through- they lose pay. And if they try to recoup those wages, nurses are subject to disciplinary action.

Healthcare is a human service, it cannot be run like a factory. Our lack of a human-oriented healthcare system is costing us more and delivering worse outcomes than other industrialized countries and it's not getting any better. Pissed off patients and families who come to expect "customer service" as if they were in a hotel or restaurant will act out aggressively when they are tired of waiting for overworked, rushed healthcare professionals without adequate support staff.

We can let it fall apart and pay an even higher price in the form of more morbidity, mortality, and trauma, or we can use that same fervor we unleashed against a politician's dumbass comment to unify ourselves, watch each others' backs, and take back our control and power over the situation. There are more of us than there are of them. But we need to be unified. We need to join together and speak in one loud strong voice.

I challenge every nurse to take a first step by joining a grassroots organization in taking back healthcare for everyone- especially for the good of the patients we are supposed to be caring for. (bonus: you don't have to pay dues) Don't be fooled by organizations that claim to represent you then backhand you when you're not looking. Sign the National Nurse Patient Ratios Petition.

I promise you, signing a petition like this and joining a group like Nurses Take DC will give you more satisfaction than your job has given you in years! Take back your power over your future in healthcare. Lives depend on it.
Posted by Alene Gone Bad at 8:56 AM

Although I'm not in the health care field I wanted to let you know what is going on with the "next generation" of potential Health Care professionals. My daughter is a college freshman, she watches transplant surgeries for fun, she thinks on her feet, is decisive and compassionate. She will not consider being a nurse because she feels they are disrespected by Drs and patients alike. Isnt this ashame that someone who could contribute so much would never consider nursing. I support your efforts.