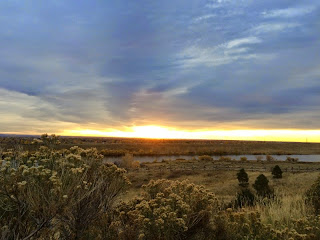 As we move later into the month of October, which is my favorite month, along with September and May, I am mesmerized daily by the colors and the sky.

This morning I went slightly out of town and hiked Arthur's Rock with Emma. I have not been in Lory State Park at all since we came back from Arizona, except to watch the staging area at the Quad Rock race. I always go to Horsetooth Park instead. 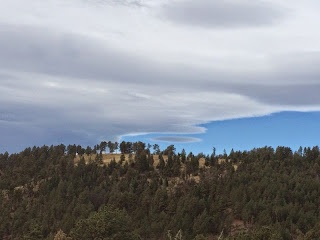 I forgot how much I love the trails in Lory. I used to run there all the time back in my Leadville training days but since my ankles went bad I haven't been up there. 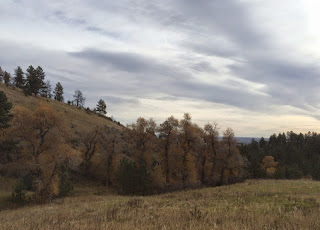 I've been wanting to get out and do some vertical, and even though this is hardly challenging vertical it was so good to get out. The trail is rocky in a few places but not bad. I didn't have any ankle pain at all. Not even one little twist or peep!

I've been working on my hip adductors and hip strength in general, and I think it's helped. Less likely to twist my ankle and not be able to correct myself.

I kept having to stop along the way to take pictures. 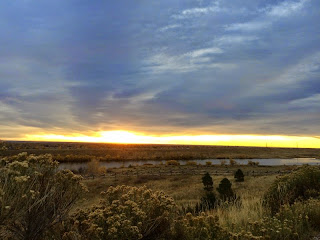 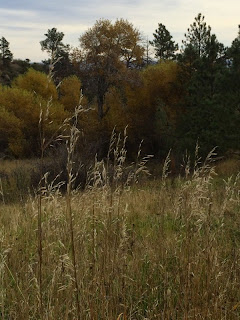 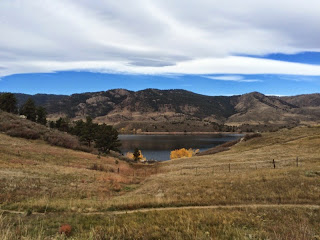 I am starting to go a little stir crazy from not doing much. In a way I'm enjoying it but my body is not too happy about being so sedentary. I'm looking forward to starting the workouts. I've been pretty much of a sloth this past week. I will start something next week, at least consistently get an hour or so of something with an effort each day. I've been walking a lot but that doesn't get my heart rate up very high. 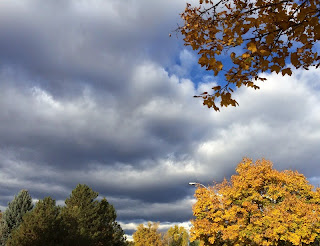 I've been busy, between webcasts, Hanginars, radio shows, tweetchats, speaking to students, the exercise support group I started, a book chapter I'm writing, a couple of guest blogposts and podcasts here and there, a magazine feature here and there, some advertising, and attending social and business gatherings, I stay busy. And of course, my clients. I love this.

I finally got my hair chopped shorter yesterday, I realized I haven't had a haircut since April! It was starting to look like a gray haired granola hippie version of myself at age 17. 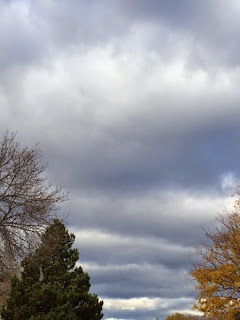 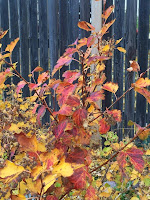 Not much to report on the ranting end of things though, just a mild one today. I was happy to hear that both nurses who were exposed to Ebola are now clear and discharged from the hospital. I hope the other doctor in New York is able to recover. We have so many more problems in our health care system that need to be addressed, Ebola is a tiny problem by comparison. It's not a tiny problem in West Africa though, and they need help there.

In the U.S., hospital acquired infections (HAIs) like MRSA and C.Diff infect and kill so many more people and cost so much more. So do medical errors. Yet the people in power don't get that underfunding and understaffing lead to these problems. It is interesting to watch the reaction of the health care community and the media hype and paranoia machine, Ebola is the pornography of the day and HAIs are just boring now. Doesn't anyone remember all the hype about MRSA a few years back? Most people probably forgot what it was. It's not this month's centerfold. 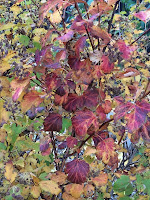 Nobody ever said you have to be smart to be in health care. Just because someone is a doctor doesn't mean they can think outside any box. Sometimes the people who are supposed to be the smartest are the ones who have the most inflexible ways of thinking and functioning. I've seen a few dumb nurses, but I think I've seen a lot more dumb physicians. And even more so in administration, Dumb and Dumber, because you always have to have the VPs and alphabet soup of chief executives to prop each other up. 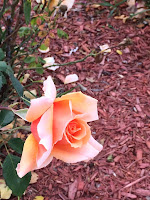 I am looking forward to next Wednesday because the election will be over. I am sick of the political ads and disgusted by how much money is being spent. I got these huge oversized postcards, full color, from the Colorado Democratic Party to remind me to send in my ballot. Are you kidding me? I would think if someone bothers to register with a political party these days, they are going to vote. Why spend all that money on direct mail? I already sent in my ballot.

I wasn't happy about the choices either. Don't tell me that Udall is going to do anything special. I only voted for him because I think his opponent Cory Gardner is terrifying. Needless to say the Colorado Democratic Party is not going to be getting any donations from me. We waste so much money in this country on these stupid political campaigns to elect people who don't do shit. And then we pay them even more to do nothing.

You know what scares me? Over the past couple of weeks I've been paying more attention to the mainstream media online than I usually do. I know about trolls who stalk the comment sections on most of these media sites. But I never read their comments. Until this week, because I was curious to see what people were saying about the Ebola thing and health care, to see if the real important messages were getting across to the public.

Nope. It became the same old slugfest of people who don't think because they can't form a rational thought. They can't write sentences, either. It's ignorant, hateful, racist and creepy. I hope that they just represent a small percentage of public opinion and voice because if this is mainstream thought, then we're in big trouble. We might as well forget about Ebola protection, let's have an epidemic and wipe everybody out and start over in a few million years. I am convinced that those people who troll the comment sections are not human. No hearts, no brains. Chilling. 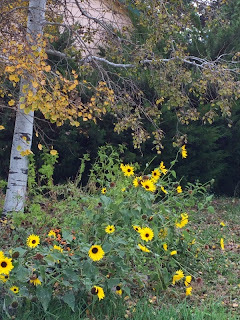 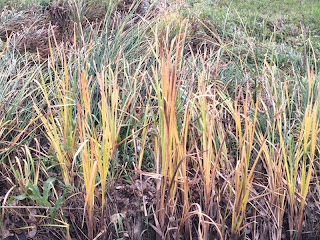 There's color everywhere. Just this week the leaves started to fall down, I know what's coming next, gray skies, bare trees, and ice. I'll enjoy the clear streets while I can. 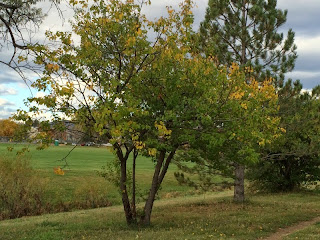 This, by the way, is the mother tree to our apricot trees. I took the pits from the fruit on this tree a few years ago and sprouted the seeds, and I planted 5 of them in our yard. Three of the five are doing well, two are as tall as me and another is 8 feet tall. 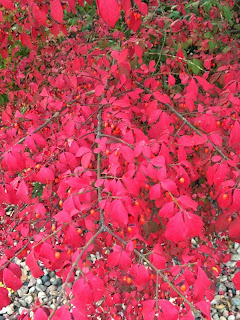 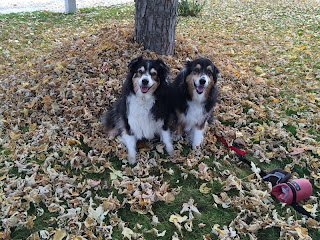 And the Buffaloes are enjoying the crunchy leaves.
Posted by Alene Gone Bad at 4:22 PM

Don't read the comments! If you want to stay healthy and sane.
It's even worse when you consider that some of those ill-conceived rants (e.g. about illegal immigrants and Obama being responsible for spreading disease) are posted under anonymous cowardly pseudonyms, by people we otherwise might encounter in the community, yet won't have an open and honest dialog.

That's true Mike! I forgot that there are those impostors making the comments anonymously, and very cowardly. Good point and important to remember!