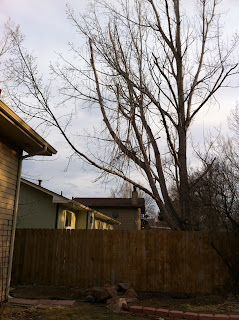 The eerie light on the tree trunks this evening and the hazy sky are a reminder of last spring's High Park fire, but this is March, and it's a different fire. The Soldier Canyon (now named Galena) fire broke out near Lory State Park this morning, first a small fire, then grew to 40, then 200, then 800 acres as of now, 6 pm.

Today when I went outside to walk the girls, I thought it smelled smoky, but thought maybe someone was grilling in their backyard. And my eyes have been burning all afternoon. It's been windy and gusty, but rain or snow are in the forecast for the weekend. Let's hope we get the moisture.

Already there are evacuation orders for everyone living west of the reservoir near Horsetooth Mountain and Lory State parks. Having to do this again, so soon after last year, has to be extra traumatic for all those people, and anyone who lives in those fire-prone areas. Looks like it will be a repeat of last year's fire season. Not fun. 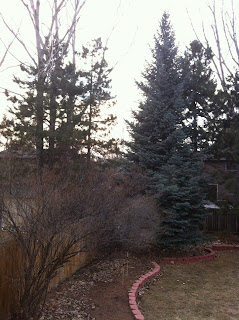 Looking out the window and seeing the hazy sky is depressing, I'm not looking forward to dealing with the smoke. Also, if the fire doesn't get controlled soon and does a lot of damage in the park, that could mean problems for the Quad Rock races that will be held May 11th this year.

My intention was not to write a depressing blogpost but this sure is going that way. I apologize. This week has been a rough one.

Recovering from Delano Park has been harder than I expected. I think it was because of the traveling and so much jammed into a short weekend. I went to work on Tuesday and I was so tired. Wednesday I was completely worthless. I had terrible brain fog, couldn't think clearly at all. I walked 5 miles on Monday, then all I did Wednesday was walk the girls for a short one, I had no energy.

Thursday I ran 8.5 miles easy and that was better after some good sleep Wednesday night. I toook long naps both Thursday and today, and those have helped. I'll try to get a few miles in over the weekend, but I'm pretty much blowing this week off. My legs are still slightly sore and tired in places, too.

Today I got word that a particularly young patient I took care of over the past 2 years, died this morning at home. I really liked him, he was so smart, talented, athletic, and had a great spirit about him. His parents are my age. I feel terrible for them. Some deaths hit you hard, and this is one of them for me. 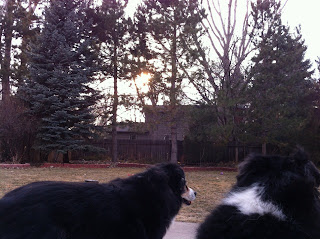 The Buffaloes went for their annual vet appointment today, both are doing well, approaching 12 years old. It's hard to believe my babies are almost 12. They've slowed down a bit, but they still have plenty of energy and Iris especially loves to run. Isabelle is not so sure about the running, but she loves to get out for a good fence fight.

Having several friends who have lost their dogs or cats lately to old age, it's a sad thought of what's ahead, but I try to focus on each day and what they can do. We try to have some Buffalo adventures every day, and those work days really put the guilt trip on me. It's beyond a blogpost to describe how much the presence of these two girls has enriched our lives. Dogs just don't live long enough. 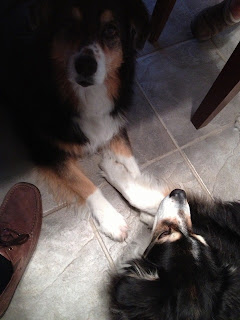 Today Iris kept the vet and his tech entertained while Isabelle trembled. The girls have such opposite personalities. Iris was obsessed with the thermometer, once the tech whipped that out, she kept her eye on it until he put it away, then she watched his hands to make sure that nasty thing wasn't coming at her again. You can't get away with anything when Iris is around.

And I finally got around to getting my labs drawn before I left for Alabama, so I got the results this week. My thyroid results are right where things should be, so I don't think the anxiety I've been experiencing is due to that. I'm sure it is those other hormones, the dang girl hormones, or lack thereof. Everything looks great except for my cholesterol, thanks to my genes I have high total cholesterol and my LDL is high, too. But my HDL so high it's off the charts.

I know I could make a few dietary modifications but not much, I really don't consume all that much crap, my one bad daily habit is having half and half in my coffee, so maybe I need to go back to Silk. And on my work days I can do better. I can probably add more beans or oatmeal to my diet, but I don't really like oatmeal and I don't really like what beans do to me all that much, either. Beano, I know.

I will not be sold on statins, I still need to go through menopause completely and see where the dust settles. As far as cardiovascular risk I don't have any other risk factors except for family history on my mom's side, the men in her family all had early heart attacks. They were also overweight sedentary smokers. I was a little surprised when my doctor suggested I might try dietary modification first but then was really sort of pushing for statins as a backup plan. That's not like her.

As an athlete, statins can cause a lot of problems with myopathies- muscle aches, muscle breakdown. Repair of muscle tissue and recovery from hard workouts are a problem, also statins have been associated with elevated blood glucose. Really, do we need any more help inducing diabetes in people?

There are other risks with statins and I'm not really convinced that any drug that is so widely marketed to the public with so-called results is good for people. By results I mean lowering actual numbers in lab tests. The numbers might be pretty, but what does it do to the person long-term and what are the realistic and practical effects of taking the drug itself on other body systems and overall health?

Also, athletes have special needs to consider when getting on a drug that can affect how they feel when training, how they perform, and whether those impacts will have a detrimental effect on quality of life for that person. For example, putting an athlete who is hypertensive on a beta blocker, that is not going to be the right drug for them.

Also, my feeling, for myself, is that I'm going to die of something. If that something is a sudden heart attack or stroke at age 80, well, good for me. I'll make damn sure they don't try to rescusitate me. If nothing else gets me by then, and lots of things could: cancer, accidents, meteor strike, gunshot, getting hit by a car while running, eaten by a gator on a run in Florida, whatever...then it will be my time to go.

Really, the way the world is going, I don't really care to live to be very old. I see what happens to people as they age and it doesn't look like fun. As long as I'm able to run and take care of myself independently, I'll stick around. Once I need to have my butt wiped, forget it. Paging Dr. Kevorkian...please, put me out of my misery and everyone else's too.

I'm hoping that this weekend will recharge my batteries. Some rain or snow would be a nice thing at this point. I might have to drive to Loveland or Windsor, depending on the wind direction, to do my runs to avoid the smoke.

Sorry to end on sort of a down note, but this is where I am today.
Posted by Alene Gone Bad at 7:07 PM

I am so bummed to hear about another fire - and so early in the year. Are they listing any causes??? You did have a whirlwind, jam-packed race weekend - you are probably a bit mentally as well as physically fatigued. I hope your body and spirits start to feel refreshed soon. It's probably the dang hormoneees, too. Yes, savor the sweet girls and their fun antics every day! Peep indulgence certainly should be on their daily menu, thoughts of canine obesification banished. :-)
Keep your chin up and hope you are able to get out for good run this weekend to help you feel alive.