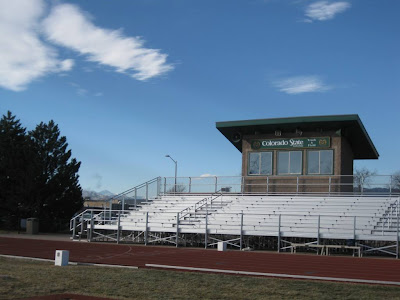 I did it. Signed up for my first ultra race since Badwater last summer, the Cornbelt 24 Hour Run in Iowa. The application is in the snail mail.

Now that I've committed to a race on the track, guess it's time to get back on a track again, something I haven't done much in the past five years. I used to love speedwork, loved running on a track. I can run around in circles forever. I must be part rat.

This morning I went over to the Colorado State University track, and there was no one there on a Friday morning in January at 9:45 am. It was 38 degrees and windy, coming from the south.

During my warmup the only people I had to share the track with were not people, they are Fort Collins' unofficial city snowbird and mascot, who are back for the winter and making their presence known on every horizontal surface, those familiar and tasty gray-green droppings that The Buffaloes love to dive for. 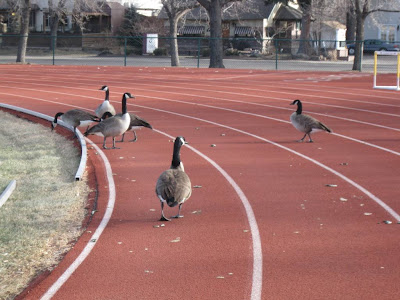 The geese certainly knew their track etiquette. I was running in lane 2 and they moved out of my way, into lane 1. I only had to say "track" once or twice. They didn't even honk or hiss at me. I wish they'd clean up after themselves, though.

I told myself I needed to do something short, fast and minimal, so I don't overdo it my first time back. I decided to stick to something more like strides, which is all I've been doing, and just a mile of them. I settled on 8 x 200 meters, with 200 meter jog in between. I ran them hard, but not all-out. I did them the same way I do my strides. As fast as I can go while staying relaxed and not losing my form.

I recovered with no problem and my splits were consistent, just slow. I'm not even hitting 6 minute pace for 200 meters. Hopefully that will change over the coming months.

Once I finished my "speed" work, I finished the rest of my miles there, and the CSU distance runners showed up for their workout. They appeared to be doing 600s. I was just doing miles to get used to the surface and curves so I moved to the outer lanes and watched them run while I was doing laps. It was fun to watch them, but I only saw one runner who really looked like she was focused on her workout and had something in her eyes that you could see she wants it. They just seemed like they were socializing more than working out. Maybe it was meant to be an easy workout. Or maybe it's just the beginning of the season.

I did my entire workout on the track, a total of 9 miles. I enjoyed it. I'll be spending a lot of time there this spring. Bring it on!
Posted by Alene Gone Bad at 12:06 PM

24 Hour run sounds too hard for me. I think I couldn't run more than maybe 1 to 2 hours.