Two Races and One Pair of Shoes 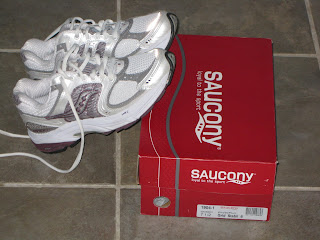 Today I gave myself three kicks in the butt I need to motivate myself for this running season. First I went over to Runner's Roost and told Steve I want to try some different shoes.

I've been running in Brooks Addictions forever but their latest version of the Addiction is creating new foot problems for me. They've changed the upper and now it rubs on the outside of my first metatarsal and is constricting my upper foot, so I'm developing a neuroma, something I've had a tendency to do if I wear shoes that are too narrow or when my feet are swelling in a long race.

Steve pulled out a pair of Saucony Grid Stabils, size 7 1/2, and told me they would be similar to the Addiction. I tried them on and as soon as I jogged through the store and out on the sidewalk, I was in love. We'll see how long they hold up. They are built almost the same as the Addiction, they are stability shoes, slightly curved last, they weigh about the same, and cost about the same. The difference I could feel immediately was that the uppers feel great on my forefoot, there are no areas of friction. They feel equally stable to the Brooks. I tried the 7 1/2s in the Addiction just to be sure that it's not simply a matter of getting 1/2 size bigger in the same shoe.

I will try a pair of the Saucony Stabils and see how it goes. My biggest complaint about the Addiction, other than the way it rubs my foot, is that it doesn't last more than about 250 miles and I have to replace them. It would be nice if I could get a few more miles out of a pair of shoes, but that's not the big issue.

I need to solve my problems with blistering and calluses if I want to run multi-day runs with a minimum of foot problems. I'll try running part of the 45K tomorrow in the Sauconys and see how it goes. 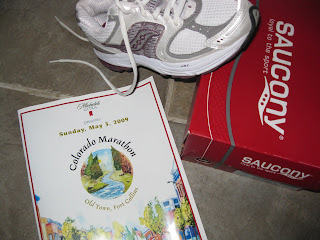 Before I left the store I made myself sign up for the Colorado Marathon since it was the first race I planned to do this year, and I was dragging my feet about signing up. It's now 8 weeks away and I need to get my butt in gear!

Then I went home and Dennis and I called our friends Kirk and Keith in Grand Junction. They are in the process of moving to Fruita and they wrote us the other day and asked if we were coming out for the Desert RATS run in Fruita in April. We usually go out there, but this year we didn't plan on it. I wasn't planning to sign up, because I didn't have a reason to...no big races on the horizon that needed a 50 mile or even 25 mile training run.

I signed up for the 25 miler. Who can argue with a weekend on the Kokopelli Trail in April? So the plan is, we will take the Buffaloes and go to Fruita and stay with Kirk and Keith and I will run the 25 miler with Keith, and maybe Dennis will sign up if he wants a challenge...Kirk is of course running the 50.

I lightened my wallet enough today. Two races and one pair of shoes. I'll think of it as a birthday present.

Tonight, we turn the clocks ahead, one less hour of sleep in the morning and darkness again! Just when I was starting to enjoy the morning light. I have to be at the cemetery at 8:00 daylight savings time. Now I have three more reasons to get my butt out there and run 45 kilometers tomorrow!
Posted by Alene Gone Bad at 3:08 PM