After the BIG BLIZZARD...Mud Season 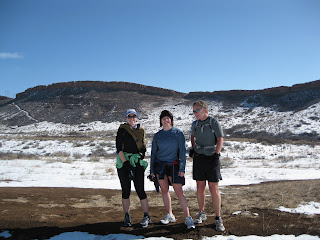 I got an email from Katy after my run on Saturday asking if I wanted to join her and Wayne, her friend from New Jersey, who was flying in for the weekend, on a trail run Sunday, and she asked if I had any suggestions for places to run.

I mentioned Coyote Ridge, but suggested we start early when the ground was still frozen, because how could you forget, the other day we had the BIG BLIZZARD of 2009...all 6 inches.

Man, you'd think people in Colorado never saw snow before. They all panicked, called off school, sent people home from work, crashed their cars. It was 6 inches. Are you all transplants from Florida? Reminds me of when it rains in Arizona, nobody knows how to drive in it. 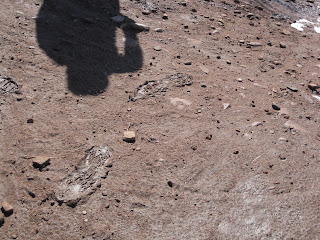 The REAL problem with a late snowfall is that it turns all the trails to mud once it melts. And with the temperatures hitting the 50s yesterday and today, it is doing just that.

I met Katy, Wayne, and his friend Marissa, also from New Jersey, at the Coyote Ridge trailhead at 8:00. We started at an easy pace and topped out on the ridge in about 30minutes. I thought it would be icy on the steps going down the other side but it looked like a torrent of dried, frozen mud after yesterday's thaw.

There was a lot of snow past the west side of Coyote Ridge. On the way out we were postholing through drifts of snow, alternating with patches of frozen mud. On the way back, it was a challenge to stay on snow and avoid the shoe-sucking mud. We started to head north on the Blue Sky trail but after about 10 minutes Wayne suggested we go south since it looked clearer. 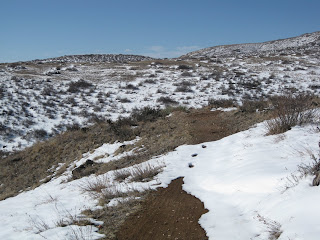 We got to the road and decided to climb the Indian Summer trail loop. Marissa is new to ultras and this was her longest run so far. She was winded but did awesome at nearly 6000 feet, having flown in from New Jersey last night! She's training for her first 50 miler in Laramie in June. 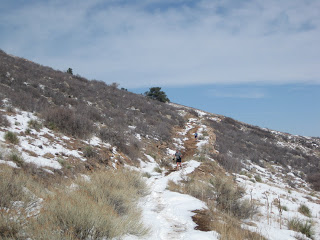 Wayne and Marissa descending the sloppy, slippery slope of mud coming down Coyote Ridge on the way back. What a nice change from the concrete wastelands of New Jersey!

It was a pleasant 3 hour run with good conversation and blowing off steam. We all felt refreshed at the end. 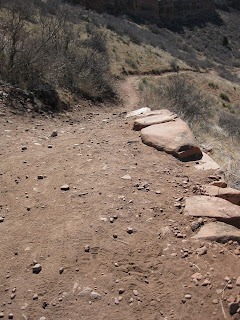 From deep dust last week on my run, to this week: 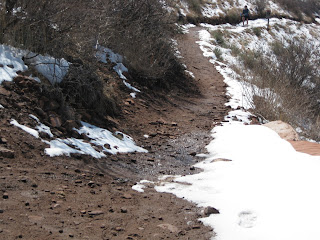 I love that pic of the guys descending the slope. Beautiful blue skies. "More mud = more fun". I like your attitude. :)

Hey Alene...this is Kyle Stone...Lori's husband (she works with you)...I think I saw you guys at the top of Coyote ridge....Sunday morning....I talked with you guys for a moment at the top of the ridge.

I started my run @ 6:15am so I could beat the looming thaw...I was trying to get in 3 hrs (about 15 miles) but the heavy snow drifts made it difficult. After rim rock I headed north on Blue Sky. After about a mile I turned around and headed south toward devils backbone. I ran the road just east of Indian Summer so I could at least run! As I headed back to Coyote ridge everything was starting to get pretty mucky...

Anyhow...I didn't get my 15 miles but I did get my 3 hours. What a beautiful morning on the trails.

Kyle,
We saw three runners, are you the one who gave us the advice about going south instead of north? If so, you were right!

Too bad I didn't know your plans, could have run with us, we did 3 hours too...