From Bomb Cyclones to White Ribbons 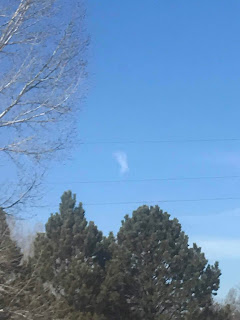 As I was headed west on my way back from my run, I saw this in the sky. Perfectly captures my thoughts today.

What does a white ribbon symbolize? It can mean peace, or nonviolence.

I'm not a fan of symbolism and especially not those multicolored ribbons that are used to signify different types of cancer. The simple explanation is, I find that symbols are too superficial and those who worship those symbols often forget what they really mean, which leads to a lot of hypocrisy, such as we have been seeing around our own flag in this country especially after September 2001 and again since the election of 2016.

I resent the use of the flag to claim that it only belongs to Christians or to white people or people of certain descendants, or those who fit into certain narrowly defined "acceptable" categories- deemed acceptable by some self-designated rulemaker of unspoken, unwritten rules to which the rest of us are not privy.

Likewise, those cancer ribbons piss me off because they symbolize "awareness", and too many people are superficially "aware" of cancer, when what they really do is wear a ribbon or slap one on their car. They know it exists, but they don't go any deeper than that to learn more. Appearance is it, they never examine what it really means to have cancer or actually support someone by doing something about it. Which is what I wrote a whole book about in 2018.

The other things I was thinking about were:

(1) the massacre in New Zealand, which, if you can forgive my snark, looks like Trump's attempt to balance the trade deficit by exporting violence, perhaps? But I truly am so disgusted by the violence and hate and bigotry and our so-called leader's response to it. Disgusting. I cannot wait until the day he is marched out of the White House in a jumpsuit to match his face.

(2) the invisibility of women, especially older ones, including in sport. But I'll do a whole separate post on that because I found an interesting blog from someone in the U.K. who also writes about this.

(3) violence in healthcare against nurses and physicians- which has become a serious and frequent problem- and how we need to change things, and

(4) yesterday I was going through my social media accounts and stumbled across a recent photo at the ACHE conference of three healthcare executives from my former place of employment which ties into all of the above points. I had to really restrain myself from posting a comment with a very snarky hashtag. 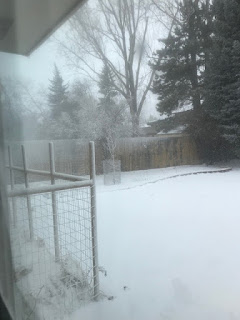 This week you probably heard the weather drama and disaster predictions about the "bomb cyclone" which was supposed to hit Colorado with a vengeance. It did, in some places, and I hear it was worse east of here, in the plains and midwest. But Fort Collins was spared- we only had about 24 hours of snowfall and maybe 8 inches total accumulation. The wind was what made it so nasty. But it wasn't as cold as it has been lately and just yesterday I saw these flowers popping out from the melting snow. 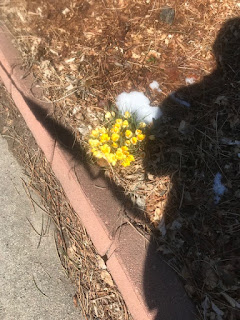 The temperatures have gotten warmer and over the past two days the sky has been blue again. It's brought me out of my crabby mood. And the appearance of the white ribbon in the sky, symbolic as it was, made me feel just a little better. 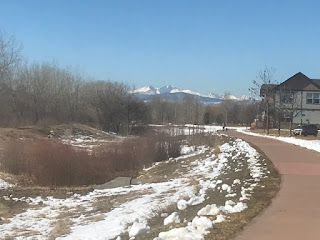 I'll be back with a post about my original idea, womens' visibility, along with the white ribbon symbol, soon. Bomb cyclone, be gone!