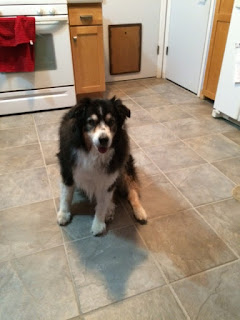 I woke up at 3:54 a.m., and couldn't go back to sleep. I decided to start working, and I had a more productive day than yesterday. I did solve a major problem that will allow me to move forward except I don't get to start that for 2 more weeks. But I did get going on some other work that I've been procrastinating on.

It was supposed to snow, heavy snow, they said. But all it did was blow the remaining leaves off the trees. It didn't even get cold enough to snow. It was 36 degrees when I woke up.

By 1:30 pm I was toast, the old brain shut down after 8 hours of working and not enough sleep. That's okay. At least I did get something done. I was being a complete wimp. The wind was howling and I'm still tired.

I decided to do something different. My legs are really tired- they burn. But I chose to not go out and run, instead, I did my workout indoors. It was short, intense, and a killer. I ran up and down the stairs in our house- two short flights- for 10 minutes. I thought I was going to die.

I call it my Stairbata workout. Like Tabata, on stairs. Short, screaming intense, but it was sort of fun. Isabelle watched me like I was out of my mind. Which I am. "I don't know what your problem is, but I'm glad it's not MY problem" is the look she gave me. 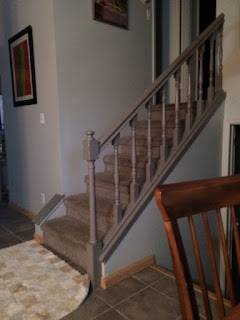 I have been so tired and I don't understand why. I survived the Stairbata workout. Hopefully I won't pay for it tomorrow.
Posted by Alene Gone Bad at 5:35 PM