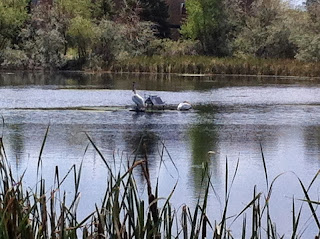 Nothing like a holiday weekend to bring out the Darwin Award candidates.

Today was my shorter run day, it was hot and I slept in late. I slept until 9:00, I don't remember the last time I did that. I guess I was catching up on lost sleep from the 4th. It was 91 degrees when I started at 11 and 95 when I finished after 1 pm. It felt hot today, I packed ice around my neck the whole time and still I was hot. 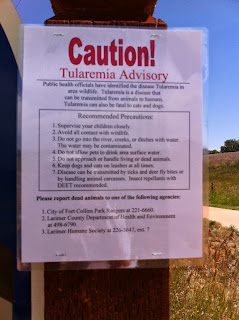 There's a tularemia outbreak and the Parks & Rec department posted signs all over the lower Power Trail warning people to keep their pets on the path, on the leash, away from dead animals, and out of ditches and other water holes that might be contaminated. 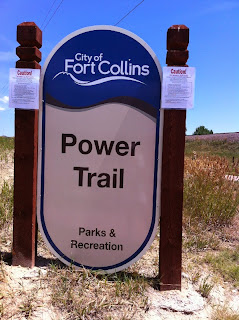 I was running south along the Power Trail and there's this one bridge near the golf course that has a ditch below it. There's water in it, and it's gated off to keep people out. There were signs posted today about tularemia everywhere. Including on the gate next to the bridge.

There was this guy with a dog, the dog was off leash, soaking wet and shaking off the water on the trail as I approached. There was a woman riding her bike northbound and I heard her say to the guy, "Did you see the signs about tularemia?" I didn't stick around to hear the end of that conversation. I'm sure he saw the signs. He's an idiot, on two counts: for exposing his dog to tularemia, and for having the dog out there when it's 95 degrees.

Things were quieter last night but there were still some people shooting off leftover fireworks on nearby streets. I woke up hot flashing and was awake for a couple of hours, but went back to sleep.

Tomorrow it's back to reality. Long holiday week and weekend are over, gotta get back on track and keep the momentum going. And it will be my rest week from running. I'll get on the bike and give my legs a break, and give the hip flexor a chance to heal. This month is going to fly by, I can tell already.

We did have fun for Isabelle's birthday. The apple carrot peanut butter pupcakes were a hit with the girls, and Iris sang happy birthday to her sister.