Got the Belt Buckle This Time! 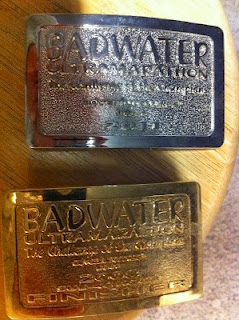 As every ultrarunner knows, the belt buckle for finishing is one of those perks. It's never about the buckle, it's about the satisfaction of finishing and succeeding at what you set out to do. There's a lot that goes into that belt buckle, not just in the race itself, but in all the preparation, dedication, discipline, focus, and pure enjoyment along the way to holding one of these in your sweaty, sticky palms after being up all night and into the next day.

About a month and a half ago I tried to do something and failed. I tried to quit my job but somehow came away with a DNF, did not finish, I didn't quite accomplish the task. Somehow I ended up taking on a relief position. Well that was a mistake. I should have gone with my gut the first time. I'm paying for it by having to do another 4 weeks of work, but today, I finally got the buckle. I turned in my letter of resignation and in 30 days I'll be gone for good.

I am tired of spending maybe four times more time in front of a computer than doing actual face-to-face, hands-on nursing care with the human beings who come in. I'm tired of watching an endless parade of nurses marching out the doors, I'm tired of them eating their young, and not-so-young. I'm tired of watching nurses (mostly women nurses, unfortunately) backstab each other, playing the dead even rule, attacking those who shine in some way, are recognized, or have skills or talents that make them stand out. I'm tired of those evil little passive aggressive games like in junior high. I hated every minute of junior high. It sucked. It was traumatizing. I don't care to relive it.

I'm tired of executives and administrators who live in their own little self-contained world and don't speak to nurses, and don't include us in making any decisions about how things are implemented that will affect patient care. I'm tired of watching the Peter Principle in action and people trying desperately, and sometimes viciously, to hide their incompetence from anyone who might question or threaten their qualifications to be in their comfortable positions. I'm tired of knowing about the well-padded lives these people live as they play games with the bone-on-bone lives of those who do physically and emotionally draining work for long hours to directly support the needs of human beings who are sick, scared, and vulnerable.

I'm tired of the people who talk out one side of their mouth about cutting budgets, staffing, and unnecessary spending, then out the other side dictate decisions that enrich the executive class like huge extravagant severance packages, or slashing staffing based on the bean counters of some expensive consulting firms. Adopting their suggestions that don't have any basis in the reality of what goes on in the patient care areas.

I'm tired of watching them backpedal and pull themselves back from dangling over the edge of a cliff because they put too much faith in those bean counters and now, they have to hire expensive travel nurses because they got rid of too many of their staff. Putting tons of money into building up their public image while providing less care for the real people who use the services, because they cut staffing.

I'm tired of hearing people talk about concepts like leadership and accountability when they couldn't lead their way out of a cardboard box, or account for which box they'd been in. And the list goes on...

What's hardest for me? I wish it had been more satisfying, more understanding, more caring, more empathetic, more supportive among nurses themselves. It creates toxic work environments that leach waste into everyone and invade the deepest crevices of their lives in every possible way, on their days off, during their sleep hours, into their family lives, and more.

Oh yeah, and I made quite an investment of my time, almost the last 10 years of my life have been devoted to this. I went back to school at 41 and got my first nursing job in 2006, and almost exactly seven years to the day after starting that, I am done. That's all it took. Seven years to burnout.

Now I'm trying to salvage my health, aware of my increasing age, knowing what stress can do, in the back of my mind knowing my family history of breast cancer and leukemia, and who knows what else, hoping that I haven't done irreversible damage to my body, and lately my stomach feels like it's getting a hole in it. And trying to keep track of my own mental health, too, making sure I'm not falling into a pit of depression.

The main reason I'm leaving corporate nursing is simply stated by the bumpersticker I happened to see on this car in front me as I drove over to the hospital to deliver my letter of resignation to my boss this morning. 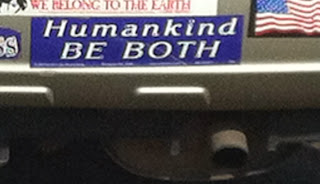 There is a great need for more kindness. In life in general, in workplaces everywhere, yes, but nursing could use an infusion of this stuff, at least twice a day. Corporations might have certain rights as human beings, but they are not human, and certainly not humane. The larger they get, the further removed they are from being able to recognize the real needs of people who are served by them, or work for them.

So it's time to heal again. This nurse is healing herself. I'm healing from health care.

And more fall pictures. This year has been so colorful. Maybe it just looks that way against the dull backdrop of my mental state lately, but I know it's real. This is the world I'm returning to. 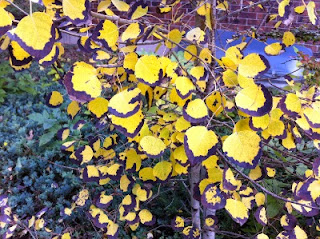 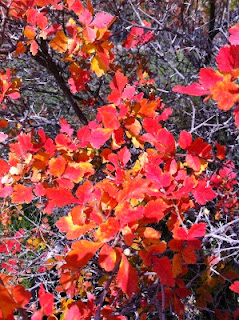 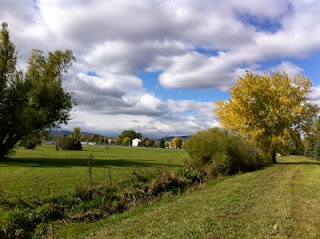 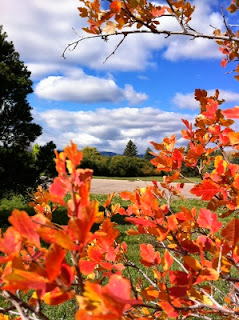 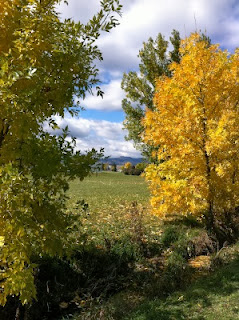 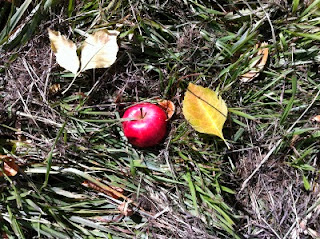 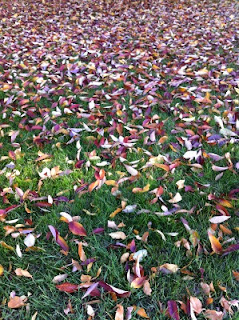 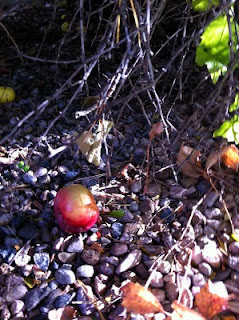 Alene...I can relate. At an age of 51 I retired from being an Air Traffic Controller. Mandatory retirement age is 56. I didn't feel like a burned out ATC at the time, but now 4 years later when I look back, I can see I was on the road to being a stressed out ATC. I think when you look back you also will be glad you made this life decision.

Thanks for the comment Mike and for sharing your retrospective view. I agree with you that this was a good decision. I'm looking forward to clearing the fog and being able to focus with clarity and better health on my next endeavor, starting a health coaching business that will allow me to take the best parts of nursing and focus on those without the clutter and toxicity of the corporate world.

Yay Alene! Congrats on getting out of the corporate world. One less place for SpongeBob to be stalking you now. ;)

Thanks Felix! I get to stay home with Sponge Bob now.

Congratulations Alene! You've made a courageous step forward to being the real you.
I could feel the emotion in your blog and how life draining that must have been for you.
Please let me know if I can be of help in any way.
--Doug

I understand your position. I left clinical nursing 3 years ago. All the things you talked about, backstabbing, and the junior high like atmosphere ring true for me. I work in Informatics now and I try to stay away from the drama that happens in any office. I lasted only 5 years on the floor and I am all done. The last year was by far the worst.
The scars are still fresh in my mind. And going back is something I do not think I can ever do. Like you, I run too. And often when I am in the middle of a long run, my mind wanders back to that time. Pounding the pavement is the best therapy I can ever do. ;)
Good Luck to you in your new adventure!!!

Doug, thanks for your concern. I am glad I have friends like you and Connie who are caring human beings, who are there for me in so many ways. It's been hard going through this but you definitely find out who your real friends are!

Grassisalwaysgreener, I'm sorry you had to go through the misery too. I don't think I could have made it through without running! What's sad is that there are so many nurses who experience this and leave, and they are usually the better nurses because of their sensitivity. I got thrown under the bus and stabbed in the back by my own peers and people above me, because I'm outspoken and honest about my feelings, among other things that are threatening to them. But it's almost over and I'll be glad when I make my exit from the gates of hell!