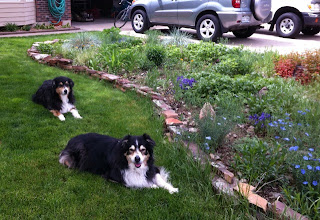 We're finally getting some beautiful spring weather. I'm hoping to get a few days to enjoy it here, before it goes into an all-out heat wave.

I wrapped up last week with an 8 mile elephant legs run followed by a 29 mile bike ride with Troy in the afternoon. We had a killer cross wind on the ride, but we made good time for the distance. My legs were burning as I fought the wind.

I got 40 miles of running in for the week, all at a painfully slow pace. Then I started my work week, which consists of two 8 hour days of computer training, then a few days off, followed by two 12 hour shifts on the weekend. So I'm headed into the days off segment now. The reason why it's an Epic hangover is that the name of the computer system we are training for is Epic. All of our documentation will be in this Epic system, which actually is not so bad, once you get used to it...

but sitting on my butt for two days in a classroom in front of a computer was about the most exhausting thing I can imagine. I got home both days after class and all I could do was take a two hour nap. I was zonked. It sucked the life out of me.

I was so pathetically wimpy that I didn't run on the computer training days, even though the weather was perfect, cloudy one day, then nice and cool and breezy with sunshine. I figured since I have been feeling so sluggish, another two days off won't hurt me. If anything it will give me more rest if that's what I need, and if not, it will just make me more sluggish, which can only be overcome by running, which I will do for these next 3 days before I go back to work again.

And then I have three weeks of a more normal schedule, which will give me a chance to get back into my running routine. Elephant legs B-GON!

I might even hit the track this week on one of the three days, just to do some 200s or something to get a little turnover without having a serious speed workout. That might be what I really need.

My all-out frustration with things going on in healthcare and in the nursing profession in general have led me to an existential crisis of sorts regarding my future in healthcare, but more specifically, nursing. It makes me sad that I love what I do on a daily basis in my job, really, even when it makes me crazy and exhausted and burned out because of the WAY WE WORK, not because of the THINGS WE DO.

Just the past two days of being in computer training with a small group of the nurses I work with most often, reminds me again that we're all dealing with the same set of circumstances, and we feel the same pressure, and have the same thoughts, questions, frustrations, and fears. And it's not just us. It's EVERYWHERE. I hear the same things from nurses all over the country, and out of the U.S. too. Despite the numbers, something like 3 million registered nurses in the U.S., we have not been able to advocate for changes that would improve not only patient outcomes, but our own working conditions and environments.

I've been torn between a few things, I have so much to say on the topic that it's enough for another blog, easily, but I don't want to start another blog. It would take too much time and energy to commit to another regular blog when I need to start channeling the energy of frustration into something constructive.

Writing, for me, is so therapeutic, and I have a lot to say. I need a lot of therapy! My friend Geri Kilgariff has been after me for years to write a book, so has Dennis, and I think I'm finally at the point where I have accumulated enough material that I could discipline myself into refining and shaping it into something other than a blog. So that's one project I need to get going on. I might have close to 1000 pages of written material on nursing alone over the past 8 years since I started nursing school.

The other project is to figure out a way to move myself forward despite the lack of anything but lateral opportunities in nursing, unless I wanted to become a nurse practitioner, which I don't, or go into management, which is about as appealing as dog poop. Actually I think dog poop is much more appealing and I would rather roll in it than go into management of anything.

So I am in the process of exploring how to expand on my current skills, knowledge, and interests to give me some opportunities while the profession of nursing stays inert and stagnant, choking as healthcare reform swallows it up and the vicious cycle begins again. Between my two projects, maybe I can help myself and do something to impact nursing in a positive way. My snarky side wants to say I could do something to disimpact nursing, which is really part of nursing's problem.

So, that said, I'm ready to get on with it. I've been a slacker for almost 5 weeks. Tomorrow, no excuses, it's back to running, and a more structured schedule. I have the Casper Marathon coming up in 11 days!

First of all, is that photo with the girls and your flower garden current???!!! If so, you are WAY ahead of us - the garden (and girls) looks beautiful - I am jealous!!!
Secondly, PLEASE don't leave nursing world - we need good people like you in the medical profession. As with everything, there is too much red tape and no common sense. And lastly, here's hoping your elephant legs take a leave-of-absence right quick and in a hurry!!! :-)

Kathleen, yes that was taken this past Sunday. The garden is improving every day, I will be posting pictures as it blooms. I am trying to figure out a way to stay in nursing without being stuck in nursing. Don't know if that makes sense, but I am working a little bit every day on my plan.

Yes, I'd like to get rid of the elephant legs. Enjoy this beautiful weather!