Keeping Me On My Toes 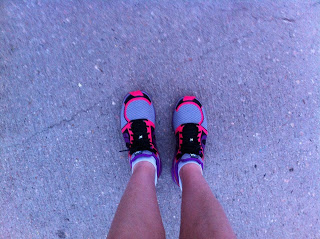 I went for a bike ride with Connie, one of my coworkers, on Monday, down to Boyd Lake and into Loveland and back. It was a warm morning, the day ended up being hot, in the 80s by afternoon. First thing in the morning I took Iris for a walk and found myself running, but it was already really warm and she couldn't go very far. Looks like I'll have to start taking the girls before the sun comes up. The sprinkler stops won't be as frequent given our watering restrictions. I might have to hose the girls down before we leave the house.

I wonder if not getting as many miles as my body was capable of in the race has made me less tired. It's hard to tell because sometimes you think you feel good soon after a race and then you can overdo it, and set yourself back. I've learned to be on the conservative side of this. Three weeks minimum. If I'm crawling out of my skin, that's okay. Speaking of rest, and patience, the universe sometimes delivers these messages in cruel ways.

I was supposed to get together this week with another Connie, my friend from the running club, to have coffee and just catch up. She's been recovering from knee surgery and hasn't really gotten back to running. I thought I'd hear from her during the day on Sunday and never did. Then Monday morning I was on Facebook and saw a message from her daughter, saying Connie had been in a bike accident and had surgery Sunday night for a hip fracture and other injuries.

Fortunately her daughter was able to get to the hospital and let them know before the surgery that Connie is an athlete, which changed the way the surgery was done, and was there to advocate for her afterwards, reminding the nurses and other staff that her mom is not an old lady, that she should be treated as the younger, stronger, healthier person she is compared to other people her age.

I got in touch with her daughter Monday morning and later in the day went over to the hospital to see her. Connie's husband was there, he'd been out of town when the accident happened, but flew back early in the morning. Connie was groggy from the pain medications and finally they had her pain under control so she was able to sleep. She is stable and recovering, but she's at the beginning of a long road. She wasn't hit by a car, she actually tipped over on her bike while trying to get a water bottle out of the cage, and fell hard on the asphalt.

These things can happen at any time, to any of us. It's important to remember every day that we are so lucky to have our health and fitness and be able to do the things we do, because it's not guaranteed. I'm so glad Connie wasn't hurt worse, I'm thankful for helmets, and that her injuries were things that can be fixed and rehabbed, so she will be able to resume doing the things she loves.

The other lesson that comes out of this is rest. She is going to have to take a long rest, she'll be working hard with physical therapy and getting her strength back, but it's going to have to be in moderation so she heals properly. It will take a lot of patience and mental discipline, which is hard for some runners to do. Disciplining yourself to hold back at times, and knowing when it's okay to work harder, is an art in itself.

It's a reminder that after a hard racing season, or any time when your body is telling you, "Enough!" to listen to the clues it gives you. Sometimes it's tempting to go do those extra miles or extra cross-training, but it takes self-discipline to know that at the most it won't make any difference, and might actually do more harm than good. 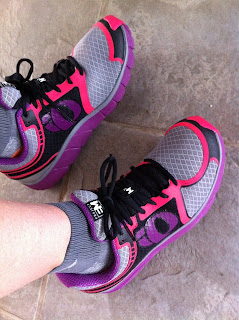 When I arrived home yesterday afternoon from visiting Connie, there was a package on my doorstep from Pearl Izumi. The M3s. They are road training shoes, with midfoot stability. My wide foot on the left always gives me problems, there are few shoes with toe boxes wide enough or without material that doesn't hit me in a way that compresses my surgically altered foot. They feel good, very comfortable and well-cushioned. 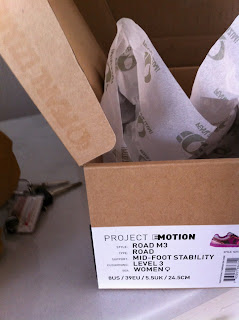 The weather is about to turn back toward winter, in time for May 1st. That should be expected by now. Eighty-three degrees yesterday, snow tonight. I can see green leaves on the lilac bushes out my window. Last year at this time they were already past full bloom and fading. The leaves have not popped out on the cottonwood trees, but they will any day.

I see there is a 24 hour event in Boulder on 10/12. At Boulder reservoir. Do you know if that is a good event?

Ultra Monk, Yes, that is a great event! I ran it twice, in 2007 and 2008. I always miss it since I started my new job as it falls on my work weekend each year. But I highly recommend it.