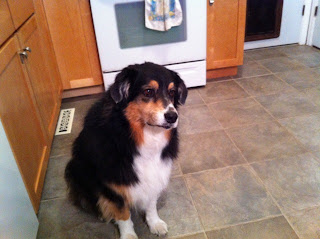 This is the curl lip. Anyone familiar with Australian Shepherds has seen it. It means, "I'm watching you, and I can't figure out what your problem is."

The problem, in this case, is that I was preparing to eat people food in front of her. I was so hungry at the end of my run tonight! 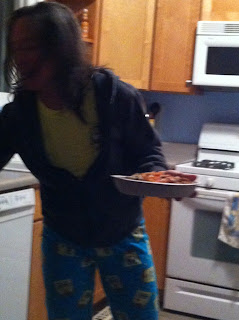 Today I did an easy six mile run in the morning, after a trip to King Soopers to get dog food, dog treats, and a few people things. I wanted to beat the madness of the next few days. I hate grocery shopping around the holidays.

Food is such an obsession around the holidays, worse than it usually is, there's so much of it, and it's so bad. It's a giant obesification ritual. Just being in the grocery store makes you want to go on a hunger strike. I wish people would find something else to do with themselves than reach for food, put it in their mouth, gulp it down, and repeat until comatose.

Back to my run, I did some strides this morning, for the first time since before my race in Oklahoma. Last week I wanted to do them but my mind couldn't force my body to do any. But today, it wasn't too bad. I managed to get the kinks out, I felt a little rusty at first, but I think my muscles are starting to remember how to do it.

Then tonight, I ran with Wheaties Boy, the tempo run. I didn't expect much, but I felt surprisingly good and we ended up with 11.2 miles at 8:19 per mile average pace. Not bad. It's my first decent run since the race. I felt good and it didn't feel like that hard of an effort. I had no idea we were running that pace.

Tomorrow will be an easy day, maybe a few strides, but I'll be running the 4 mile turkey trot on Thursday morning before work. 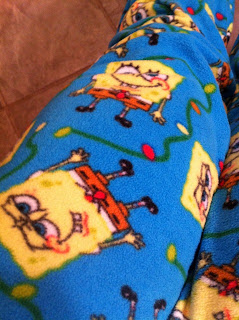 Tonight, I put my squarepants on, and I'm relaxing, with a nice endorphin high, hanging with the girls. It feels good to run like a runner again. The only problem with running races, is that you have to recover. Three weeks felt like forever! 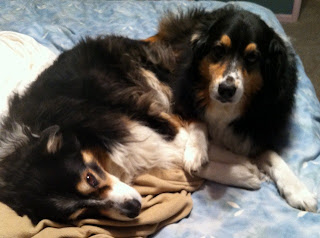