So, this happened last Friday.

As usual, trying to find ways to occupy my time and prepare for upcoming events always takes a bit of creative genius. Felix and I decided to do this again, even after last year's not so great event. I think we were in Spanish conversation group when we decided to repeat it.

Last year was okay, but we did 50 miles and it was hot and I remember feeling like I couldn't get my head in the right place all day to really enjoy it. 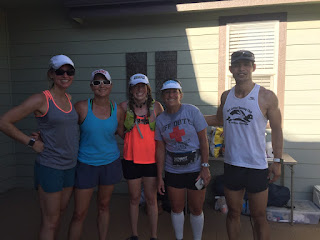 This year was completely different. Our friends Mel, Brooke, and Rachel came out to do a few miles, and Crisann generously offered her front porch for an aid station area, and between Felix and Crisann's house- they are be neighbors-  we had bathrooms and refrigerators available as needed.

My intention was to stay out for the entire 100km, as long as it took me. I wanted to make myself run at least 6 hours of it, as I am building up my running time again after several years of doing way too much walking. Other than that, I just wanted to take it easy and have fun. It looked like it would be hot again, so I had plenty of ice and cold drinks in my coolers.

Crisann brought bagels for everyone who wanted them, and we set up my table on her porch with potato chips and other crap food, and we were set. Her house is centrally located on the course, and Felix's is right around the corner. 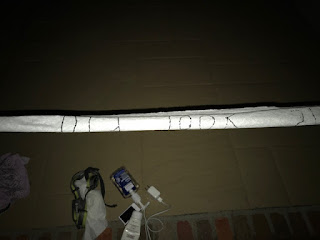 I was the lone hard core early starter. I got to Crisann's at about 3:50 am, set up my stuff, and was ready to start at precisely 4 am. I strung a section of toilet paper labeled "DIY 100K Start" in Sharpie across the entrance to her porch in the dark, and took off. It was still dark but soon the sun began to rise over I-25 and the Budweiser plant, and at some point Mel drove up and was ready to start by maybe 5 am, and we ran about 3 miles together before taking off on our own loops.

There are maybe 4 to 6 different loops that anyone can run on this course to keep it a little more interesting. A few have hills, but they are pretty tame, except after you do them ten or fifteen times you start to recognize them as hills. I keep track of my distance using paper, pen, and calculator, and GPS is my backup system. 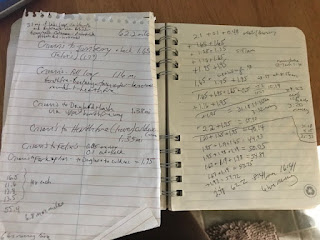 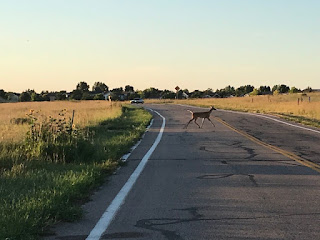 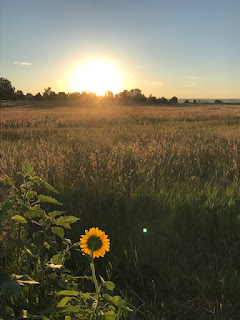 The morning got progressively hotter and by 9 am I wanted ice on  my neck. That lasted until about 1 pm when it clouded up enough to seem less intense, and even cooled down a little. Instead of 93 degrees as forecast, them temperature hit maybe 88 or 89 and then cooled off into the low to mid 80s with cloud cover. That saved my butt.

I felt good all day. I distributed the running well over the entire time I was out there, and didn't walk super hard when I was walking.I didn't even use music until late in the afternoon- for the last 3 or 4 hours. Most of the day I ran alone, with occasional loops with Mel or Felix.

Mel originally wanted to do her first ultra, so she set her goal as 26.3 miles, but she felt so good that she ended up doing a full 50K. Her first ultra at the DIY. 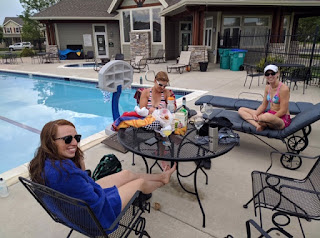 After that, she went over to the pool and hung out with Felix, Brooke, and Rachel. Brooke did about 16 miles but she was running a half marathon the next day, and Rachel did her longest run ever, I think that's what I heard from Felix. At the pool they were drinking mimosas and who knows what else... 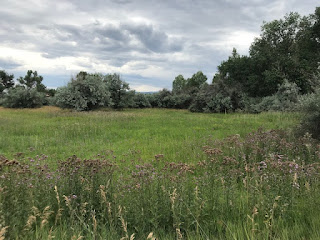 While they were out there I stopped by Felix's for an ice cream sandwich. The afternoon was pleasant and I had few issues- a tiny bit of chafing and I changed my socks once- but other than that, it was all easy.

Felix hung out at the pool until at least 3:00 and then he was way behind- but he wanted to do 100K and got back out there. I kept teasing him about his harem. As it turned out, he did finish around 12:48 am on Saturday- about 4 hours after I did- and I was long gone and asleep at home by that time. 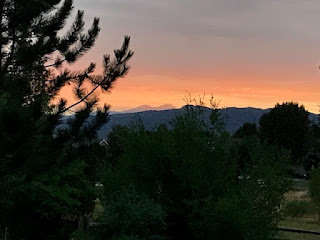 The sunset was a bonus with the cloud cover. I finished my 6 hours of running by 6 pm and finished the entire distance at 8:41 pm. Crisann helped me put my stuff back into my car and I went home.

Not super exciting, but it served its purpose and I felt good running. I was able to still run the uphill sections even toward the end. I haven't felt that good running in a long time. It gives me hope that I might actually become a runner again. Just really looking forward to Across the Years this time.


Not much else to say-it was a good run, 62.2 miles in 16 hours and 41 minutes, nothing to get too excited about, but a decent training run on my feet and ready to take it up a notch as I go into the fall. Kind of a backward approach to marathon training. At least now I know I can run long enough to run a whole marathon.
Posted by Alene Gone Bad at 5:05 PM

Great job! So much fun being out there with you!