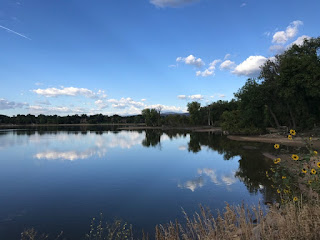 I needed to get some miles in this week, but I didn't have a lot of time to plan something. Decided I wanted to get a long run in, but it was easier to split it up into two days. I settled on 50 miles broken up into 30 and 20. That way I didn't have to rest so much or plan- both days could be low key, just a little longer than my normal run. 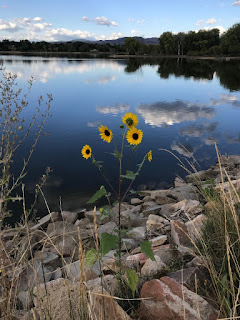 I woke up super early for some reason on Wednesday and got out the door by 4:45 am to start my 30 miles. I ran for about three hours and watched the sun rise, then came back to the house, got Velcro and Gypsy, and took them for about an hour run, then brought them home so I could finish my miles. All went well, I felt good, and kept a decent pace all morning.

I ran into two people I know at the lake, one is a runner I see often over there since he lives by the lake, and the other was a surgeon who is now retired, but I used to work with him when I worked in ICU. We stopped and talked briefly looking at the lake. He said something about next time there being snow. I'm not quite ready for that, but it will happen soon enough. It sort of feels like an early fall, it's been cool in the mornings and the trees seem to be changing colors earlier than usual. The sky was so clear today, I could see the Indian Peaks south of Longs Peak, which I haven't been able to see all summer, with all the smoke from the fires everywhere. 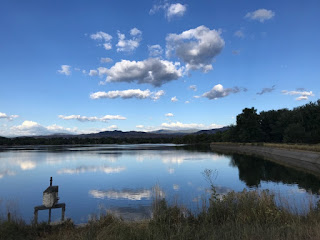 I got done with the run feeling like it was no different than my usual 10 to 12 miles, got some things done in the afternoon, pulled 40 pounds of grapes from our vines off the stems, ate dinner and went to bed. 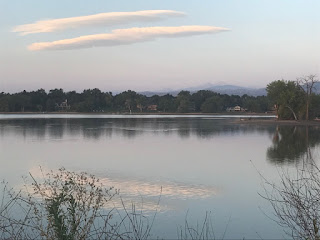 This morning I woke up later and took the girls for the first 6 miles of my 20. As we rounded the lake I saw two people walking, a man and a woman, and the man looked somewhat familiar. I saw him look in my direction too, but we ran by and he didn't say anything. I wracked my brain to try to figure out who he was and how I knew him, then it hit me like a lightning bolt- he worked at the hospital too. I remember talking with him as he was often working part of his day in the ICU. 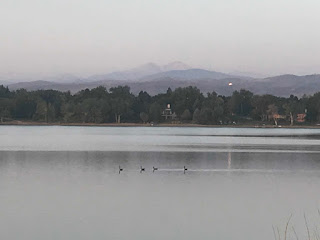 As we turned around to run back toward the lake, they had turned around and were heading toward us. This time we looked at each other and stopped- and yes, it was him. We hugged each other and he introduced me to his friend, who also worked at the hospital. Now they are both retired. He introduced me as "used to be an oncology nurse" and I told him that I still am, briefly told him what I'd been doing since I left the hospital. He's been gone from there about as long as I have been. He said he was glad to see me and also said he's always happy to see people who thrive after leaving that place, and his friend nodded. He said he was really glad to leave such a toxic work environment. 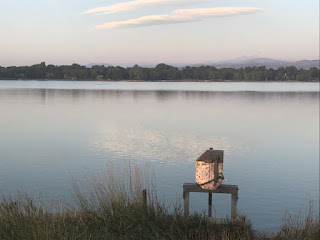 It's funny because now I clearly remember the day I was so pissed off at my boss, who had terrible management skills, and I was ready to tell her to shove it up her ass. I left the hospital crying that day and that night I wrote my letter of resignation. As I was leaving work, I ran into this same person I saw at the lake today, and he gave me a hug then and wished me well. He knew at the time that there was so much bullshit going on in the hospital. I'm glad he got out, too. 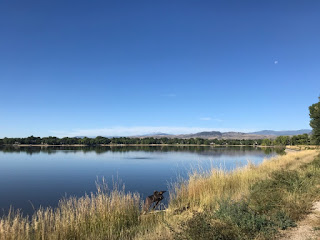 I brought the girls back to the house and went out again, first stopping at the donut shop because I was hungry and it was conveniently located. I didn't plan for much running food, so I ate what was easy to find. After that I went south of where I usually run, and made a stop about three miles from home for an ice cream sandwich and cold water, as it was getting hot and my water bottle were getting warm. I felt fine, like I did any old run. I can definitely feel my fitness and endurance have improved since the beginning of the year. 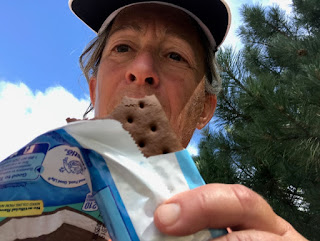 After my treat, I finished my 20 miles, and spent the afternoon making tomato bisque soup from our tomatoes and putting the de-stemmed grapes into plastic bags to freeze so I can make jam in a few weeks when I have time. I'll be doing a little traveling for a while, and then There Goes the Sun 12 hour run is on the day of the Fall Equinox. After that I'll have 3 more months to get ready for Across the Years!
Posted by Alene Gone Bad at 5:50 PM