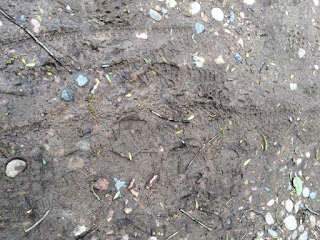 Mud season has arrived in all its glory. I finally got out for a 20 miler this morning, just in time to beat the brief hailstorm that passed overhead just as I was getting out of the car to go in the house after my run.

Our weather continues to be unusually wet and cool. Every day we've had at least a little rain, many days it's been dumping. The Poudre River is high and if we get any warm weather soon it might overflow its banks onto the bike path. Longs Peak is solid white with snow from all the moisture we've had.

I've been struggling with the consistency but it seems like every time I go out for something long, it doesn't tire me out. Today I ran for about two hours and forty minutes of my 20 miles, walking the rest of the distance. I got a good 2600 feet each of climb and descent on the Horsetooth hills. I did two Maniacs all the way to the bottom and three As. By the end of the run I still didn't feel like it was a legitimate workout, it felt too easy. Maybe just too short.

I was hoping for some heat, but I woke up at 3:30 am and couldn't go back to sleep, so I did some work for a while then got up to the reservoir by 7 am to start running. That turned out perfect because the rain didn't wait a minute past 11 am to start. 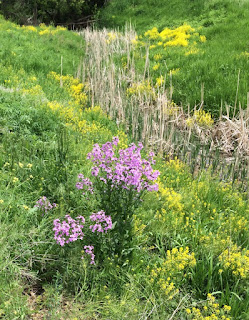 The trails in the foothills have been closed due to the mud, and as I sit here typing it is sunny but tiny hailstones are pounding on the roof of the woman cave. I hope it doesn't destroy my tomatoes, spinach, kale and lettuce that are all doing so well. Today the wet weather lasts about 30 seconds and then it gets sunny and dries up again. Saves on watering.

My running plans are still the same, planning on crewing Bob on his return trip at Badwater in early August, and no racing for me. I am not even tempted by anything right now. I would like to get out and do a long run of 50 miles or so in the month of June. Just to do it, and remind my legs again.

I was hoping to do a long run, maybe even the donut run, last weekend, but then we had this freak shooting in Windsor. They haven't caught the person who shot a guy on his bike twice and killed him! There's also someone shooting at cars on I-25 between here and Windsor. I don't know if they are related, but until they solve it, I am not running between here and Windsor, or anywhere around Windsor or I-25. Forget the donuts.

Maybe I will do a donut to brewery run instead. That should keep me safely inside Fort Collins. Call it the Drunken Dunkin Donut Dash or something? Gotta make it entertaining.

Not much news around here. The post office still has not fixed the mailbox and I've been told anywhere from a month to three months before the mailbox is replaced. Great. I just love being a regular at the post office.

And speaking of slinging mud, I wrote an opinion piece in the local paper, on Nurses' Week, and then some dude responded by slinging mud at me. Claiming to be a nurse, but he's an administrator with a nursing degree. A dinosaur. And he showed exactly why I wrote the opinion piece in the first place, and why I started the website Fighting Dinosaurs too. A perfect example of how nurses eat their young. So my friend Melissa in Florida wrote a response to HIM. I did write my own response to him here, but I doubt if he'll ever read it.

He really wasn't worth the time but I felt like mansplaining it back to him, more for the benefit of people who don't quite understand the BS that nurses deal with all the time. This was a textbook example of horizontal violence. Actually I prefer to call it vertical violence because it rains down on nurses' heads from above. (Sort of like the old, crude but accurate saying, "they're pissing on my head and telling me it's raining") 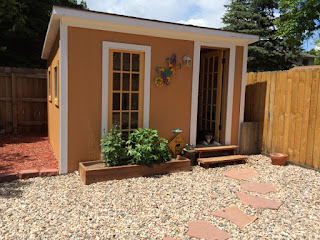 It stopped hailing and raining. Now it's sunny. Iris is watching the garden grow. It's time for a nap.
Posted by Alene Gone Bad at 2:21 PM

I think that nothing in the universe sounds better than a donut to brewery run.

I'll try, Heather. You should come join us in Colorado. It might even rain. Keep chasing that fast girl of yours...