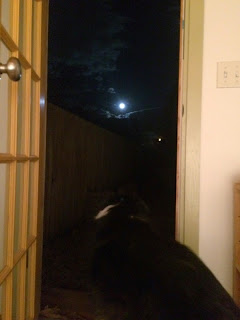 We certainly shoot for the moon around here in Fort Collins. Sometimes we go over the moon and miss our target.

What a week it's been in northern Colorado. The arrogance of power, profit, and politics, pomposity on steroids.

We've been so juiced up in the executive departments that we don't even know where we started, and we sure don't know how to stop.

1. CSU football coach Jim McElwain is leaving to coach University of Florida. (We suspected it all along despite the adamant public denial from everyone at CSU). 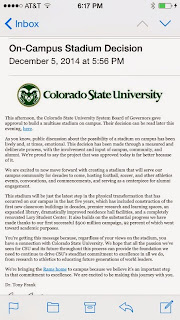 2. Tony Frank, president of CSU, saw his wet dreams come true, he got approval to build his on-campus stadium.


3. To keep up with the newbies across the street, University of Colorado Health is proposing to build yet another emergency department on Harmony Road, just down the street from the new emergency department going in at the new Banner Health facility that will open this spring. That's on top of the emergency room renovation at Poudre Valley Hospital.

The other night I was at an event with some people in the community who were familiar with the goings-on in the competing health systems in town. And they asked, "I see they're building a new emergency room. Why did it take so long to raise money to build the cancer center?"

I don't think they'll be begging the community with emotional appeals to support them in this capital expenditure.

Why are we paying a football coach a huge sum of money- his original buyout was $7.5 million dollars, which I hear has been reduced, to the tune of $5 million. Couldn't they put that toward the multimillion dollar cost of the stadium? We know they won't put it toward academics.

Why do we have three emergency departments within 4 miles of each other in a city of 150,000, two of which belong to the same hospital system? Wasn't Obamacare supposed to reduce the need for emergency services because people would have health insurance and get preventive care so they didn't end up in the ER? (Hint: follow the money)

Meanwhile, this area is in desperate need of a mental health facility. Hello?

Ask executives at any of these institutions and they will issue the same platitudes and excuses. But these are both really unnecessary expenditures at a time when we ought to re-think our original purpose, and whether it truly benefits the community, or just a few. Those who are so hypersensitive to criticism might want to explain themselves to the public, who are asking good questions.

What are we doing in this country? Does this make any sense? Do we need another college football stadium and hospital emergency department? Haven't the costs of higher education and health care already gone over the moon?

Where are the grownups? These children who are too big for their business suits need a time-out.
Posted by Alene Gone Bad at 6:54 PM