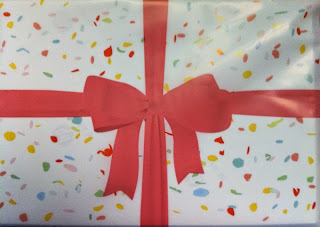 The past few weeks have been a bit frustrating running-wise, and it was because I didn't know when my legs would start to respond to training after Cornbelt. I didn't rest a lot, but I did take it easy for a few weeks and didn't start serious workouts until June. The past three weeks I've been tired and my legs feel sluggish.

After yesterday's improvement in the speedwork, I decided it was time to get the first long run in today instead of waiting until Sunday. I planned a challenging, hilly 30-ish mile course up at Horsetooth on the hills. I thought it might be a little quieter up there since today is the big Brewfest downtown, but I was wrong. WAY wrong. There was a bike race, and then I think there was the MS 150 ride, but I'm not totally sure who the different groups of cyclists were. All I know is that I was outnumbered easily by several hundred cyclists. 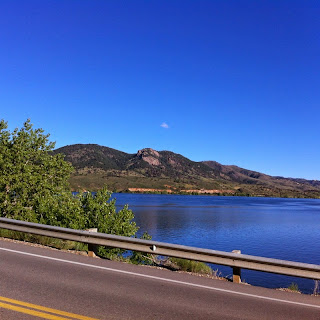 It was a clear morning, cool enough because there was a breeze, but I could feel that the cool air wouldn't last long. I got up to Rotary Park and took off southbound. 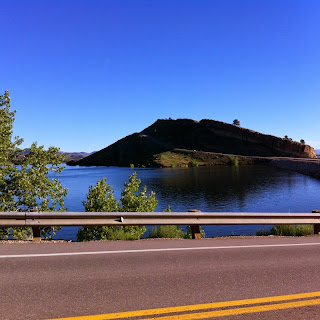 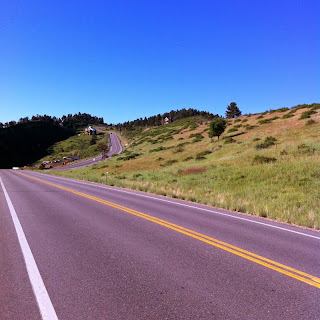 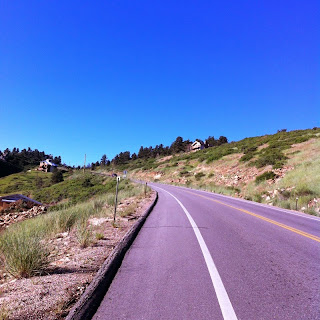 I didn't realize there was any event going on until I got to the bottom of Maniac Hill by Spring Canyon Dam, I saw people along the side of the road, lots of signs, and sheriffs cars and an ambulance, but the people in uniform were just standing around. I continued down the hill to my turnaround point, where the road flattens out past the curves. 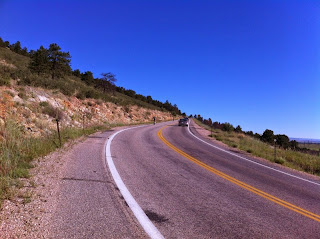 I stayed on the shoulder and only had to jump off into the gravel a few times. Most of the cyclists, even in the race, were nice. No one gave me any attitude. 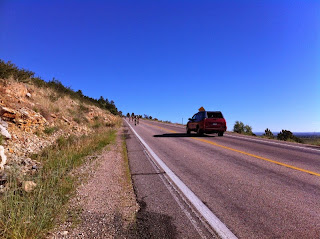 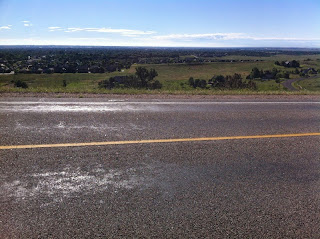 Coming down the hill the first time I saw this snake wafer. Just left of center, on the far side of the road in the shoulder. Triangular head, a rattler. Fresh out of Cheez Whiz! On the way back up I took a picture across the road. It was a huge rattlesnake. Was. Probably a four footer. 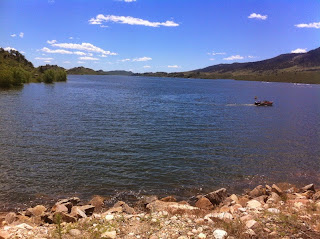 I continued back up the road over Maniac to Rotary Park, drank some and refreshed my bottles with ice and water, then decided to do the Maniac section again and get it over with. It's the steeper of the two out and backs on the course.

I ran even splits for the two out and back sections, and then I went north for the Horsetooth Dam and Lory State Park turnoff section. Before I started the northbound stretch, I filled my bandana with ice and tied it around my neck. It was getting hot. I ran across Horsetooth Dam on my way back up both times, to break up the intense, steep uphill. I also ran even splits for the two north out and backs. I felt strong the whole way. I didn't push the pace but I ran steady, took no walking breaks, and just ran what felt comfortable. 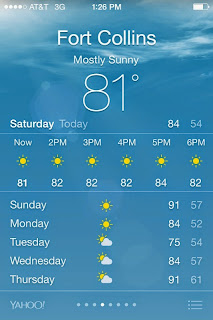 In the end the stats were: 30.2 miles, 3648 feet of climbing, the same of descent, 5 hours, 14 minutes and 7 seconds. That's about a 10:24 pace. I ran a steady pace the whole way, I didn't vary each out and back section by more than a few seconds. The last two out and backs were hot, it was 81 degrees when I finished. I felt good in the heat, and strong even in the late climbs. The cyclists were cheering for me as they went by, maybe I looked strong coming uphill. Or maybe they were just cheering because they were going downhill!

It was a mentally refreshing run, too. I didn't think about anything. I listened to my music and watched the cyclists stream by. I needed that after this past week with my brain going at full speed the whole time.

I was worried that I was too fatigued, but today's run put those fears to rest. I got a solid week in, 86+ miles, and some good workouts. I'll take tomorrow off. I'm only planning two more long runs in July through early August and those will be flat terrain, one might be on the track. The marathon in mid-August will be a hard long run, and then I'll be 5 weeks out from NorthCoast. 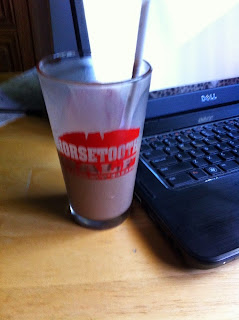 I wrapped up my wrap-up with a milkshake. A chocolate one. I made it myself. Now it's time for a nap with Buffaloes.
Posted by Alene Gone Bad at 4:00 PM

Beautiful views! Looked like a great day for a run!