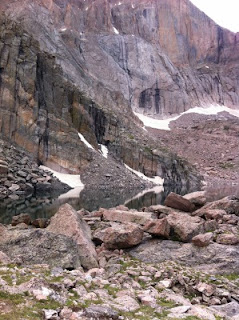 At 4:30 am I knew I needed to take advantage of the day. I tried to go to bed early last night but couldn't fall asleep and was up until past 11 pm. I set my alarm for 4:30 so I'd get up in time to get to the Longs Peak Trailhead before the whole world arrived. 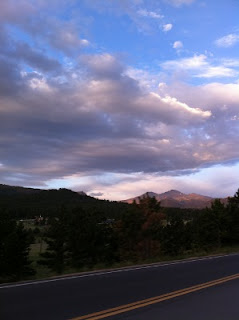 I almost fell back to sleep when the alarm went off, but I did make myself get up. It only took an hour to get from my house to the trailhead. Just before I turned off highway 7 to the Longs Peak road, there was this huge elk that crossed the road. I pulled over and took a few pictures. 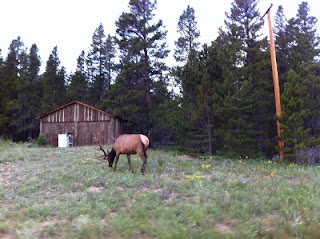 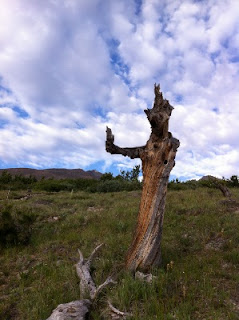 I started out walking on the trail, I needed to figure out right away if my hamstring was even going to tolerate it. But there was not a peep out of the hamstring or the groin, and I began to jog the flat sections, being careful on the steep parts to not overstride. 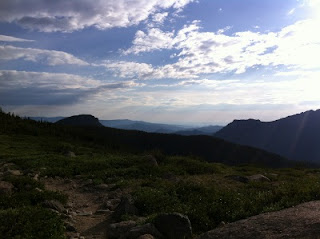 When I got to the junction of the Chasm Lake/Granite Pass trail I decided to go to Chasm Lake, because there was less vertical involved, and I didn't want to overdo it. 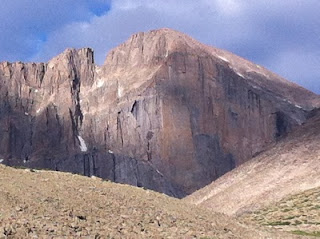 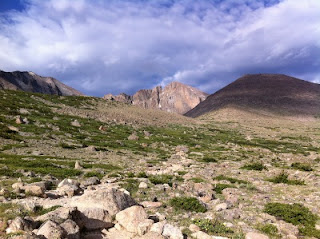 I took a ton of pictures on the way up, the morning was cloudy, but the sun came out enough that the light was constantly changing, I wished I had been able to drag myself up earlier and catch the sunrise. 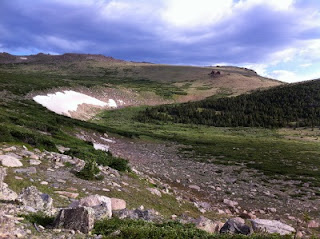 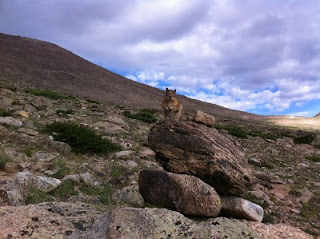 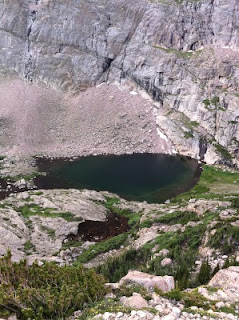 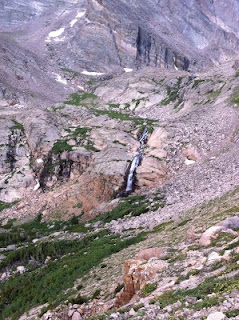 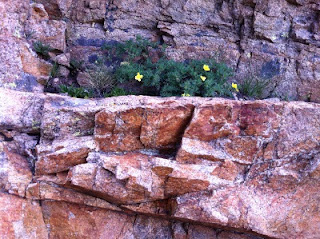 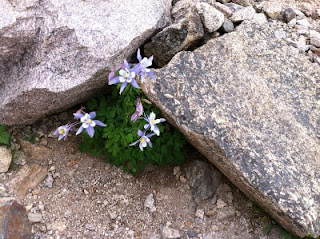 I continued along the trail to Chasm Lake and at one point I could see the waterfall between Chasm and Peacock Lakes, and so far there were plenty of wildflowers, but nothing breathtaking. Suddenly I turned a corner and there was a whole hillside full of freshly blooming columbines! 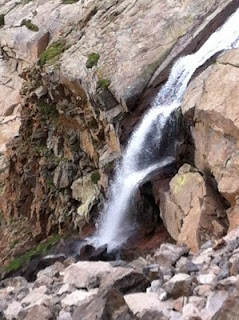 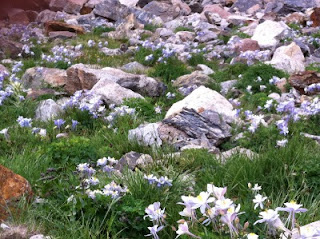 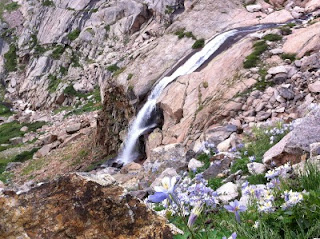 Fortunately there were not a lot of people out this morning, I needed the peace more than anything. There was one loud and obnoxious group of young boys below Chasm Lake but once I got to the lake I couldn't hear them anymore. I had the lake to myself. When I got to the end of the trail before the final climb up to the lake, which is slightly more technical than running, but slightly less technical than bouldering, that was the challenge for my body. Once I felt my groin and a couple of times I felt the hamstring as I climbed up the rocks, gripping small ledges with my hands. But it was nothing that lasted, it was just an awareness of these vulnerable places in my body. 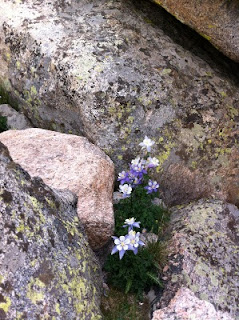 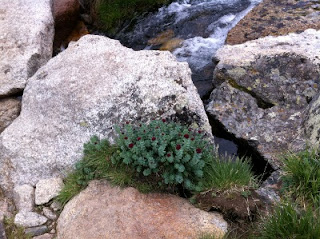 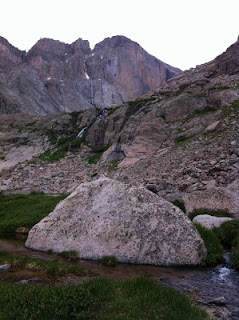 I think it was a total of 8 miles and maybe 2400 feet of climb and the same of descent. Not much, but enough to challenge my flatland-acclimatized body. The hardest part of the whole thing was whenever I get on rocky stretches of trail and something causes my ankle to twist, causing eversion of my ankle, I am in serious pain. And it happens a lot on trails. That peroneal tendon injury is still there, but at least I don't feel it on the flats and running smooth surfaces anymore, but rocky trails kill me. Just a small twist is excruciating. I wonder if that's a permanent thing or if I can rehab it further. I hate to think my trail running days or even hiking days are over. 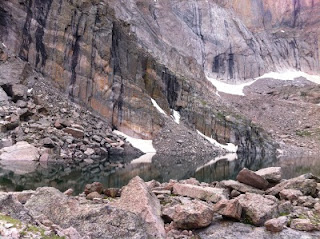 I was out for about 4 hours and I took a gazillion pictures.

This weekend it seems like everyone is at Badwater, Hardrock, or Vol State. This was my wimpy attempt to have my own little adventure run, a measly 8 miles, before I go back to work Monday for a week of way too many hours and who knows what chaos will ensue with the new computer system, which goes live tomorrow.

I'm feeling better about things psychologically. I've done a lot of talking with trusted friends and colleagues the past few weeks. As one of my nurse friends pointed out, there is a lot of physical, mental, and spiritual abuse that goes on in nursing. It's something you have to come to grips with if you're going to stay in the profession, and decide what you're willing and not willing to tolerate. And that's really what I've been struggling with. Right now it's more in the spiritual realm for me, though 12 hour shifts make it feel physically abusive to my body and definitely aggravate all the other factors.

And my friend Chris who has been my nursing mentor since the day I started, reminded me that it's good practice to let go on a daily basis. 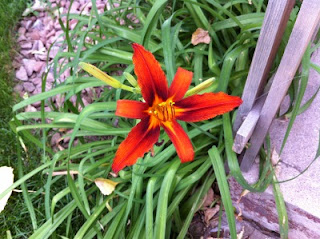 I need some balance back, and I think I needed more of a break from running than I gave myself. Jumping into June with 2 marathons, even as easy training runs, was not the best idea. I can tell because I am enjoying the little forced break from running, I have not been obsessed at all with maintaining fitness at an intense level. One more week of extra time at work, and then I can recover and move on with my own stuff.

Maybe all the little aches and pains will disappear then.
Posted by Alene Gone Bad at 9:20 PM