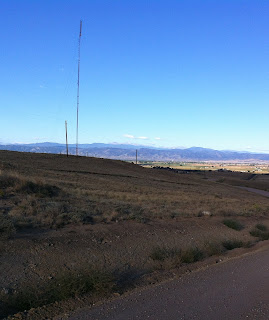 What a beautiful day for a long run!

I woke up early early, at 4:30 am, not intentionally. I had some coffee and got moving slowly, I threw all my junk in the car including the cooler with ice and lots of cold water and drinks, not wanting to have a repeat of last weekend's heat problems.

I drove out to the Bacon Strip and stashed a gallon of half-frozen water under some shrubs about halfway on the loop, and drove back to the parking area. I started just before 6:30 and headed clockwise. I told Jen I would meet her out there by running in that direction.

I knew there would be a lot of runners out this weekend, I got an e-mail about the plan to run Bacon from Bob's group, and I knew Danny and Dianne would be out there too. Eventually I ran into everyone, plus a lot of runners I didn't know.

I took it easy on the first loop, walking all the steep hills, drinking and eating as I walked. I was freezing for the first 4 miles! I didn't even want to refill my water when I got to it, but I made myself drink a whole bottle there and refilled both bottles. I wanted to be sure I had something left after the first two loops, my plan was to do 2 1/2 loops for 25 miles.

Once I dropped down off the high point it was starting to warm up. I saw Jen when I had about a mile to go on the first loop, she was out there doing her own thing, having just returned last night from her mother's funeral in the midwest. She described her run as grief therapy, and we talked for a few minutes and then went on, agreeing to catch up later.

At the car I refilled my bottles, drank a full bottle, re-lubed all my chafing spots, grabbed my bandana and took my piece of Starbucks banana chocolate chip coffee cake, and headed out counterclockwise and ate on the way up the first big hill. I saw Bob's group on my way out, and I saw Dianne soon after I made the first turn and we stopped and talked.

Then I took off again, feeling strong as I ran up the big hill. I refilled again, then came back to the car, restocked on enough water and food for 5 more miles, put some ice in my bandana since it was getting warm, and took off again.

I saw Danny this time, he was finishing up, and I did the 4 mile loop plus an extra half mile out & back on one of the county roads to wrap it up with a strong and steady 25 miles in under 5 hours, which, on the Bacon Strip, isn't quite as easy as it sounds. 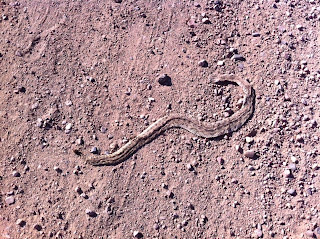 It felt good to run slow, I haven't tried to run that slow in a while. I felt just as comfortable at the end as I did at the beginning. Managed to wrap up my week with 66 miles and some decent workouts, so I am happy about that.

I knew if I got hungry I could always make some road hors d'oeuvres, the Bacon Strip special: 1 snake wafer, 1 can of cheez whiz, and a bacon strip. Roll it all up and it's delicious!
Posted by Alene Gone Bad at 1:40 PM