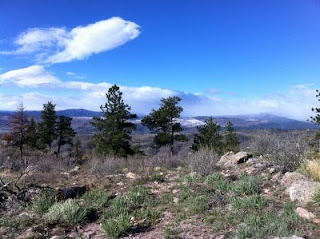 The dire weather that was forecast for our area held off just long enough to make for a pleasant morning of running. I woke up at 6:30 totally surprised to see blue skies, with a bank of clouds behind the foothills, just like yesterday. It was cool and windy, but the sunshine was parked over us for at least a few more hours, the way things looked. I decided to go back to the original plan of Rock Repeats.

When I arrived at the Horsetooth Mountain trailhead at 8:30 am there were only 4 cars there! Usually on a weekend in the spring, the parking lot fills up early. Probably a lot of changed plans due to the anticipation of nastiness.

It's always nice to have the trail to myself. The first time up I ran a relaxed pace, figuring that a steady pace today would be the way to go, without bashing my quads too much. It's been several weeks since I did my last repeats up here, and I only did two. I go back to work tomorrow, and squatting down on the stool to start IVs is a challenge with sore quads.

The first trip up was uneventful, but the views were amazing. I could see where some of the foothills south of us got a dusting of snow, down to about 7000 feet. But the snow hadn't reached this far east. It was moving, though, and the wind was strong when I got away from the more sheltered areas of the trail. I added a little extra to each of my repeats this time. I went past the Wathen trail intersection and past the log bench, to the end of the singletrack directly under the Rock. Just a little more trail to challenge my ankle. 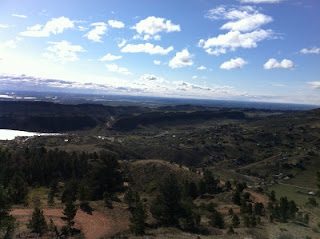 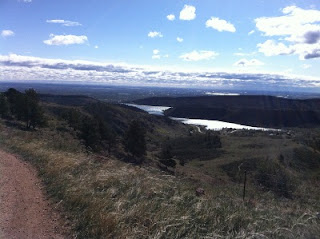 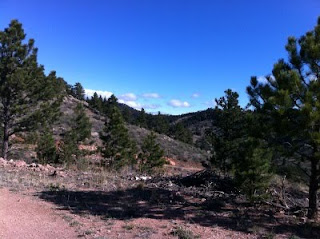 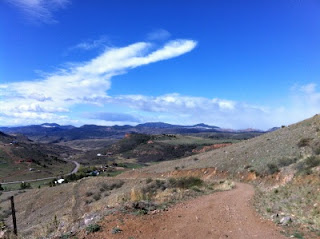 The second trip up was still sunny, but some sleet was flying around every so often. I couldn't figure out where it was coming from because there were no clouds above me. On the way up the second time I pushed a little harder and felt good. As I headed downhill, I could see the storm moving in over town, and it looked worse down there than it was up on the hill where I was. 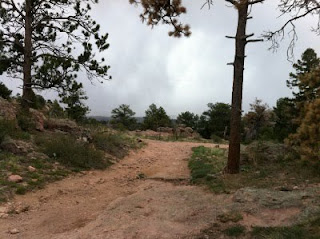 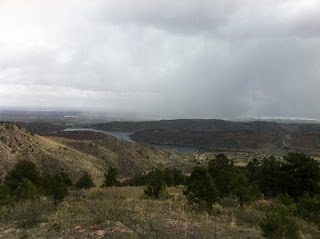 When I was almost to the bottom, I ran into a group of runners coming up, I figured they were out there doing a run of the course of the upcoming Quad Rock 50, Nick's inaugural event this May. It will be a week after I run the 24 hour, and I'm not anywhere near ready for that kind of trail running. Hopefully all will go well this first year and the race will become a draw for lots of runners. We have so many good trails here, I think it will be hugely popular.

When I reached the bottom, I got some drinks and food at my car to prepare for my third ascent and who came down the trail but my friend Cat and a few other runners, doing the Quad Rock course. I did most of the first mile of the ascent talking with Cat, and then we reached the fork where they went up the trail, and I took the road to the left. 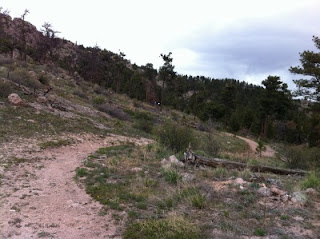 The only thing different was the sunshine was no longer there, but the wind hadn't changed and there was still an occasional mist of sleet. I got almost to the bottom and then did a little extra out & back on the service road to wrap up 15 miles for the day. I ended up with 4050' vertical gain and descent. Not bad to wrap up my last full mileage week prior to the 24 hour. Next week I'll cut back a little, but after that I plan to take a full two week taper. I can allow myself that luxury now. I'd like to give myself every chance to have a good race in Iowa, even though I'll be happy to do 100 miles. 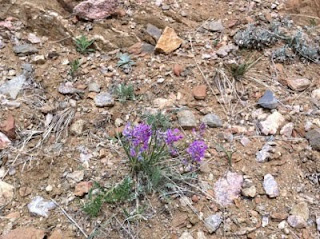 Okay, so here's where I have to rant. On my last descent, as I passed the first junction where the trail meets the service road, which is about 0.6 miles from the parking area, these two IDIOTS came huffing up the trail as I was running down. I could smell the cigarette smoke before I got there, and they were the source. What kind of stupid idiot would smoke a cigarette when we've had such a dry spring and the wind is howling? STUPID STUPID STUPID.

Should the park rangers start handing out nicotine patches? Maybe I should have said something, but I didn't. I was so mad after I ran by and thought about it. That's all we need, a good wildfire to start off the season. I'm mad at myself for not running back up the road and lecturing them. All it takes is one dumbass and POOF!

Since I'm on the topic of rants, I find it interesting that the Boston Marathon organizers have put out a warning to the runners about the predicted heat in tomorrow's race. They said, "inexperienced runners" should consider not running this year. My friend Connie is running with another runner from here, Dan, who is blind. They are going ahead with it. They are both well-conditioned, experienced and smart, so I'm not overly concerned that they'll get into trouble.

This raises some questions: first, any runner can get in trouble with the heat. Experienced and competitive runners are probably just as likely to have a problem from underestimating the effects of the heat. And doesn't the Boston Marathon start at some crazy hour out of tradition, like 10:00? Hello...

If you're training for an event you really need to be prepared for all conditions. If you know the race starts late, and it's a spring race, then heat is one of the first things you should be prepared for. Being a road racer doesn't exempt you from having to use common sense when it comes to weather. I sure hope they won't have that mentality of "Give me an IV at the finish line". As if it's the race's responsibility to put a bandaid on what they have just done to their bodies.

Anyway, just had to put my $.02 in about Boston. Let's just hope the prima donnas stay away. A race is a race, and it comes with a set of conditions: some are predictable, some are not. You need to be prepared for anything, so if you're not prepared, do the race a favor and stay home.

Your territory is so beautiful. I'd love to live there.

Ultra Monk, it is beautiful here. We are so lucky to have this place.

Kathleen, I haven't even started. I can go off on LONG rants...just haven't in a while! I hope you're enjoying the trails today too...

I'm still reeling from something I haerd this week that I want to rant about. I met a woman who said she'd finished a marathon; she was at least 100 pounds overweight, so I thought perhaps she'd done one in the early 1990's, but she said it was last year. There ARE a very few people who are both fat and very fit, but not that fat. She said she'd trained for 6 months, getting in her miles every day, working really hard and dedicated to finishing. Her time? 11 hours! I was so flustered, it's hard to know where to begin the rant!

Wow, I'm not sure where I'd start mmy rant about that either. Good for her, for being that determined, but doing a marathon carying 100 extra pounds sounds a little like a death wish. I hope she was able to drop some of that weight. 11 hours on your feet with all that weight- sounds like a lot of nurses I've seen, sadly. It doesn't sound like fun, anyway. If she could use that same determination to improve her health in other ways, she'd be better off. I'm at a loss for more words...