Just Another Thursday at the Track 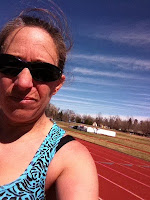 Perfect day, awesome weather, and 20.5 miles today, mostly on the track. Not that you'd know it from the look on my face. I took the picture at the end, when I was fried. But I did wear one of my Walmart tank tops.

First I ran with the girls for a couple of miles. They were more interested in sniffing than running. When I walked in the door I saw a message light on the phone. Oh shit the mammogram, was the first thought that crossed my mind. I thought briefly about who else might be calling me on our land line this morning. Nobody. I listened to the message. Whew! BIG Relief. Something else, unimportant.

I took another deep breath and loaded my big pack with water, S caps, some snacks, and my phone, MP3 player, sunscreen, lotion, and a few other items. I was running over to the track to run for a couple of hours at a steady pace in lane 2 again, then running home. When school is in session, it's easier to avoid parking at the university because of the parking nazis, who will sneak up on you and write you a ticket, and there are few empty parking spaces after about 7:45 am.

I ran laps trying to keep a comfortable pace, but threw in strides throughout the whole workout. There were a lot of people coming and going the whole time, some have absolutely no clue about track etiquette, or common sense. If everyone is going counterclockwise, why is there always some crazy idiot who tries to run or even walk in the opposite direction in lane 1, when there are people coming toward them, going fast! Fortunately they (the crazy idiots) stayed out of lane 2, but they are usually found in lane 1, because it's shorter and they know that much. But being in lane 2, you have to watch out when there's a near collision between the fast runners and the crazy idiots.

By the time I was done, it was warm and I'd gone through all my water. Fortunately the hose was out there, they filled the steeplechase pit recently so I knew the water had to be on somewhere. The drinking fountains are still turned off. I tried the pump and it was on! Lucky, otherwise it would have been a dry 3 miles home.

As I sat there drinking what was left of my cold water and thinking about putting on my pack to run home, I felt completely depleted. My legs were so tired, they were jelly on toast. On the way home I walked a few times, my legs were so dead. I ended up not running at all yesterday after my nap, so I don't know why I was so tired. But I survived. 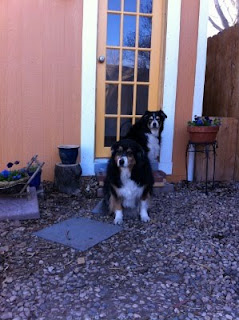 I came home to no phone messages, and after a shower, had the energy to run a few errands and plant some blue flax and firewheel seeds in front of the woman cave. I'm hoping to get some good color out there. I played frisbee with the girls in the back yard. Some of the grass is turning green and a few of the plants are getting little green leaves.

If I recover by tomorrow morning I might go ahead with my long run plans but if not, I'll wait until Saturday. I have an idea for an 8 hour training run that will help prepare me for the 24 hour. No, it doesn't involve Walmart and it's not in Florida. I succeeded in controlling my impulses.
Posted by Alene Gone Bad at 5:53 PM