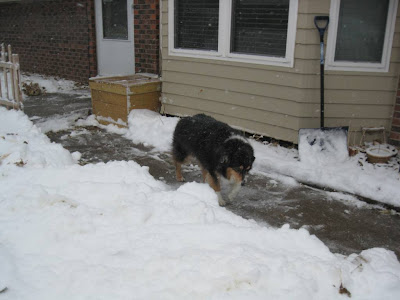 This morning I woke up too early, and the temperature was 5 degrees outside the kitchen window when I started the coffee. I had a doctor appointment first thing, and I was fasting because I wanted to get all my labs drawn right after I saw her, and get it over with.

I'll see what my labs looked like later this week, but the appointment went well, no surprises, I haven't shrunk any, I am a couple of pounds heavier than last year, but that's where I'm headed these days. I told her about the brain fog, we're checking my thyroid labs and I'll get a thyroid ultrasound next week to see if anything has changed with my little nodule friend in there, but overall, nothing exciting.

I blew off my run yesterday, it was cold and breezy and I had one of those "don't wanna" days. So I didn't. I ran a grand total of 18 miles last week. My motivation has been in the toilet. It's the cold weather. I am such a desert rat, which really should be my code word for wimp.

Monday starts my new week as far as my training goes, so I had to start fresh today. There were no excuses despite a predicted high temperature of 10. Just last week, I discovered, to my great horror, that my wind pants that fit me last year wouldn't come up over my hips. I was without windpants, unless I wanted to swallow the bitter pill of admitting that my butt is getting FAT and I need to buy a larger size.

I was lamenting my expansion to my friend Keith on the phone Sunday afternoon and she said maybe I was retaining fluid and that's why my pants didn't fit. I asked her, "Retaining fluid in my BUTT?!!"

I do have a big pair of windpants, but they used to belong to Dennis, and they are too long for me and I have to do all sorts of weird adjustments before I can wear them. I just couldn't believe it, that my butt has gotten that much bigger since last year. I dug the small pants out of the closet again, loosened the drawstring all the way, stared into the crotch and down the legs, and fervently believed they were going to fit.

POOF! Suddenly my butt was neatly tucked into them, no problem pulling them over my hips, even with my thick tights on. They fit!

Okay, as outlandish as it sounded, maybe Keith was right. Maybe it is possible to retain fluid in your butt. Or maybe I was so brain fogged last week that I didn't loosen the toggle on the drawstring enough. Or maybe I was constipated. It is constipation awareness month, after all.

Whatever the reason was, my pants fit and I no longer had any excuse to stay indoors. Even if the temperature was nine degrees with a -2 windchill.

I got dressed and then asked the girls if they wanted to go. Iris bounced around until I put her leash on, and she barked until we went outside. Isabelle came down to see what the commotion was, and as soon as I put the leash on her, she sat down in her spot and resisted, absolutely refused to move. She got that wimpy look on her face and I wasn't about to make her go out in 9 degree weather if I couldn't even motivate myself all weekend when it was warmer than that!

I took Iris. Isabelle was content to win the cute Buffalo contest. 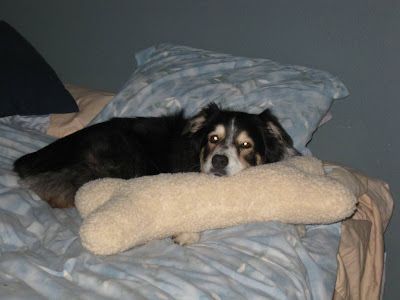 Iris had an ice beard after a mile, and we did three miles together before I decided to take her home. I wanted to run faster. She got mad and started barking at me as soon as I took her in the house and went back out to finish my run. Isabelle was content to stay in her position. 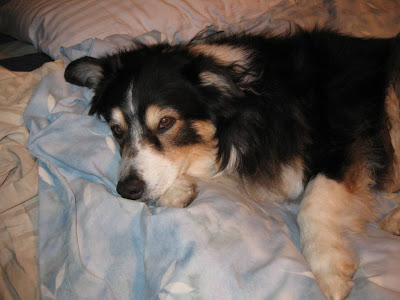 I did seven miles total, including some strides once I felt warm enough and the wind was at my back. When I got home, I did my abdominal workout, too.

The woman cave is coming along. Dennis is getting plenty of supervision by the Buffaloes. It is going to be the BEST woman cave ever! 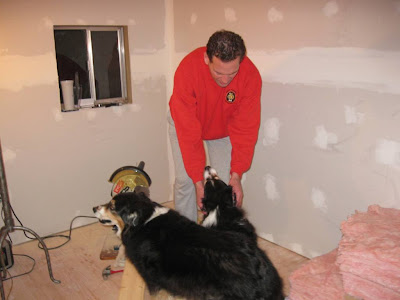 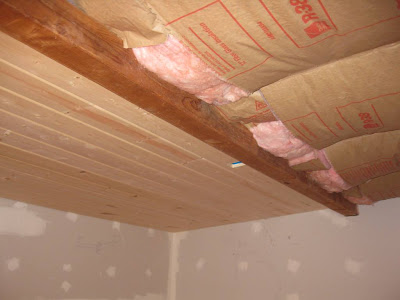 I finally got a lot of loose ends cleared up, little projects and things I needed to finish, to pave the way for focusing on the next year's goals. I now have two "projects" to focus on, one is staying up with my writing, since I have a couple of regular commitments in addition to my blogs, and studying for my oncology certification exam, and then there's always running & training. But it feels nice to have narrowed things down to just a few instead of having scattered unfinished business everywhere.

I like it when it’s simple. Give me pants that fit when it's 9 degrees, and I can do anything.

Today it was double- I went running when it was 18 degrees and it did feel noticeably warmer. That's still under your cutoff, though. I hope for your sake it stays warm up there. It's supposed to hit 40 here tomorrow, heat wave, but I'll be indoors at work all day!