Return of the RPB... 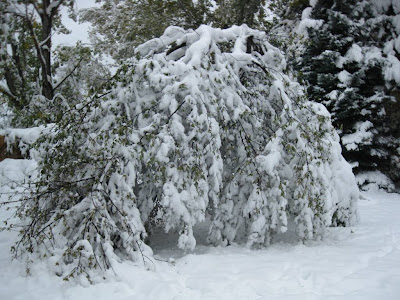 What a weird week this has been. The sunshine finally came back this afternoon, but it's not forcing me out the door yet.

We got our first snow yesterday and it was one of those heavy, wet storms that splits trees and wreaks havoc in all kinds of ways. We were without power for a while, our maple tree took a hit, and our cherry tree is now flopped over in the back yard and we'll have to cut it down.

I woke up yesterday morning, needing to go to work for a staff meeting, and found big tree limbs down in front of our front door. I had to climb over everything. Then once I managed to get to the car and push the 6 or so inches of heavy, wet snow off, I discovered two huge cracks in my windshield. Then I saw our neighbors' house. We didn't fare too badly compared to them- their huge old cottonwood was half down, leaning against their garage and new roof. They moved all their cars during the night.

On my way to work, I had to go a different route because the way I normally go was blocked by downed tree limbs. Afterwards I had a dentist appointment, which fortunately was just a cleaning, nothing else needed.

This morning I had to go to a class at work, mandatory training for all nurses on the new AEDs we're getting. I had signed up for a class earlier this week, on Monday morning before my work shift, but spaced it out. I had to sign up again and this was the only time available that I could make. So I dragged myself out of bed and when I went out in the 18 degree morning to warm up my car, the locks were frozen. CRAP!

I have never had frozen locks before- or not in my recent memory. Not with this car, anyway. I looked at the clock. I had just enough time to put my running shoes on and run to work. But I really didn't want to run to work, so I decided to keep trying with the car. My employee badge was in there too, so I might have a hard time getting in the building. I was pissed.

Finally, some miracle happened and I got one of the doors open. The sun wasn't up yet to warm things up, there was a fog sitting on us. Maybe the universe was afraid of the wrath, feeling the threat of a forthcoming hormonal rage, which could likely have happened if my doors didn't open within another 5 minutes.

I went in, attended the class, and stuck around afterwards to get my annual TB mask fit test, something we all have to do. Dani took a picture of me in my Spongebob outfit for the test.

I had originally cancelled a haircut appointment because of my goof-up with the AED class. But I got done with class and the TB mask test in time, so I called to see if I could reschedule, and I was in luck- my appointment time was still available.

I went in and asked the woman who always cuts my hair if she could take a lot more off than usual, and thin it out. I proceeded to get the worst haircut imaginable. It really was my fault, I wanted less hair- my hair is super thick and when it gets long I feel like I'm carrying an extra 10 pounds on my head. My hair grows fast, fortunately. But right now I look like I have a mop on my head. It truly is awful- maybe I should go get it shaved. I'm going to have to pin it up in different places and tie it back for at least the next 6 weeks, until it grows out enough to figure out what to do next.