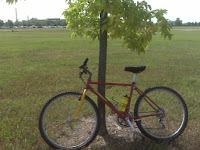 My basic daily ride is a 30 mile out and back with a loop in the middle. I call it the Tour de Wal-Mart. Why?

Because there are two Wal-Marts along the way. I ride from home in Fort Collins, down the Power Trail and south to the Loveland bike path, which I take to the first Wal-Mart, off Eisenhower & Denver, and then I go out the Loveland bike path near Boyd Lake and take the path until the place where it currently ends, near 287, where there is another Wal-Mart. 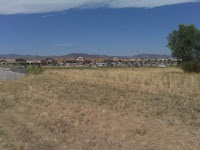 If I wanted to add more mileage, and more Wal-Marts, I could easily tack on two more. I could take the Poudre Trail around to the Wal-Mart north of Lemay and Mulberry, and I could ride out east Harmony to the Wal-Mart at I-25. I don't actually go in the Wal-Marts, but they are there as fixtures on the landscape.

I've been alternating between my two bikes, the 1986 Fat Chance with dinosaur components, and the Surly CrossCheck. I love riding both.

All this time on the bikes has given me time to think about goals for next year, to build up over the next few years for some longer adventures.

I made a promise to myself when I turned 40 that I would be healthier and have better fitness at 50 than I had at 40. At 40 I was just starting to get my life back in order after being a semi-vegetable due to my undertreated thyroid condition.

Dennis just turned 50 which reminds me that I'm three-quarters of the way there from 40, and it won't be long. I know I already have much better endurance and I am healthier in a lot of ways, but I am carrying around some weight that I've put on in the past 4 years. My acquired dislike of doing weight training has kept me from working my upper body and overall strength, and adding it back into my life would do a lot to boost my slowing metabolic rate.

I do lift weights but my weight routine is completely pathetic. I do the bare minimum that I can accomplish in about 15 minutes three times a week, and I have to force myself to do that. Yes, I used to be a personal trainer, and I can't even make myself lift weights anymore. I used to love weight training, but burned out at some point along the way.

I have a solution and I'm getting organized to get started on lifting weights again within the next two weeks. We'll see what happens. Maybe I can revive my interest in weight training again with some creativity. First I need to dig my long lost weight sets out from under all the junk in the garage that Dennis has piled on top of them! That should be a workout in itself! 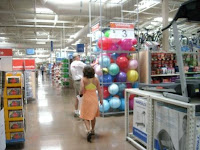 I guess you could say I am following the Wal-Mart slogan. Save money, live better. By riding my Tour de Wal-Mart and not going in, I am saving money, and all these great training ideas will help me live better. I could be the Wal-Mart poster child with my special Wal-Mart dress that I wore in Las Vegas, with my tacky sports bra hanging out the back. Actually I got both the dress and the bra in the Target girls section, but don't tell Wal-Mart that.

Buy a sandbag and start lifting. They work.

Woofie, it's either that or dig up some rocks! I hope that by the next time you see me I'll have made some noticeable progress!