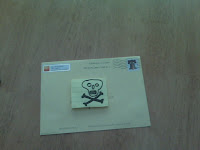 More hate mail today. Awesome! Unfortunately these people (or person) sending the vitriolic comments didn't have the cojones to sign their name(s) and were dumb enough to identify themselves as members of the Fort Collins Trail Runners. Yeah, that does a lot to support your arguments for the legitimacy of your group. Good job!

I am sure that your fellow group members who had the good sense to write intelligent, well-reasoned comments and sign their names would be so proud of your representation of them. Now go change your diapers. WAAAAAH!

People like this don't deserve the time of day, but I'm pointing this out for a reason. I've been chilling over the past week or so since I got my first nasty unsigned anonymous comment, planning to blow it all off. The people writing this garbage obviously don't read and completely missed the point of my July 31 blogpost, which was about a link to my guest post on John Vonhof's blog.

Since then, I've been accused of badmouthing the Fort Collins Trail Runners, and my supposed transgressions include: (a) referring to the group as novices, (b) suggesting that running in the heat is dangerous and people were out there at 24 Hours of Towers looking bad and suffering in the heat of the day, and (c) a mishmash of half-reasoned accusatory statements that include the following: I think that because I've run Badwater that makes me superior to them, when in fact they've run a lot of miles, and watch each others' backs, and are experienced ultrarunners, that suffering is a necessary part of running ultras and I'm full of $@%# for suggesting otherwise, and so on...

But there are issues pertaining to safety and the integrity of the sport of ultrarunning, not to mention common sense, that are being missed in this defensive backlash.

It doesn't matter if you're affiliated with a group, and it doesn't matter how many miles or which races you've run, if any at all! If you're a part of the sport of ultrarunning, whether a runner, volunteer, race director, or novice, respect the sport, and it will respect you.

The important points will likely be missed regardless of what I say to people who are of the hateful, anonymous comment-spewing variety.

For the rest of us who can read, think and reason, I'll be writing a blogpost in the near future that addresses these issues and concerns.

It's too bad people have too much time to take everything someone else says personally. Really. Your blog, your thoughts!

I know, it's too bad people have to take things so personally, but there are always a few in every crowd. Putting energy into positive things is so much more rewarding. C'est la vie!

Wow, that seems quite unfortunate. It seems like a bad combination of missed communication/interpretation of the initial message, confounded by an inappropriate response. I think the discussion with Alex and Brian cleared up nicely what your intentions were (both from a running and medical standpoint), and how the experience was in general (fun and ultimately safe despite the heat).

Anonymous and nasty messages don't represent the FCTR group as a whole (nor do they represent Fort Collins community OR the trail running community, either), so it is right to disregard such communication as meaningless.

Mike, I really appreciate your comment. I know that these individuals (but I'm pretty sure it's coming from one person) are not typical of FCTR or any running community. There's one in every crowd, it seems.

I will be writing a blogpost soon about running events, what can go wrong, and some thoughts on this from my own personal experiences, and experiences of my friends who have directed races in the past. I truly hope it won't be taken as a criticism of the Fort Collins Trail Runners because it's not about that at all.

It's just something to make everyone think twice about how they set up a running event, and it's really about safety of the runners, protecting the race director and staff, and ensuring that the event, and other events, can continue in the future.

Fort Collins is such a perfect place to be a an ultrarunner, and there are so many great trails nearby with potential for organized events and races, I think anyone who wants to pursue this could really put Fort Collins on the map as an ultra mecca.

If they want to let out our secret.

Happy running to you!

I agree, that hate in any form is unacceptable. I don't think they represent the FCTR at all. I think that many took offense at assumptions stated in the original post, myself included (I like to suck on ice;), you'll be able to access my little poorly used blog to see my thoughts when I read yours). It says nothing of my experience or that of the others. That doesn't mean that reverse assumptions or anger clears or resolves any conflicting opinions. It is your blog and you are completely free to state your thoughts and opinions, but being that it is public, we have ability to comment. That said, I hope we can narrow the abyss, and start clearing the air. I hope you can join us soon, and not let anonymity to create misunderstanding or misinterpretation to happen in the future. We have a wonderful community for running that everyone (you and I included) is able to participate in.

Many happy trails and roads!
Victoria Funk
Running since 1979

Victoria,
Thank you for your comment and for building a bridge.

No matter what we write, one thing we cannot control are others' perceptions of our words. I am still having a hard time understanding why it caused such an uproar when I purposely chose words to avoid making generalizations, but they were still interpreted that way.

Anyway I am glad to put this behind us and move on. I hope to see you on the roads or trails in the near future.