The Bedpost Lady & Other Tapering Tales 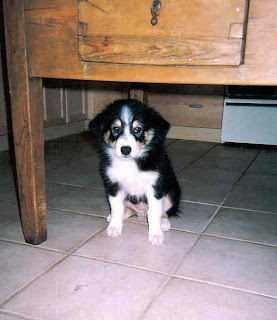 Tapering is a psychologically difficult time for an ultrarunner. After months of long training runs, rearranging your life and schedule, and building up to the best possible level of fitness, it's hard to switch gears and rest. You have all that energy that you've been using to put into workouts. Now you have to focus on resting, letting the body heal and recover, and being mentally and physically prepared on race day.

Losing fitness is not a concern because after years of training, your body adapts to the demands of ultras and mentally you have the ability to push through anything. It's easy to continue the high caloric intake which can lead to gaining a few extra pounds if you don't pay attention.

Staying hydrated, eating high quality food, and resting the body are your main physical concerns. At taper time you want to do light, easy workouts, starting by cutting back on mileage slightly at the beginning of the taper and dropping off progressively each week until you allow yourself nearly complete physical rest.

Taper time is something I always look forward to because of the amount of free time I have when I don't have to train. My life starts to feel somewhat normal again. I can return to doing the activities I normally enjoy that have to be cut back when I'm spending every spare minute working out in some way.

I always feel like I have more energy and I have to channel it into something or I bounce off the ceilings and walls. Fortunately Badwater takes a lot of time to plan and prepare for. I have an entire room in my house plus part of the garage taken up by Badwater gear.

Tapering allows you time to plan and organize for the event, and to mentally prepare. Some examples of mental preparation include visualizing and imagining what it will feel like to be there, seeing yourself out there running or imagining what you will feel like in your body at different times during the race. For Badwater, you need to be thinking through scenarios of what could happen and how you will deal with a challenging situation.

I've heard too many horror stories of people who were ready for a race where they'd trained for months and some freak thing happened. I've had a few tapering mishaps myself.

Avoid Bedposts
One year I was staying in a motel room the night before the Collegiate Peaks 50 mile run and I was sharing the room with another runner. It was late when she arrived and I heard her outside in the dark fumbling with her keys, so I got up to open the door for her. As I jumped out of bed, I smacked my leg into the bedpost. The room had bedposts on the beds and I didn't even think of it, who has bedposts?

Being in an unfamiliar setting, walking around in the dark, not a good combination. I ended up with a hematoma the size of my fist and could hardly walk the next morning, so I couldn't even start the race. After that I got called the Bedpost Lady for years, I still get teased about that and it was 15 years ago when it happened! The solution? Be careful walking around in the dark and be extra careful in unfamiliar places.

Avoid Poodles
Another time I was running a 10K race a couple of weeks before I was signed up to run a 100 Km race. I was in great shape and wanted a fast run to sharpen my leg speed. The 10K was held on city streets, and I was accelerating during the last mile of the 10K, and suddenly this miniature poodle came out of nowhere, from someone's front yard, ran between some parked cars and darted in front of me. I had no time to react.

I tripped over the poodle and almost fell on the asphalt. I caught myself, but I did something to my knee when my foot hit the poodle, and I was sore for over a week. The poodle wasn't hurt, it kept going, chasing after whatever it saw across the street. Fortunately I had enough time before my big race and I healed in time, but it could have been a lot worse. I don't know the solution to that one. Avoid poodles while tapering?

Avoid Picnic Tables
Yesterday after the Estes Park marathon, I saw some runners I know from the race circuit, and Doug and Ron from the running club were there, and Dennis came up to watch the marathon after he ran a 5K in town that morning. We were all at the food tent where they were serving breakfast burritos to the runners after the race. We got our food and sat down at a picnic table and were telling race stories.

There were 5 or 6 of us at the table and someone got up suddenly, and the table started shaking like it was going to fall apart and crash. We all jumped and watched what the table was going to do. It managed to hold together, but I decided to move to the next table over. The second I crossed the finish line, I was officially tapering.

The moral of the story is, if you see me acting strange, being generally avoidant of things over the next few weeks, understand that it's not you...I'm tapering. 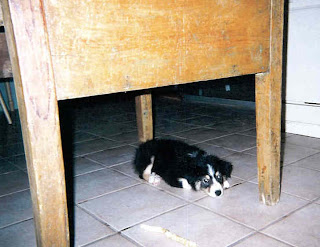 Email ThisBlogThis!Share to TwitterShare to FacebookShare to Pinterest
Labels: taper worms, Tapering before a race

It was nice seeing you again on Sunday. You sound very ready for BW.

Yeah, that crickety table really got our attention, huh?
I liked the stories. Only I'm paranoid nearly all the time now. I scared to walk around without shoes. And at home is the worst! You'd think it'd be otherwise, but I get careless at home, and impatient, and I try to do 10 things at once. I stub toes, break toes, skin my knees, nearly break my shoulders cutting corners... Can't take me anywhere? Hell, I can't even stay home safely!

I sprained my ankle at mile 20 at Estes. So my friend ribbed me that I'm "allegedly a trail runner but I can't even handle the paved Estes Park Marathon."

Good luck with taper. It's easy - it's hard.