Rule of Twos for Tomorrow 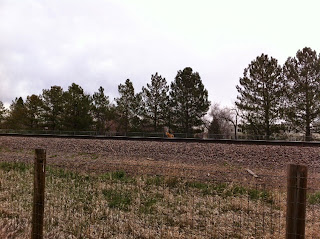 Sixteen miles today, a loop around the south part of town, finishing up on the Power Trail. I saw this fox crossing the railroad tracks. I saw the same fox in the same place earlier this week. He's a deep red color, but his long gray tail looks rough and broken.

I didn't push it at all, did some fast walking during the run, and realized I haven't been doing much walking. Walking always saved me in the past on my longer runs, but I haven't been doing it except as breaks on the track. I think that's a good thing, but I feel like my walking pace has suffered as a result. I won't worry about it, I'll see how it all comes together at Cornbelt.

I felt crabby and annoyed today, I didn't feel like interacting with people. I was trying to find the route that would keep me away from the places where there would be a lot of traffic. I just felt irritable. When I got home Dennis took me out for lunch to try to cheer me up. I did laundry and took a long nap.

We have this one neighbor, every neighborhood has one, who thinks he's the only person who lives here. He decided to do some project in his back yard, I think he got a friend to help him. They had one of those really loud annoying ditch witch mini-backhoe things with a backup horn. Nobody would be doing this on a Friday night except for this guy.

I'm not sure what they were doing, but they started Friday around 5 pm and were doing it maybe until 8:30- it was such a beautiful evening and it would have been nice to be able to sit outside and enjoy the warm spring air before mosquitoes take over. But instead there was this jerk and his friend- they sounded drunk the way they were hooting back there, and driving that thing like a maniac, even after it got dark.

It was annoying. And then today when I got back from my run, they were at it again. This is the same A-hole who shoots off fireworks for nearly a month leading up to the Fourth of July and scares Isabelle and the other neighborhood dogs.

This afternoon I was so irritated when he started it again. I closed all the windows and doors to the back of the house, turned on a fan, and piled pillows over my head to block the noise so I could sleep.

Tomorrow morning is the Horsetooth Half Marathon, and it's supposed to be cold and snowing. I plan to get up there shortly before the start, do very little for a warmup, use the first big hill as a warmup, and then take off when we get over the top of the first big hill at 2 miles. I'll run with whatever I have left in my legs, which will be a surprise if I have anything! And when the race is over, I'm done for the week. I'm not doing anything else. If it's not too nasty I'll go in the hot tub when I get home.

The sky is getting dark and the wind is blowing. It mirrors my mood. I hope there isn't too much snow in the morning. But whatever it is, I'll deal with it. I'll dress in warm clothes, and run for less than two hours of whatever the weather gods dump on us, and I should be done. Rule of twos: I can deal with anything for two hours.
Posted by Alene Gone Bad at 7:31 PM