Social Conscience...Wake Up and Smell the Autumn Roses 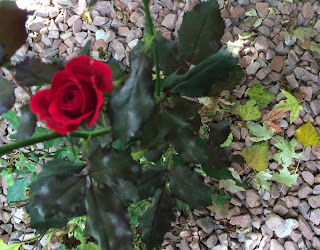 I don't have much running news to report since I'm into my taper. I had some enjoyable runs over the weekend because I was accompanied on Friday by Emma, on Saturday by Laura, and on Sunday with the Fort Collins Running Club for the annual fall club breakfast and run where we elect board members.

But organizations with nonprofit status often do make profits and enrich certain entities within their ranks, namely, people. Rather than go on too much about that, I'll get to the point.

I don't normally write about sports other than running, but this whole deal with Ray Rice and other domestic abusers in the NFL has me thinking about all of the questionable activity and abuse that goes on, not just in professional sports organizations, but in other so-called not-for-profit entities. As far as I'm concerned, I think the NFL should not be allowed to be nonprofit. Their main purpose as far as I can see, is to line the pockets of too many overpaid criminals and sociopaths within the ranks of the organization, from football players to owners. Same could be said for many other "professional" sports.

The good ol' boys club makes excuses and defends their members who get away with whatever they are able to hide, and often they don't even need to hide it.

Something happened the other day that got me thinking about nonprofits. I was out and about in town, distributing some flyers for a cancer exercise support group I'm starting. I'm doing it with the help of a local athletic club, they are donating the space and materials, and I am facilitating the group. Neither of our businesses are making a cent off of this. The only monetary benefit to either of our businesses is if someone joins the group and decides they'd like to either join the health club as a member, or hire me for private coaching services, but there is no obligation to do this in order to fully participate in the group.

There is no cost to join the group, we are not charging anything, and neither of our businesses have nonprofit status. However, we are offering it for the benefit of people in the community, to improve their health and well-being at a time when they need help.

As I was out distributing the flyers, I'd go into coffee shops and other places with bulletin boards and ask if I could post my flyer. 95% of the time, the answer is yes, sure. And many of the people I spoke with in the businesses were supportive of the idea of the group and even thanked me for doing something like that.

However, there were a few who said no, or "we have to think about it", their reason being, we only post flyers for nonprofits.

Fair enough. I can understand that if every business tried using their boards for marketing, they'd be inundated with garbage on their walls.

However, two of the entities who said no were Starbucks and the local public library. Starbucks has it's own policy and they are a privately held business so I can understand that, but when I looked at the other flyers on their board, there were several that I thought didn't fit the nonprofit category, for example, an author trying to sell a self-published book.

With Starbucks trying to promote itself as a socially conscious company, I just felt that something offered free to benefit the community in this way would be more appropriate for the board, but that's Starbucks' decision. Even though as two small local business doing something for the community and regular customers of Starbucks, maybe there would be some consideration, in light of the author flyer up there on the board. I let it go.

At the public library, however, you would think they'd want to promote community health. We are two small local businesses. If the big healthcare organizations in town, which have nonprofit status, put similar flyers up with free offerings for community health, there wouldn't be a problem. However, those organizations rake in multimillions of dollars in PROFIT each quarter. Yes, PROFIT.

Yet the people at the tops of these organizations often have very exorbitant salaries and benefit packages while they skimp on the bottom of the organization, namely, the people who do the work. The top brass ask them to work harder and harder for less and squeeze them, they lose jobs and livelihoods when staffing is cut to reduce costs, when those at the top have no worries about paycheck to paycheck subsistence. If they get fired, they have a golden parachute to a new multimillion dollar salary.

All those expensive consultants they hired to help them adjust to the demands of health care reform somehow conveniently ignored the costly legal expense of protecting their electronic health record systems in their rush to grab money. Security is expensive, but somehow these smart guys forgot to include that little detail. Funny how that works. And when these organizations have to start spending megabucks on security upgrades and experts, guess where the costs will be passed along?

The consumers. Yes, you and me.

If we would invest in the needs of the people, instead of the wants of a few criminals and sociopaths, maybe we could justify having nonprofit professional football leagues and health care organizations, that generated money for real health, education, and addressing poverty.

All I have to say is, think. Wake up and smell it.