Year of the Haboob 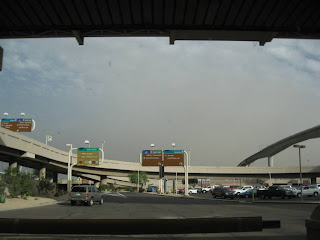 I went to Phoenix this past weekend to visit my dad & stepmom and flew into a haboob. Almost.

The flight from Denver was uneventful until we approached Phoenix. We were arriving early, but as we got closer to the city I saw how dusty and hazy it looked. Then I realized we were going to get a tour of Phoenix by air, multiple times, as we circled the dusty valley before we could land. We ended up circling the city for about 20 minutes, just enough to mess with my head so I'd have a slightly queasy feeling for the next 24 hours.

Dad picked me up at the airport and we drove east on the freeway toward Scottsdale and Tempe, and this is what the sky looked like as we drove further east. You couldn't even see the little mountains in town. When we went to Havana Cafe for dinner Camelback Mountain, just a mile away, was hazy. 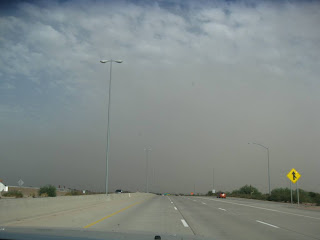 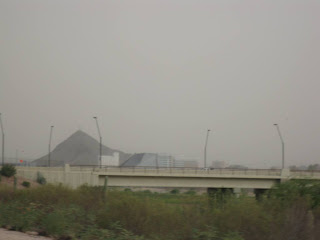 I thought, I will be spending the weekend in a haboob. 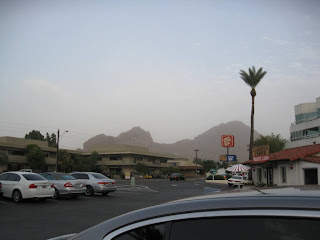 During the night it rained and blew the dust out, and Saturday morning was perfectly clear. It was cool, just 46 degrees, and I met my friend Chris Harrison near the canal at 68th and Indian School for a 10 mile run. My ankle felt fine, even on the soft dirt of the canal after the rain, and we kept a good pace. 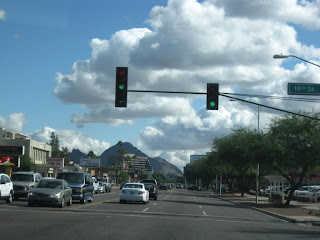 It was a laid back weekend. Dad and I visited the running stores, didn't buy anything, but just looked around. The day was one of those perfect winter Arizona days that makes you understand why people might think Phoenix is a good place to live. The little fluffy, puffy clouds in the clearest blue sky that I've never seen anywhere other than Arizona were out and it was a perfect weekend for weather.

We watched the LSU vs. Alabama football game, my stepmom is a native Louisianan.

Sunday morning I ran 7 miles on the canal again and felt fine. Managed to get 32 miles of running in for the week, my biggest mileage week since Badwater. I am making progress.

I've been starting to think about next year's running plans. I'm hoping that things pan out for a fun little adventure run in the Black Hills with a few friends, not a race, but a multi-day training adventure next summer. Low key, low budget, low stress.

I'm looking ahead at a multiday race in New York, most likely in 2013. And other than that I'm going to stick close to home, save my money, and find some good local races, within a day's drive or so in 2012.

I'll be back in Phoenix again in just 8 weeks. I hope Across the Years will be haboob-free.

In the coming weeks Journey to Badwater will be getting a new look. Some of the things on the right-hand side of the blog will be rearranged, and might go away for a short time. I'd like to hear feedback on the new look once it happens, which should be within the next 2 weeks.
Posted by Alene Gone Bad at 6:38 AM