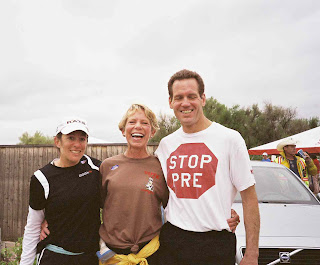 Several months ago, I asked my friend Cathy Morgan if she would crew for me at the Wyoming Double Marathon over Memorial Day weekend. She said she would, if Dennis would also crew and keep her company. I don't usually ask Dennis to crew for me, as he doesn't like to crew, and it's not generally a good idea to have your spouse crew. He worries about me and I get annoyed with him, and we argue over stupid things. Like how much peanut butter to put on the bread. But I asked him and he said yes, so the three of us were all committed.

We woke up at 3:15 am to the coffee pot and Buffaloes who were not happy about being left home all day. It would have been too much time in the car and they wouldn't have been able to play outside much. There's too much recreational traffic on the roads during the holiday weekend, not to mention the added crew vehicles and runners.

We picked up Morgan at 4 and drove up to the Lincoln Monument off I-80 about 12 miles east of Laramie. I picked up my race number, used the bathroom and we lined up for the start. The wind was blowing as usual, it's Wyoming. The heat training must be paying off because I was freezing. I saw Doug before the start. Holley from the running club was there and she started early. (From left, Dennis, Doug and me before the start)

I put extra layers on, and we were off. The race course is pretty nice for most of the way. It consists of a double out-and-back along dirt roads through the Vedauwoo area in Medicine Bow National Forest. It winds through aspen and pine forest, and the rock formations are really interesting. There are marathon and half-marathon races that start with the Double and Nick from my Badwater crew was out there in the half-marathon. When I saw him, he was in third place and looked strong! Way to go, Nick!

There is a two mile stretch along the I-80 frontage road and it wouldn't be so bad except it is the highest, most exposed area along the whole course and since it's a double out-and-back, you have to do it 4 times. And it's windy and cold, and there are no trees to block the wind. 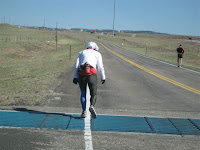 I suffered through that first stretch and forgot to ask Morgan and Dennis to stay in sight, I told them to meet me once I got off the frontage road. Big mistake. I suffered out there for the whole two miles without being able to get an extra jacket, for a fourth layer! It's so cold, there's still snow up on the side of the road. 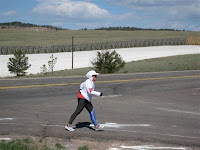 As the race went on and down into the trees again, I warmed up. I was feeling good the whole way. I tested Slim-Fast, I'm trying all these different liquid calorie supplement for Badwater, trying to find something that won't upset my stomach. I had 3 cans of Slim Fast and it worked well. I was able to take off running right after I drank it. 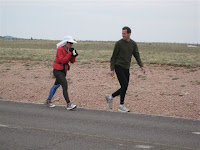 I stayed well-hydrated but my biggest challenge of the whole day was trying to figure out the wind direction whenever I had to stop and pee. The first time I was in the wind, I had to use the shelter of the car to block the wind, but I miscalculated and ended up peeing down my legs and into my socks. Not good. The second time I had to re-arrange my position to avoid repeating the same mistake.

The next few times I got progressively better but it was still a challenge. Later in the day the wind died down and it was a lot easier. 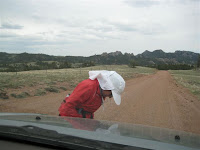 I stayed comfortable all day. I only had two "bad" patches that were over with quickly. The first time was 33-34 miles on the frontage road, and I was low on energy, but then another runner caught up wth me and we got to talking. His name was Kevin and he's from Lyons. We started talking Badwater and ultras in general, and it got me out of my bad patch and back into running. 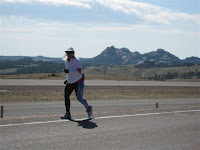 The other thing about that frontage road is the irony of the billboard up there for Little America. It has this picture of this couple standing in a swimming pool, looking totally relaxed. The billboard says, "Overheating?" As if anyone at that location in Wyoming would ever be overheating. With 30 mph wind and 4 foot snow cornices below the billboard at the end of May! 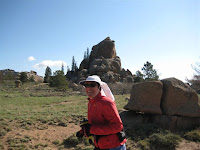 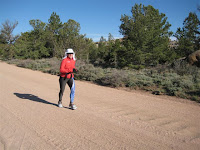 One of the best things about running ultras is the amount of time you're out there, able to be present-focused, not worried about anything outside of what you're doing. You focus on how your body feels, not intentionally, but you get lost inside where you are at the present moment, which is such a good escape from the world.

I was having one of those days out there where I felt like I was a million miles away from all the other things going on in my everyday life and it felt like a vacation. It makes all the little stupid problems, other people's issues and baggage, and really unimportant things that we deal with on a regular basis, go FAR AWAY.

I felt good the whole way, and I didn't feel tired at all. Around 45 miles the only thing bothering me was my stomach. I wasn't nauseated but I needed some different food and nothing sounded good. The wind wasn't blowing anymore and it was 4 miles of solid uphill to the finish. I finally stripped down to two layers around 46 miles.

When I was low on energy between 45 and 48 miles and my stomach was rejecting the idea of everything Morgan and Dennis offered me, Kevin caught up to me again. I managed to eat a gel packet, and our conversation got me going and Kevin and I ended up finishing together. I finished the 52.4 miles in 11 hours and 22 minutes. A long, slow day, 51 minutes slower than last year, my slowest time ever on this course. But that's fast enough for Badwater training.

My feet were good, no blisters. Just the usual heat rash.

Katy was there at the finish with her dog, Kira.

We drove back to Fort Collins, took Morgan home, and went home to see the Buffaloes. I was in bed by 8:15. I woke up too early Monday morning but I got my laundry done and some packing for Vegas, and then we went to the Houska Houska. It was fun, I felt good and it was good to see everyone. Here's a picture of Barb Brown from the Foundation with me at the Houska Houska this morning.

The t-shirts at Houska Houska were great, it was all about the election year and we voted with our cups at the aid station. I drank from my ballot and threw it in the Obama box. I finished in 25 minutes, 17 seconds. Faster than last year!

It was raining when we woke up today, it stopped for the race, and then about an hour after the finish it started raining again. Now I'm home, blogging, and thinking about a nap. I have to finish packing and get ready to go back to work tomorrow. In a few days, I'll be running across Death Valley, but I won't be freezing. 110, 115 degrees would make me happy.

Congrats on a new course PR! I found your blog through Adventure Corp and put it all together after I saw you during the race yesterday! That is so funny you met up with Kevin! I actually have known him for over 2 years. I met him at a Leadville Trail training camp. He's pretty funny!

It is so fun to see how you are preparing too for BW! I hope it warms up for you. I am heading there in 2 weeks and can't wait! Good luck with everything!

Thanks Jamie! You flew by us right before I met Kevin and we were talking about you. Congratulations on your run yesterday. You looked awesome and I hope you keep that momentum going all the way to the Badwater results you want. And I know that no one will want that more than you!