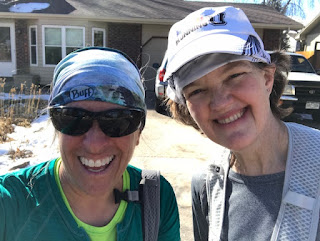 This weekend was my annual urban adventure birthday run. This year I couldn't think of any good themes except that I was turning 55 and 55 miles was a perfect distance. I didn't want to do it all in one day, I prefer to spread it out so my friend Burke Painter in AZ gave me a great idea- he recently ran 72 miles in 72 hours on his birthday, so I borrowed the theme.

Fifty-five miles in fifty-five hours was not hard to do on its own but this time of year the weather can add a dimension of challenge, or misery. We've been having a really crappy time lately- it's been unusually cold, windy, snowy, and overcast for much of the past month or more. Usually by now we are alternating between bouts of winter weather and spring-like conditions, but we haven't seen much blue sky lately and it;s been getting to everyone I talk to.

Watching the weather this past week, I knew I'd have to be flexible and creative with my running plans. Originally I planned for doing something like 30-20-5. Then I decided it would be better for my upcoming 24 hour run if I just split it between two days and then took Sunday off, my actual birthday, and just drink margaritas.

I planned to start at 6 am and my friend Elise was going to meet me on the Power Trail. Instead of setting my alarm, I asked Dennis to wake me up at 5 since he's up for work at that hour. But he overslept by a half hour, so I texted Elise and planned to get out the door by 6:30 am, which I did. I planned to run out 15 miles or so, come back to the house and get Velcro and Gypsy and take them for a run at the end of my day.

I ran down the Power Trail, met Elise and her dog Maya, and we headed toward Loveland before she had to turn around and go to work. I continued on to Loveland, posting live videos every few hours as I thought of something to say. It wasn't too bad out- overcast, but not super cold. As the day went on the sky got darker and the wind picked up. I ran quite a bit but I was only trying to average four miles an hour, what I really need to do is work on my walking.

I took a short detour once I reached Eisenhower and went to a 7-11 at Eisenhower and Boise and bought some drinks and a banana and potato chips. I needed salt and calories, all I brought were bars and one PBJ. Then I went back to the bike path, and later, I was headed west along the Big Thompson River bike path in Loveland when I heard my GPS Map My Run app say I was at 18 miles. I had a Forrest Gump moment. I was totally out in space, didn't realize I had gone so far. So I turned around.

When I got back to Eisenhower I realized it was a good 10 mile stretch between there and any other stores or retail places where I could get food, so I stopped for lunch in a restaurant and got a grilled cheese sandwich on gluten-free bread. It was really good. After I scarfed that down, I headed back north along Boyd Lake and back to Fort Collins, the weather was looking a little sketchy but I had extra clothing in my pack.

I knew it would be a challenge to get home in time and beat the weather to take Gypsy and Velcro out since I was on track to be at 36 miles at home instead of 30. I knew they would be super pissed at me, too, for leaving them all day.

I kept recharging my phone with my portable charger and posting videos. I was also listening to music in Spanish, like Bad Bunny, and working on rolling my rs, which is my personal challenge right now. I've been brushing up on Spanish, which I haven't used much in years. I also found out that Bad Bunny and I share the same birthday. I'm 30 years older than him.

On one of my videos, my longtime running friend Lynn Newton posted a comment and told me he uses a proverb for his out and back runs- "The outer I go, the backer I have to come." I love that. I asked him if I could borrow it.

Along the way it became apparent that my GPS was not working right. Miles that I knew were full miles were being measured as 0.8, 0.6, and according to the app I was on track to be home around 31 miles, which didn't make sense since it said I was at 18 at the turnaround. I had done a few little extra sections on the way out, so I knew that would be slightly longer, but no more than a mile. I figured I could check it at home on the laptop.

As I headed into Fort Collins the sky was dark. Dennis texted me that he'd be coming home early, so I knew the Wranglas (Gypsy and Velcro) would be happy. Just as I turned onto my street the rain started. I went in the house and got attacked and yelled at by the Wranglas. They were mad at me! They are used to having mom at home with them all day.

As it turned out, my GPS was way off. On the phone it said 31.7 miles but on the laptop it said 36.8 miles. Not sure what happened but I was happy to have the miles in.

I decided to sleep in on Saturday and not get started until 9, and finish up all the miles. It was the first sunny, blue sky day we've had. It was super windy in the morning- 25 mph wind. Crisann came to my house and we started at 9, went to Rigden Reservoir, and Dennis took the Wranglas there. Then we got back to my house at around 1 and Jen met us, then Jen and I went out for the last 6 miles or so. By the end it was 50 degrees and not too windy anymore. Best day we've had in a long time!

Again the GPS was off. I ended up with 19.4+ miles, which gave me 56 miles and change for the two days, beyond my goal. So today I'm blogging and headed to the Rio for margaritas.

All in all, it was a mellow but perfect birthday run. I had great friends with me, great conversations, and plenty of time to myself, too. I got the miles in and felt really good- legs and feet held up nicely. Palmer Lake is just 5 weeks away, but I won't need to do any more long runs before it- I can just run like a normal person.

I am thankful for my health and ability to do these miles. You just never know what can happen, so I try to enjoy as much running as I can and I'll keep doing it as long as I can. And we all have to do the best with what we can and where we are in life. I'll keep going outer and outer and hope I have the strength to go backer and backer, wherever I find myself.
Posted by Alene Gone Bad at 11:42 AM